I Spy With My Little Eye...

Entorhinal cortex: a small part of human and other vertebrates' brains that helps the hippocampus with memory and navigation... more

Hippocampus: the part of human and other vertebrates' brains that helps with navigation and memory... more 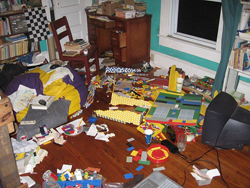 Even if your room is a mess, you can tell that your sibling took something. Wikimedia Commons- Luca Masters

Do you have siblings that like to mess with your stuff? Have they ever tried to take something and put it back so you would not know it was gone? Somehow, you always notice that someone touched something in your room. In the PLOS Biology article, “An Unexpected Sequence of Events: Mismatch Detection in the Human Hippocampus,” scientists examined what parts of the brain were responsible for you catching your siblings. Turns out it’s something in your brain called the hippocampus.

I Can Tell You Touched My Stuff!

The hippocampus is the part of your brain responsible for memory and learning. When you leave your room, you remember what the room looked like because of the memory stored in your hippocampus. You may have played the game, “Spot the Difference,” where you have to see what is different between two almost identical images. That kind of game is how scientists think your hippocampus works.

When you leave your room, you have a memory of how it looked. That is how you predict your room will look until you get back. When you walk into the room, your hippocampus compares the memory of your room with what it looks like to spot any differences.

One of These Things is Not Like the Other…

Scientists set up an experiment to see how your hippocampus works when you catch your siblings in the act. The scientists had many people look at images such as the ones below. Look at the first image at the top labeled “First Presentation,” and compare it to the images titled “Second Presentation.” One of the images is the same, another is just a little off, and the third is very different.

In the experiment, scientists displayed the “First Presentation” to test subjects several times. Then participants saw different images in the “Second Presentation.” While showing images to people, scientists also scanned their brains to see what areas helped people notice the differences between images.

The entorhinal cortex is highlighted in red.

The scientists discovered that the hippocampus and a tiny region of the brain called the entorhinal cortext helped spot the differences. The test subjects used the hippocampus more when they compared the original sequence to the second sequence, because your hippocampus is really good at spotting differences in patterns. For example, participants thought they would see a hat, but saw an orange instead. Those small changes surprised the hippocampus.

When the image order was more random, the entorhinal cortex was more active. Instead of seeing a pattern and using the hippocampus, your brain instead uses the entorhial cortex to sort out the information.

“My Sister Has Been in My Room Again!”

So how does this relate to catching your sibling sneaking in your room? If something small was out of place, like a toy or a book, your hippocampus would notice that difference. But if you walked into your room after your sibling threw clothes all over your floor, your entorhinal cortex instead of your hippocampus would register that change. Who knew that playing “Spot the Difference” was such a complex process?

The hippocampus in your brain (shown in red) is watching out for your stuff.
An Unexpected Sequence of Events: Mismatch Detection in the Human Hippocampus
Learn how to read a scientific article