Amblyopia: also called “lazy eye,” amblyopia is a vision disorder where there is a problem with the optic nerve that sends information from one of the eyes to the brain.

Neuroplasticity: the ability of the brain to change in response to new experiences... more

Visual cortex: the part of the brain that processes what you see... more 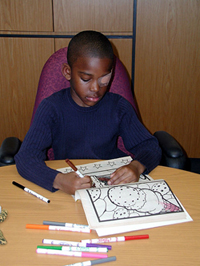 In order to treat amblyopia, some children have to wear an eye patch to correct their vision.

Amblyopia is a vision disorder that usually occurs in one eye and often happens in children. It is commonly known as “lazy eye.” Unlike many vision disorders, the problem is due to the brain messing up visual information rather than a physical problem with the eye. This results in the brain “ignoring” the information sent by the eye, which leads to poor vision. 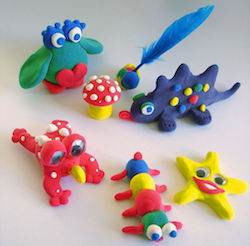 Many doctors used to believe that amblyopia in adults could not be treated because the adult brain was fully developed. However, scientists now know that this is not the case thanks to something called plasticity in your brain.

Plasticity means that your brain can still be shaped and molded even after you are an adult. Think about playdough. If you play with it and leave the playdough out, it will harden and then you cannot mold the playdough again. This used to be how scientists thought adult brains worked. Now they think that your brain is like playdough that never dries and can be remolded over time. So when you learn new information your brain reshapes itself to reflect those changes.

What Does This Have to Do with Video Games?

Scientists thought that playing certain types of video games would improve the vision of adults with amblyopia. They used two games: SIMS and Medal of Honor. SIMS is a slow-paced, non-action game where you create a whole world for characters to live in, and Medal of Honor is a fast-paced action game that involves a lot of shooting. 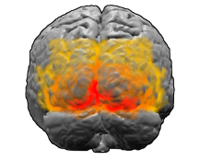 This is a view of the back of your brain, with the visual cortex highlighted in red and yellow. Wikimedia Commons- Washington Irving

For the experiment, the test subjects played video games between 40 and 80 hours (2 hours per day) over the entire course of the experiment. They tested these two different types of games because they thought that the type of game could make a big difference in treatment. Turns out they were right. People with normal vision have improved visual ability after playing action games like Medal of Honor. However, people with amblyopia had improved vision when they played non-action games like SIMS.

The scientists then started to wonder what is going on the brain to make this happen? The research team believed that video game playing made the visual and parietal cortex of the brain change. The visual cortex of the brain is responsible for interpreting the information sent from your eyes so you can see the world around you. The parietal cortex is the part of your brain responsible for sensory information like touch, pressure, temperature, and pain. 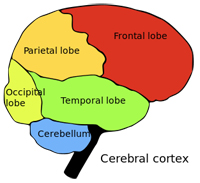 In addition to the visual cortex, the parietal lobe was molded by video game play.

In this case, the video games were causing neuroplasticity. Like playdough that never dries out, the brain was slightly remolded in the areas that processed video game information. In this case, the visual cortex and parietal cortex were changed. By playing video games, adults with amblyopia made their brains stronger at processing the visual information from the game. As a result, their vision improved and the eye that had been "lazy" became stronger.

Thanks to studies like these, video games may become an established therapy for adults and children with amblyopia. Of course, the positive benefits of video games can apply to children and adults without amblyopia. So your parents may tell you that playing video games will ruin your brain. Now you can tell them that it is actually helping your brain and then invite them to play too. 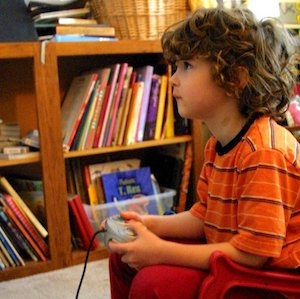 Tell your parents that video games are good for your brain and your eyes.
Video-Game Play Induces Plasticity in the Visual System of Adults with Amblyopia
Learn how to read a scientific article