Industrial Revolution: a time of development from the late 1700s to the mid-1800s that led to increased use of machines, factories, and energy, and that resulted in increased pollution....more

Productive: getting a lot done or providing a favorable environment with food and shelter for many organisms to grow.

Road diversion: a special route for use by traffic when a road is temporarily closed or has restrictions.

Trophic flow: the transfer of energy between trophic levels in a food web....more

Trophic level: a position in a food web, based on relationships with other organisms in the food web....more

It’s noon and your stomach starts rumbling—you’re hungry. You want to get some Japanese ramen for your empty stomach. Stepping out of your house, you are hit by a wave of heat. 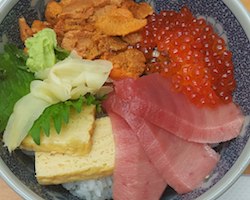 What would happen if the fish we rely on for food was no longer available? Image by Douglas Perkins.

“Maybe I should get a cold lunch like sushi instead,” you think. “Hot ramen may not be good on this hot day.” Other people had the same idea, and the restaurant has already sold all of its sushi for the day. You go off to find something else that is cold for lunch.

Weather often affects your food choice. You might drink more hot chocolate in the winter, and eat more ice cream in the summer. Something similar can happen in the sea. When temperatures warm up, some organisms may be found in greater numbers. Changes like these impact what is being eaten in the ocean. But what would happen if an organism was “sold out” in the sea?

Researchers discuss how the changing climate can alter the feeding relationships in the sea in the PLOS Biology article “Climate Change Could Drive Marine Food Web Collapse Through Altered Trophic Flows and Cyanobacterial Proliferation.” They may have some sad news – the marine food web could collapse. And the clock is ticking. 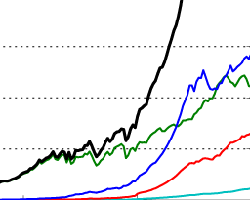 Standing in a corn field, you see a machine drive by, picking corn off the plants. A lot of work that used to be done by hand is now done using machinery. This trend started in the late 1700s and increased heavily by the 1900s. The increase in machines and power usage was called the Industrial Revolution. All of this production put off a lot of air pollution.

After the Industrial Revolution, the amount of carbon dioxide (CO2) in air rose drastically. This increase in CO2 caused many problems in today’s world, including two big ones: climate change and ocean acidification. Because of these changes, our oceans are getting warmer and more acidic. How will this affect relationships in the sea?

A Taste of Trophic Levels

Species are highly connected to one another. The changing climate can alter their relationships. To understand how these relationships change, let’s look at how we divide organisms in a food web. Different levels of the food web, or food chain, are called trophic levels. “Trophic” just means related to eating. So let’s look at the different eating levels of a web.

A food web showing the feeding relationships among organisms in the Canadian arctic. Note that some species have more than one food choice (e.g. narwals eat fish (cod) and benthic, or ground dwelling, invertebrates). Also note that some species are a common food choice to more than one predator (e.g. cod are eaten by seabirds, seals, and some whales). Image from "Current State and Trends in Canadian Arctic Marine Ecosystems II," by Darnis et al., in Climatic Change. Click to enlarge.

Primary producers (like plants) are at trophic level one. They use sunlight to make sugars to feed themselves. The next level has herbivores, or plant eaters. These include large animals like deer, and tiny animals, like zooplankton. The third level is filled by animals that eat other animals. For example, small fish eat zooplankton. Some food webs have a higher levels, with predators that eat animals from the level below.

In these feeding relationships, the energy stored in prey flows to predators, up through trophic levels. This is known as a trophic flow. And because each organism may have multiple food choices, a food web is created, instead of just specific food chains.

Humans are part of marine food webs, as marine organisms, like fish, are part of our diet. Billions of people depend on fish for nearly one-fifth of the animal proteins they eat. With such a dependence on marine food webs, we need to understand how the changing climate may affect the oceans. 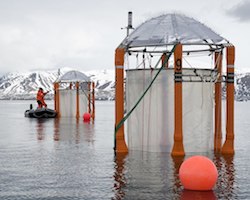 Mesocosms can be built on land to hold water, or they can be created in the marine environment. Click for more detail.

Researchers built 12 mesocosms to study how changing climate affects marine food webs. The word “mesocosm” comes from two Greek words: meso– means “medium”, and –cosm means “world”. They are “medium worlds” that researchers build, with habitats and organisms inside. Researchers can then experiment within these man-made worlds. For this study, the mesocosms were about the size of a hot tub, which holds around 1,800 liters of water (almost 500 gallons).

The researchers split the mesocosms into four groups, or treatments. In the first, they matched current conditions in the ocean. In the second, they increased the CO2 level to 900 ppm (“OA” treatment). In the third, they increased the temperature by 2.8°C (“T” treatment). And in the last, they combined those CO2 and temperature increases (“OAT”). They also called OAT the “business-as-usual” condition, as this is where our environment will end up in the year 2100 if we keep polluting as much as we do now.

Researchers treated the mesocosms for over four months, and measured the effects on the amounts of plants, invertebrates, and fish. They weighed the organisms at different trophic levels. Then they determined the energy flow by comparing the weights among levels. 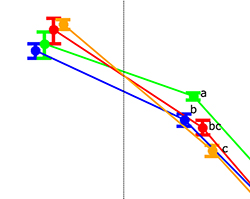 How did the treatments affect energy flow between levels of the food web? Click for more detail.

Energy can neither be created nor destroyed. Energy in producers must end up somewhere else, if it is not available to higher trophic levels. These altered energy paths are like road diversions in your city. The carriers cannot efficiently deliver the goods to the receivers, and the energy ends up on a different route.

But what makes this happen? What are the “diversions” that keep this energy from moving through the food web as it would usually?

Cyanobacteria (blue-green algae) are bacteria that capture sunlight and make food. They are producers, in the first trophic level. However, to avoid being eaten, some cyanobacteria release toxins that can kill. Because of this, most herbivores prefer another food choice, turf algae. 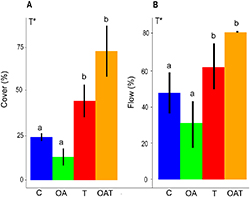 How did ocean acidification and warming affect bacteria and algae? Click for more detail.

In this study, researchers found that cyanobacteria grew better in warmer waters. But herbivores did not eat these cyanobacteria. This means more food was produced at trophic level one, but the energy did not flow to trophic level two or beyond.

Meanwhile, carnivores at higher trophic levels needed to eat more herbivores, because they had higher energy demands in warmer water. Herbivores were sandwiched; they ate less, but were eaten more. The death of herbivores eventually could no longer support the food web. The energy in uneaten cyanobacteria built up at the base of the food web, and organisms at higher levels didn’t have enough food to survive.

No More Business as Usual

In this way, future warming could very likely cause marine food webs to collapse. Considering how much we depend on fish, that’s a scary thought. If we don’t change our ways, and reduce our carbon emissions, our oceans may soon be less productive and vibrant than they are now. 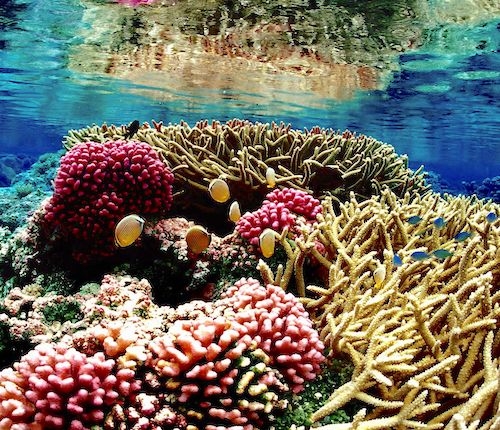 Our oceans are warming and becoming more acidic. What does this mean for marine life?
Climate Change Could Drive Marine Food Web Collapse Through Altered Trophic Flows and Cyanobacterial Proliferation
Learn how to read a scientific article