Control group: an experimental group that is used to compare the effect of different treatments.

Occipital cortex: the part of the brain responsible for processing what we see.

Pathway: a route for communication or action, whether between parts of the brain that perform a specific task, or within and between cells of a developing body.

Sensor: a tool that senses physical properties, like motion of a person or object.

Temporal cortex: the part of the brain responsible for helping us to identify objects in our environment by combining information from our memory with what we are seeing. 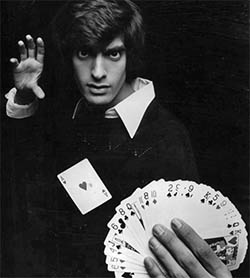 You’re sitting at the edge of your seat as the magician on stage raises his hand to reveal a large, shiny gold coin. Right before your eyes he waves his hands and the coin is gone. He shows you his open hands to reveal that the coin seems to have disappeared.

You sit back in your seat thinking to yourself, “How in the world did he do that?” In the PLOS ONE article “The Magic Grasp: Motor Expertise in Deception,” scientists set out to understand how magicians are able to trick their audiences.

Scientists wanted to know if magicians can move their hands in a way that is somehow different than that of an average person. Maybe every hand wave or fake grasp is unique and this is the secret to becoming a great magician.

Reach for the…. Air? 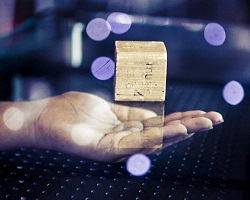 Though this image is a trick of photography, some magic tricks deal with moving fake objects. Image by Faisal Akram.

If you aren't a magician, it may seem silly to you at first to grasp at fake objects and pretend you see things that aren't there. It might be even sillier to have someone watch you do these things. But that is exactly what these scientists did.

Scientists wanted to study if magicians are better than others at making movements using fake objects. They asked subjects to reach, grasp, and move an object using a normal or pretend motion. With the normal motion, the object was really there for the subject to touch and move. With the pretend motion, the object was there in front of the subjects, but they had to pretend to touch and move it.

While these movements might seem silly at first, they are very important skills to have in the magic trade. The best magicians are really good at tricking their audiences into believing these pretend movements. 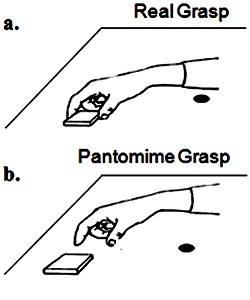 This figure shows what it looked like when subjects performed a real (a.) and pretend, here called pantomimed (b.), grasp.

The goal of the experiment was to see how subjects moved to grab an object, but how can we measure movement?

Luckily, scientists didn't need any magic to make this measurement. They had special small sensors that they placed on the subjects’ fingers. Cameras in the room were able to track the sensors. This showed the scientists exactly how subjects’ hands and fingers moved when they grabbed or moved a real object, versus when the object was fake. This is almost the same way a video game system can track your movements when you play an interactive game.

The scientists found that magicians really were able to move in a way that was different than the average person. Magicians made their pretend motion look just like they were really grabbing the object. When scientists measured the movements they could not observe any differences. Those who were not magicians were not able to do this. Scientists were able to see differences when they compared the real and pretend movements of control subjects.

Fire Up Your Imagination

Scientists learned that magicians could move in a way that was unique to an average person, but they still didn’t know how they were able to do this.

These graphs show the main findings, that magicians move differently than the average person. Click for more detail.

Unfortunately, magicians never reveal their secrets, so scientists had to run one more test to figure out the trick. In this last experiment, scientists tested whether seeing an object was necessary for magicians to make such believable fake movements.

Scientists asked subjects to perform the same pretend motion that they did previously, but this time they did not have any object in front of them. In this case not only did the subjects need to perform a pretend motion, but they needed to use their imagination to think about the object they should be grabbing.

As it turns out, when the object was out of sight, the magicians were no better at making the fake movements appear real.

These findings bring good news for magicians. They can move differently than the average person. This makes them good at tricking their audience (and shows us that not just anyone can perform magic tricks well). But we also know that their ability is only possible when they can see the object they are using to trick you. 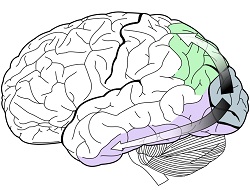 This image of the human brain shows the locations of the “where” (top arrow) and “what” (bottom arrow) pathways. Click for more detail.

Scientists believe that these differences are due to changes in two important pathways in the brain. These pathways are commonly known as our “what” and “where” pathways. The “what” pathway tells us the identity of the object we are going to touch by letting us know the details of what we are seeing.

Once we know what we are dealing with, the “where” pathway can tell us where that object is in front of us so we can reach out and grab it.

Scientists believe that magicians somehow change what’s happening in their “where” pathway. Their brain is telling them where the object is, but they can act as though it’s in a different location. This is the key to their ability to perform these pretend motions so well.

Can Magic Change Your Brain?

We’ve learned that, with practice, magicians are actually able to change the way their brain uses information to improve their ability to trick an audience. The next step is to understand what these changes are. It’s possible that different parts of the brain become better connected, or the areas of these “what” and “where” pathways become larger.

Hopefully one day we will understand fully what other parts of the brain are also important in helping magicians hide that gold coin.
Additional images via Wikimedia Commons. 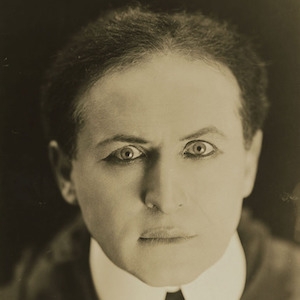 Harry Houdini is one of the most famous magicians, known for his escape acts.

The Magic Grasp: Motor Expertise in Deception
Learn how to read a scientific article