New World Under the Sea

Divergence: when groups of organisms from the same species become separated and evolve differences as they adapt to new environments.

Endemic species: a species that has adapted to live in a particular place and that isn't found anywhere else.

Southern ocean: the ocean that surrounds Antarctica. It has extremely cold waters.

Speciation: when two groups of organisms become so different that we describe them as different species.

Let’s take a walk along an ocean beach. As we walk the moist sand feels good to our bare feet. The waves spill onto the beach and the salt water slowly makes its way back out to sea. Tiny crabs are busy digging and repairing tiny tunnels while seagulls gather around and fight over a stolen piece of bread. In your hands are the colorful shells gathered and destined for a shelf at home. 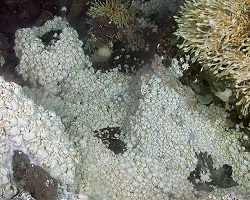 A large population of Kiwa crabs clinging to the hydrothermal vents. Click on image to enlarge.

In the PLOS Biology article, “The Discovery of New Deep-Sea Hydrothermal Vent Communities in the Southern Ocean and Implications for Biogeography,” scientists describe a newly discovered ecosystem off the coast of Antarctica that’s miles below the surface. This ecosystem is full of new species that have never been seen before, and that live nowhere else in the world.

Everyone knows that the ocean is home to many different animals and plants. Near the surface, you might see dolphins, swordfish, and seaweed. But what happens when you travel down into deep waters? How about a mile and half deep? At this depth, it’s completely dark. If you were to dive that deep you would be crushed by the pressure of all of the water above you.

Scientists used to think that nothing could live in the deepest parts of the ocean. But now we know that there are some strange and fascinating sea creatures that call the deep sea home.

Not long ago, scientists exploring the deepest part of the Southern Ocean found a bustling community of organisms on the sea floor. Those animals live near gigantic hydrothermal vents. 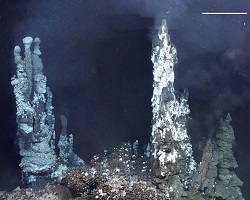 Hydrothermal vents in the Southern Ocean giving off black smoke.

A hydrothermal vent is like an underwater chimney, spewing out water as hot as 644 °F! That’s almost twice as hot as the temperature at which food gets baked in your kitchen oven.

Some vents are called “black smokers,” because they spew minerals and nutrients that turn the water black. The nutrients in the plumes of black water are food for the animals that live there.

What Can Possibly Survive Down There Anyway?

Humans can't survive long without air or sunlight. We wouldn’t last a minute in a hydrothermal vent ecosystem. But some organisms have adapted to living in the dark, under all of that pressure. At the surface, animals rely on plants that convert sunlight into food. But there isn't any light at the bottom of the ocean.

The animals around hydrothermal vents survive by eating special bacteria that make food from chemicals like sulfur and nitrogen that come out of the black smokers. Those bacteria are called chemotrophs, because they get their energy from chemicals in the water instead of sunlight.

The scientists who explored the Southern Ocean found mussels, barnacles, and Kiwa crabs that all rely on those chemical-eating bacteria. They also found sea stars, and even octopi. I know what you’re thinking: we see crabs and starfish on the beach too, so what’s so special about this ecosystem in the deep sea?

Searching for Clues on How It All Began 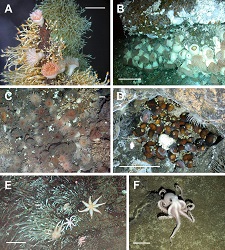 Organisms living and growing around the hydrothermal vents. Click for more detail.

Believe it or not, there are many other hydrothermal vent ecosystems in other oceans on this planet. What’s so interesting about this community in the Southern Ocean, then? Well, the species found in this particular ecosystem are similar, but not exactly the same as the species found at other vents in different oceans.

That means that the animals at the vent in the Southern Ocean are related to the animals at other hydrothermal vents. But since the vents are so far apart, over time they have evolved to have their own unique features. For example, they can survive in frigid polar water where other organisms can't survive.

When different groups of organisms from the same species are separated and evolve to have different traits, scientists call that divergence. Eventually those organisms become different enough that we call them new species. The process by which they become different species is called speciation.

The scientists who discovered the new ecosystem in the Southern Ocean wanted to know how the species there are related to the species at other hydrothermal vents. First, they compared the DNA of the species at each site.

DNA is passed on from parents to their offspring, and sometimes there are small changes in the DNA. Those changes add up over time.

So the scientists counted the number of differences between the DNA of the Kiwa crabs in at the Southern Ocean vent and the DNA of the Kiwa crabs at other vents. They did the same thing for the barnacles and snails, too. They found that the species at the vent in the Southern Ocean probably diverged from their closest relatives around 12 million years ago. That's about three times earlier than our ancestors started walking on two legs. 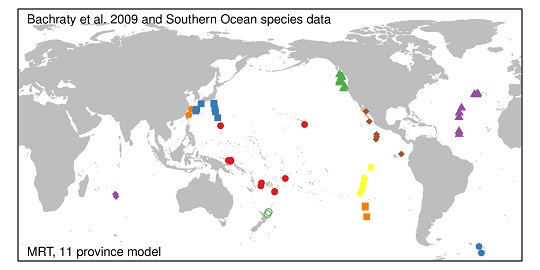 Since the water in the Southern Ocean is so cold, organisms from other oceans can't survive the freezing temperatures. Scientists think that this is why the organisms living in those ice-cold conditions have been isolated from their relatives for so long.

When a species evolves adaptations to survive in a particular place and they are not found elsewhere, they are known as endemic species. Scientists think that many of the species living near hydrothermal vents in the Southern Ocean are endemic. They are found nowhere else in the world. Studying endemic species is important, because it helps us to better understand how new species form.

So the next time you go to the beach, take a second look at the vast ocean in front of you. Below the surface, there are animals living in the darkest, coldest, most extreme corners of the ocean. Studying those animals gives us clues about how the many different species on earth came to be. 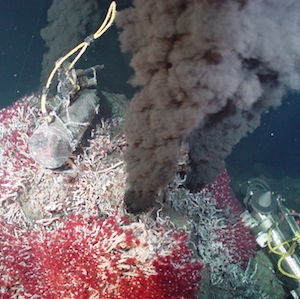 Scientists keep equipment near some ocean vents to study surrounding conditions.
The Discovery of New Deep-Sea Hydrothermal Vent Communities in the Southern Ocean and Implications for Biogeography
Learn how to read a scientific article