Is It Easy Being Green?

Amphibian: a group of animals that depend on water during the beginning of life. Amphibians include frogs, salamanders, and caecilians......more

Aposematism: bright colors, loud noises, or other easily detectable features of an animal that act as a warning to predators about toxins, venoms, or other defenses. A bee's yellow and black colors are an example of aposematism......more 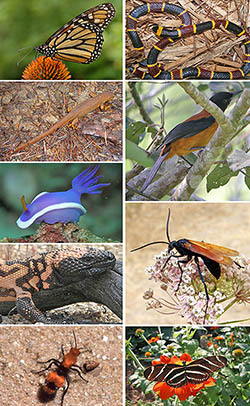 The animals above all use color to warn predators that they have poisons, venoms or other defenses to protect themselves. Click to enlarge and for more details.

Imagine you’re a frog in the rainforest. You love living there, but you always have to be aware of looming birds, snakes, and other hungry animals that want you to be their next meal. Luckily for you, you are poisonous and this helps protect you from predators. The question for you is - should you be dull or brightly colored? If you are dull and blend in with your background it would be harder for predators to see you. If you are brightly colored you can warn attackers of your poisons. If you are like many frogs that are poisonous, you choose to be bright and colorful. Your next question is which colors will work best to keep you safe? Scientists wondered the same thing.

To answer our question, we could test what colors work best to protect frogs and warn predators of poisons, and then test how well brightly colored animals survive in the wild. One group of scientists did exactly this. In the PLOS ONE article, “Inferring Predator Behavior from Attack Rates on Prey-Replicas That Differ in Conspicuous,“ the scientists looked at poisonous frogs and how bright colors affect attacks on the animal. 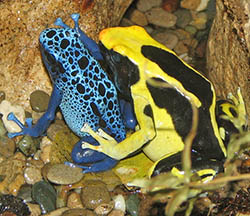 Two poison dart frogs with bright colors. Poison dart frogs are extremely poisonous to protect themselves from birds and other predators. Click to enlarge and for more details.

Poison dart frogs are bright and colorful amphibians found in Central and South America. Their name also tells part of the story. Native people of South America use the frogs’ poisons to coat their blow darts for hunting and for combat. These frogs' poisons are believed to be one of the most poisonous in the animal kingdom and potential predators like birds avoid attacking these frogs. Poison dart frogs come in many different patterns and colors. Could the different colors and brightness matter? Scientists proposed the hypothesis that frogs of one color get attacked less than other colors. 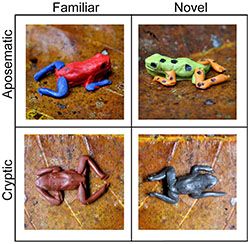 Of the non-jungle models, one was bright yellow and one was black. You may be thinking that a brown or black model would be very difficult for birds to see against a dark brown background in the jungle, and you are right!  If the colorful models are attacked less than dark models that are difficult to see, this tells us that having bright colors is an important way for a frog to protect itself from predator attacks.

By making four different models, they were able to ask two questions.

Answers to these questions help to us understand what color works best for warning predators.

What Does a Bird See?

The scientists also wanted to determine how birds see the bright or dull colors of frogs in the jungle. We take for granted our color vision and assume all other animals see what we see, but birds see more colors than us (Learn more at http://askabiologist.asu.edu/explore/seeing-color). Scientists use bird visual schemes to determine what birds are actually able to see and if the birds can see the different colors of Play-Doh models. 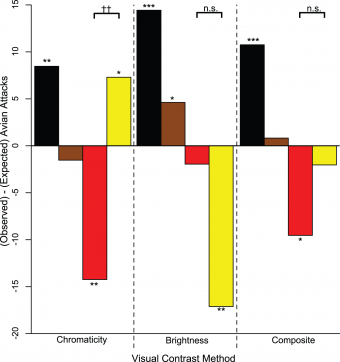 Bright colors are a great way for frogs to protect themselves and warn predators that they are poisonous. Scientists found red frogs were attacked the least compared to the black and brown frogs. Click on the figure to learn more.

More to the Story

The scientists went one step further and looked at how likely the different Play-Doh models were attacked based on how easy it is to detect the different colored models. For example, the red model is much easier to see than the black model and therefore the red model will be found by birds more often and should be attacked more than the black model. This is where the bird visual schemes are important. The researchers calculated how likely each clay model was to be attacked. The number of attacks was based on whether the model frog’s colors were different from the colors in the jungle or similar to the colors in the jungle.

What Did They Discover?

The black and brown models were attacked more than the scientists expected since the black and brown models are difficult to see against a jungle background. On the other hand, scientists expected the brightly colored models would be frequently attacked. In fact, they found the yellow and red models were not attacked as much as expected.  These results demonstrated that bright coloration does decrease the risk of being attacked. They also found that the models that were natural to the environment were attacked less by birds than the novel models that were not natural to the jungle.

Which frog would you be if you wanted to keep from being eaten?

Let’s return to imagining life as a frog. Which color would protect our frog selves from predators? From these experiments, we know two things. 1) Bright colors are important. 2) Bright colors that are the same as other poisonous animals are also important. So we should use either red or yellow because they are bright against a jungle background and we should all be the same color so that predators can learn and remember to not attack us. In the end, what color turns out to be the best for not being eaten? Red is the best color for our frog. At least the best color if we want to avoid being eaten in the jungle.

Brett Seymoure. (2013, November 25). Is It Easy Being Green? . ASU - Ask A Biologist. Retrieved January 27, 2023 from https://askabiologist.asu.edu/plosable/poison-dart-frogs

Brett Seymoure. "Is It Easy Being Green? ". ASU - Ask A Biologist. 25 November, 2013. https://askabiologist.asu.edu/plosable/poison-dart-frogs 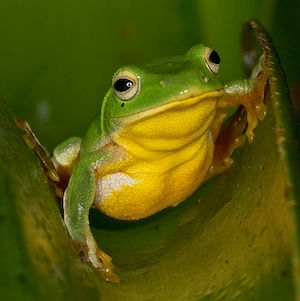 For frogs, color matters if you want to survive in the rainforest.
Inferring Predator Behavior from Attack Rates on Prey-Replicas That Differ in Conspicuousness
Learn how to read a scientific article