Proof Is in the Poop

Biomarker: a chemical or other substance that is collected from an organism to give information about its condition, such as general health or presence of disease.

Fecal biomarker: a chemical produced in the digestive organs of the body that can be found in fecal matter.

Fecal matter: digested materials that are excreted from the body, more commonly known as poop.

Neanderthal: an extinct species of early human known for heavy brows and a stocky build....more

Sterol and stanol: certain types of naturally occurring substances, such as cholesterol, that are found in plants, animals, and fungi. 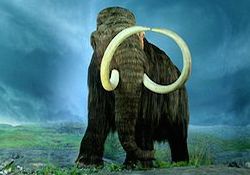 Neanderthals would hunt giant mammoths and use their meat as a source of food. Image by Tracy O.

A Neanderthal walks slowly, scanning the ground for tracks. He looks for anything that might lead to the mammoth he has been hunting. He finds a couple of tracks and quickens his pace. Suddenly, he also starts to see the tracks of a sabre-toothed cat, which make him decide that the area ahead is too dangerous to go through. So what will he eat for dinner? He doesn’t want to starve, so he must look for another source of food. 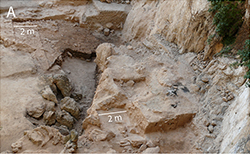 Many people believe that Neanderthals were simply hunters. When you think of them, you normally see a caveman, with a huge brow and forehead, wearing animal hides. They are hunting down wooly mammoths or other creatures to cook over a fire. But did our cavemen cousins also eat vegetables?

In this experiment, scientists collected samples at El Salt, in Spain. This dig site is about 50,000 years old and is home to the oldest known Neanderthal fecal matter. Scientists dug up several samples of fecal matter, but also collected the soil around the samples. They wanted to make sure they gathered as much information about the fossilized fecal matter as they could. After they collected the samples, the scientists returned to the lab to analyze them.

Back at the laboratory, the scientists wanted to identify what was in the samples that they had collected. To do this, they used a laboratory technique called Gas Chromatography-Mass Spectrometry (GC-MS). This technique is used to identify the different chemicals in a sample.

In order to prepare the samples, scientists took some of the fecal matter samples and crushed them up into a fine powder. They then soaked the powder in several different chemicals. Finally, they exposed the powder to high temperatures. This process helps to separate the different chemicals in a sample to figure out what it’s made of. In this experiment, scientists used this process to identify biomarkers in the fecal matter.

Scientists found biomarkers in the fecal matter suggesting that both meat and plants were part of a Neanderthal's Diet. Click for more detail.

What Does It All Mean?

It’s a great discovery to know that Neanderthals ate plants, but why does it matter? Well, many scientists believed that Neanderthals did not survive as well because they only ate meat. If there were fewer animals around, it would be more difficult to find food to eat and survive. 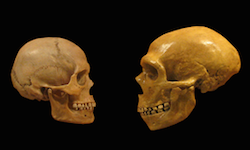 Learning more about Neanderthals helps scientists to understand how modern humans have evolved over time. Image by Hairymuseummatt.

If Neanderthals ate both meat and plants, then there would be more food sources available. They would be more likely to survive because they could eat plants if they were unable to hunt for food. Because Neanderthals also ate plants, scientists believe that a lack of food options was not a reason that they went extinct.

Han Duerstock. (2015, February 16). Proof Is in the Poop. ASU - Ask A Biologist. Retrieved January 28, 2023 from https://askabiologist.asu.edu/plosable/proof-poop-what-neanderthals-ate

Han Duerstock. "Proof Is in the Poop". ASU - Ask A Biologist. 16 February, 2015. https://askabiologist.asu.edu/plosable/proof-poop-what-neanderthals-ate 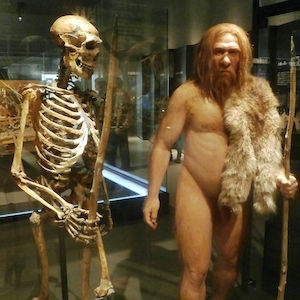 Scientists believe that this what a Neanderthal male looked like.
The Neanderthal Meal: A New Perspective Using Faecal Biomarkers
Learn how to read a scientific article