Cretaceous Period: the geologic time period that lasted from 145 million years ago to 66 million years ago, and that ended with the asteroid strike that is believed to have caused extinction of the dinosaurs....more

Fossil record: all of the fossils that have been discovered and recorded by humans so far.

Function: a purpose or use for an object or living thing.

Niche: the place an organism fits into its community, in terms of what its function is or what role it plays. For example, oak trees are important providers to a community, as they produce oxygen, food, and create shade for other organisms.

Today, we photograph, film and document everything. We have mountains of photos, videos and social media posts that chronicle our entire lives: Family vacations, sibling pranks, our big accomplishments, and even our lunches. But, how do we know what was going on a long time ago, before cameras? How about 70 million years ago? 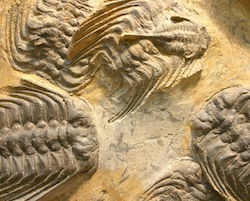 Scientists study the fossil record to learn what species lived on Earth during certain periods, and what the lives of those organisms might have been like. Click for more detail.

To look back that far, scientists study the fossil record. The fossil record can tell us a lot, including what species lived on earth, when those species lived on Earth, where they lived, what they ate, and even how they died. In the PLOS Biology article, “Late Maastrichtian pterosaurs from North Africa and mass extinction of Pterosauria at the Cretacious-Paleogene boundary,” scientists look at newly found pterosaur fossils. These new fossils change what scientists thought they knew about how pterosaurs were doing before an asteroid wiped out most life on Earth.

Are Pterosaurs Birds, Reptiles, or Dinosaurs?

Pterosaurs were reptiles. You can think of them as cousins to dinosaurs. They were the largest animals to ever fly on Earth, and they flew all around the planet. 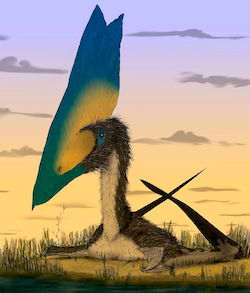 Scientists have found hundreds of fossils of different types of pterosaurs. Some were as small as paper airplanes, and weighed almost the same as a stick of butter. The largest weighed more than 400 pounds and had a wingspan of 35 feet. That’s the same as the height of a three-story building or the size of a small airplane.

The fossil record tells us pterosaurs existed on Earth for about 150 million years. They went extinct when an asteroid hit Earth 66 million years ago, killing nearly all plants and animals on Earth.

The asteroid was likely more than seven miles wide. It struck near the Yucatan Peninsula in Mexico. The crash sent dirt and soot into the Earth’s atmosphere. The soot blocked sunlight and cooled temperatures by almost 30 degrees in some areas. 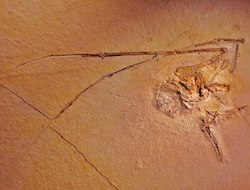 Pterosaur bones were hollow and fragile, making it difficult for many to be properly fossilized. Click for more detail.

Even though pterosaurs flew all around the world, their fossils are hard to find. Pterosaur bones were hollow and fragile. When pterosaurs died, their bones would often break apart too fast to become fossilized.

For a long time, scientists thought that pterosaurs were going extinct before the asteroid hit Earth. The fossil record seemed to show that species were declining all over the world. But new fossils found in North Africa tell a different story.

Miners in Morocco found some fossils, and called in scientists to search for more. In total, more than 200 fossils were collected, cleaned, identified and organized by species and age.

Scientists can identify a species by taking careful measurements of bones. They try to match those measurements with other fossils that have been found. If there is no match, it’s a new species. As an example, let’s look at a few of the new pterosaur fossils that scientists found: an ulnae, a humerus, and a femur.

An ulna bone is part of a pterosaur’s wing, and is similar to a bone in a human’s forearm (between your wrist and your elbow). Ulnas helped pterosaurs fly and walk. One of the pterosaur ulnae found in North Africa was similar in shape to another found in the past. But small differences between the long part of the bone (the shaft) and one end helped researchers learn it was from a new species. 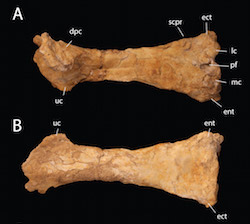 Different views of the humerus, showing abbreviations for the bone features the scientists studied. Click for more detail.

The researchers also studied a humerus bone found at the North Africa site. The humerus connected a pterosaur’s wing to its shoulder. Studying the size and shape of the humerus helped researchers learn the size of one of the pterosaurs. It had a 15 foot wingspan, which is almost as wide as an adult giraffe is tall. Differences in the size and shape of the bone shaft, as well as the shape and curve of other parts of the bone showed it was from an unknown species.

A pterosaur’s femur is similar to a human’s thigh bone, and would help with climbing. The femur from the site matched the size and shape of pterosaur femurs found in the past.

Comparing these fossils to those found before helped scientists learn that they came from pterosaurs, and that some were from new species.  The three bones described above were from a new species, which the researchers named. Its scientific name, Tethydraco regalis, can be roughly translated to mean “royal sea dragon.”

From this and other fossils, scientists were able to figure out that pterosaurs were much more diverse than we thought, right before they went extinct. 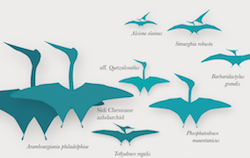 By comparing size and shape of the wide variety of pterosaur species, scientists can get a better idea of how many species there may have been. Click for more detail.

How can scientists figure this out from a few fossils? One way is to use fossils to measure how different the lives of these animals might have been. This can be done by using information on body shape (like size, leg length, or beak shape) to understand that animal’s ecology. From body shape you can figure out what it might have eaten, how it would have moved, and in what habitat type it might have lived. These are called “functional correlates.” You can correlate a bone shape (or other characteristic) to how an animal functioned.

Let’s look at an example. Birds use their beaks to catch, pierce, pick up, or tear their food. You can tell a lot about bird diet from beak shape. Some birds have long, thin beaks that let them eat flower nectar. Short, curved beaks are good for seed eating, with larger beaks for larger seeds. Large raptors, or birds of prey, have sharp, strong beaks that help them tear flesh apart. From just a few birds, we can tell from their beaks that they have a wide range of diets and niches (ecological roles).

Pterosaurs also have lots of beak shapes and sizes, though they do not look like bird beaks. This variety shows that pterosaurs likely had many diets and niches as well. The researchers also used other information from the pterosaur bones. Size affects what and how much animals eat, and arm and leg lengths tell us if they walked on the ground or not (relatively short legs aren’t good for walking). Where the bones were found shows the environments they lived in. 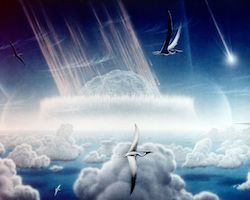 Data show that right before an asteroid killed most of the plant and animal life on Earth, pterosaurs were likely more diverse and successful than we thought. Artist illustration of the impact by Donald E. Davis.

Using these data, researchers used functional correlates to make a character matrix. Imagine this matrix as a cube, where characters of fossils are written down and compared to other species and roles over time. From this, researchers can learn how many roles within an ecosystem were filled or if more than one species was in a specific role. They can also learn if species that lived at the same time and in the same area were very different. All of this helped them estimate the diversity of pterosaur species alive across time.

From these data, researchers suspect that pterosaurs were doing well up until the asteroid hit Earth. The fossils found in Morocco show that several more species of pterosaur were alive during that time than scientists thought.

Knowing how rare pterosaur fossils are, it’s likely that even more species were alive at the time. But we have to wait for future fossil discoveries to figure out the rest of the pterosaur story. 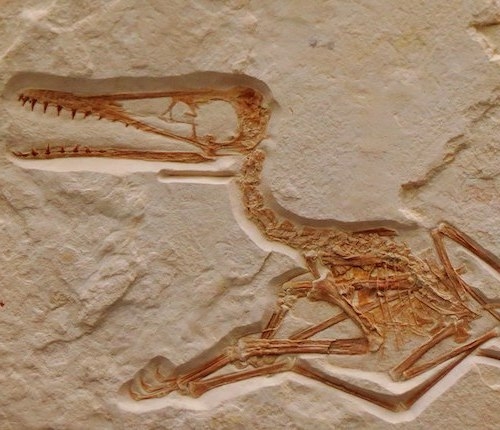 New pterosaur fossils are telling a different story about the success of pterosaurs right before they went extinct.