The Push for Perfection in Breast Cancer Screening

Biopsy: examining a sample of tissue or fluid to look for any abnormalities ... more

False Positive: when something, such as a condition or disease, is found to be present but is actually not present... more

Mammogram: a x-ray exam of the breast tissue that can be used to screen for breast cancer. X-ray exams are used to detect many other diseases too. 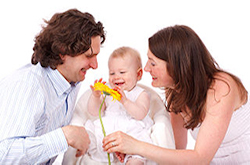 Risk for certain diseases can be passed down from parent to child. Image by Vera Kratochvil.

All people share a special ability to pass on traits to their offspring. You have probably been told that you look just like your parents. This is because many of their traits have been passed down to you. This is true for traits like eye color, hair color, and height. But it’s also true for the likelihood of getting certain diseases. One such disease, breast cancer, can be passed between generations in the same way as these other traits. This dangerous disease affects many people, especially women, across the world everyday.

What Is Breast Cancer and How Do We Find It? 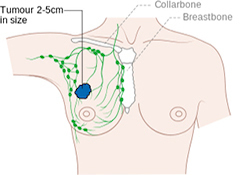 Breast cancer is a disease that affects breast tissue, which is located over the breastbone. This disease typically affects women, but men are also at risk. As women get older, their chances of developing breast cancer increase. Because of this, doctors recommend that women who are 50 and over get a mammogram every two years. A mammogram is one type of screening method. Here, doctors x-ray (like when you break your arm) the breast tissue. This lets them see any areas of tissue that could lead to breast cancer.

If the doctor sees a spot that looks like it could be cancer, they often recommend that the individual get a more detailed x-ray. If this second x-ray shows the same suspicious spot, the doctor will recommend further testing in order to decide on treatment. Further testing often includes a biopsy. Here a doctor will take a sample of the suspicious tissue or fluid to test to see if it contains cancer cells.

Current screening methods can detect cancer but they can also make mistakes. Sometimes, a mammogram will detect a spot that looks dangerous, but a second x-ray will show that the spot is not actually there. This is known as a false positive.

A mammogram is an x-ray that helps doctors to check to see if a woman has breast cancer. Image by Dr. Dwight Kaufner.

Scientists are researching ways to make this screening more successful. A mistake that can occur is when the doctor sees an area of concern and diagnoses the woman with breast cancer. She, like all of us, would be very scared. After further screening, the doctor discovers that it was a false positive. While the discovery that the patient doesn't have the disease is a relief, this false diagnosis can cause a lot stress for the patient.

In this study, scientists and doctors wanted to test a new screening process that could help to reduce the number of “false positive” diagnoses. By developing more accurate ways of predicting the disease, scientists hoped to eliminate unnecessary stress for the patient.

Scientists and doctors are moving toward risk-based treatment. This form of treatment uses information like family history and breast density to find out how much a woman is at risk for developing breast cancer. They can then use this information to treat each woman based on her individual risk for breast cancer.

For example, if a patient’s mother, aunt, and grandmother all had breast cancer, then the patient is much more likely to get the disease. This is because the risk for getting the disease is passed down to a person’s offspring.

Another piece of information that can be useful to doctors is the density of a woman’s breast tissue. A woman who has very dense breast tissue is more likely to develop breast cancer than a woman who has tissue that is less dense. Scientists haven’t quite figured out why this is, but they believe that it has to do with the amount of fatty tissue. The denser the breast tissue, the less fat it has.

And the Winner Is…

If a doctor knows a patient’s family history and her breast density, they can recommend either more or less screening. For example, if a woman has breast cancer in her family and high-density breast tissue, the doctor may recommend that she is screened more often than someone without a family history of the cancer. This increases her chances of discovering the disease early if she does have it at some point in her life. 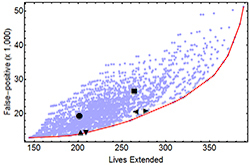 Scientists looked at data from the medical records of 2,625 woman who had been treated using either the normal screening strategy or a risk-based one. Women were divided up into four groups: Low risk, moderate-low risk, moderate-high risk, and high-risk groups. They then recommended specific screening for each group and observed diagnosis cases and survival rates. Overall, women in the risk-based treatment groups had lower occurrences of false positives than those in the normal screening method.

Scientists found that tailoring treatment for women based on their risk levels led to less false positives and fewer unnecessary costs for the patient.

Let’s Look at the Big Picture

If the doctors have information on a patient about her or his likelihood for breast cancer, they can recommend screening and treatment options that are tailored for each individual person. Scientists believe that this is likely to reduce the number of false positives and give doctors a better chance of discovering the disease early enough to get rid of it. 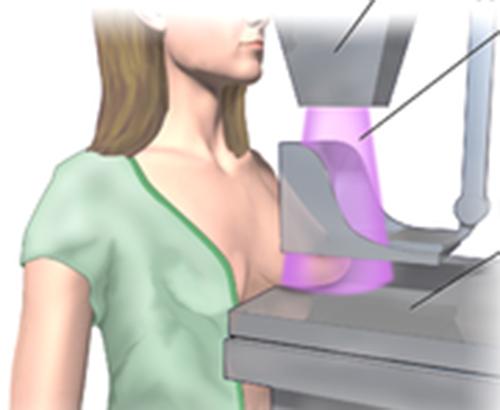 A mammogram is used as a tool to screen women for breast cancer.