Census: A way of gathering and recording data about the members of a population. This may include data like age, location, and identity...more

Decade: a period of ten years.

Ecosystem regeneration: When humans help an ecosystem to recover after stress. This stress could be environmental or caused by humans...more

When was the last time someone measured your height? Was it at the doctor’s office? Maybe standing tall against the wall in your kitchen while someone marked your height on the wall with a pencil? Kids’ heights are measured regularly to make sure they are healthy and growing with age. Size is a pretty good indicator of age and health in other species, too. Most plants grow throughout their lives. Because of this, measuring the height of some plants can be a good way to estimate their ages. 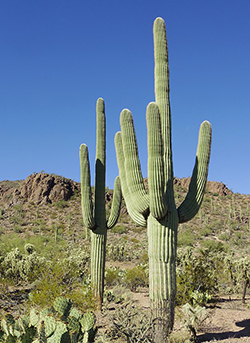 The Saguaro cactus is the largest cactus in the United States, where it only grows in Arizona and eastern California. The white bloom of the Saguaro is Arizona’s state flower. Image by WClarke via Wikimedia Commons.

The saguaro cactus can live up to around 250 years – much longer than you or I can. Over the last 80 years, scientists have been measuring one population of Saguaros in southern Arizona every year. In the PLOS ONE article “Saguaro (Carnegiea gigantea) Mortality and Population Regeneration in the Cactus Forest of Saguaro National Park: Seventy-Five Years and Counting”, scientists used population data to understand how humans and environmental changes affect saguaros. Scientists can use this information to protect these plants and make sure they stick around.

A Natural Forest of Saguaros

Saguaro National Park, located near Tucson, Arizona, is protected by the U.S. government due to the special cacti that call this park home. Some of the land in the park is divided into plots dedicated to research on plants and animals. Each study plot covers 10 acres of land. These scientists focused on just six of those study plots. The saguaros in each of these six plots have been carefully monitored since 1942 with a census every year.

During the annual censuses, scientists visited each known saguaro in the plots. First, the cactus was identified based on its location, height, and any unique scars or marks on the plant. Next, researchers gave each saguaro a “check-up”. They recorded the current height of the cactus and its number of branches. Based on its height, researchers assigned each saguaro into a height class. These classes divided the population into five approximate age groups: the Class 1 cacti are considered the youngest, and the Class 5 cacti are probably the oldest members of a population. 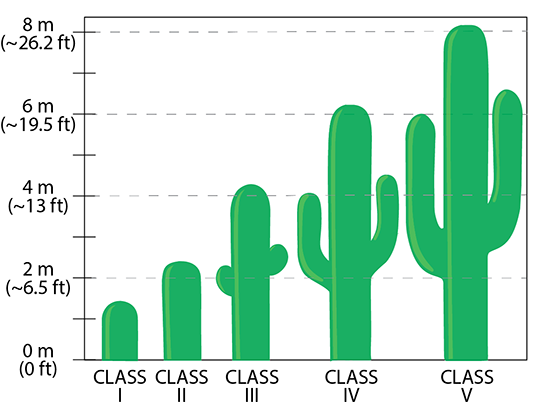 This graph shows how cacti were grouped into height classes. The dotted lines at 2, 4, 6, and 8 meters show class divisions. As a cactus grows, it graduates from one class to the next. Height is a good predicter of age in saguaros, so cacti in higher classes are probably older plants. The median age of plants in the five classes in 2015 was 34 (class I), 41 (II), 51 (III), 73 (IV), and >85 (class V) years old.

Although these giants grow very tall, they grow very slowly. It can take years for a saguaro seedling to reach just one inch tall! Every spring, researchers found, counted, and mapped new saguaro seedlings. Scientists estimated the year that each seedling sprouted based on its height at discovery. It is important to know that cacti grow faster in wetter years and slower in drier years. So, scientists took recent rain levels into account when estimating age. 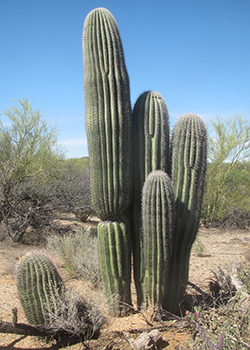 Estimating the age of a cactus based on height alone can be a bit tricky. These four saguaros were discovered in 1986 and estimated to be 4-7 years old at the time. Now all their heights are varied, although they have been growing in the exact same conditions their whole lives. While height can help scientists estimate a saguaro's age, it is not a fool-proof method.

This saguaro population has been shaped by new seedlings being planted and weaker plants dying. Old saguaros and very young seedlings are the weakest in the population. They are more likely to die from exposure to harsh conditions like frost or drought.  At the start of this study in 1942, there were 1,437 saguaros on the plots. In 2016, there were about half as many saguaros (just 611). The biggest population decrease was seen in the oldest and largest cacti. These cacti probably died from stressful environmental events that younger plants survived.

At the beginning of this study, scientists noticed there were very few young cacti in the population. So, from 1959 to 1993, scientists planted 828 new seedlings across the plots. There were few other plants around at the time from woodcutting and cattle grazing. Scientists thought this might be keeping the seedlings from surviving.

To help them grow, they intentionally planted their seedlings under nurse plants. During the first few years of life, heat, drought, grazing, freezing, and wind all threaten seeds and seedlings. A nurse plant helps protect the plants growing beneath it from the sun and grazing animals. 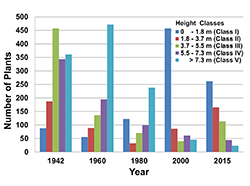 This graph tells the story of the saguaro population in Saguaro National Park from 1942 to 2015. Click for more detail.

The seedlings that scientists planted under nurse plants increased the number of Class 1 cacti in the population between 1960 and 2000. The number of Class 2 cacti began increasing in 2000, as some of these seedlings reached maturity. A saguaro is usually about 40 years old when it graduates to Class 2 and is big enough to reproduce.

If more of these planted saguaros grow into healthy adults, more ecosystem regeneration may not be needed. Until then, scientists will monitor this saguaro population. Annual census data and the use of nurse plants helped the saguaro population bounce back from stress. This has helped scientists understand how they can work to successfully conserve the species.

This story on Ask A Biologist was funded by NSF award 1735604 as a part of Martin Wojciechowski's research. 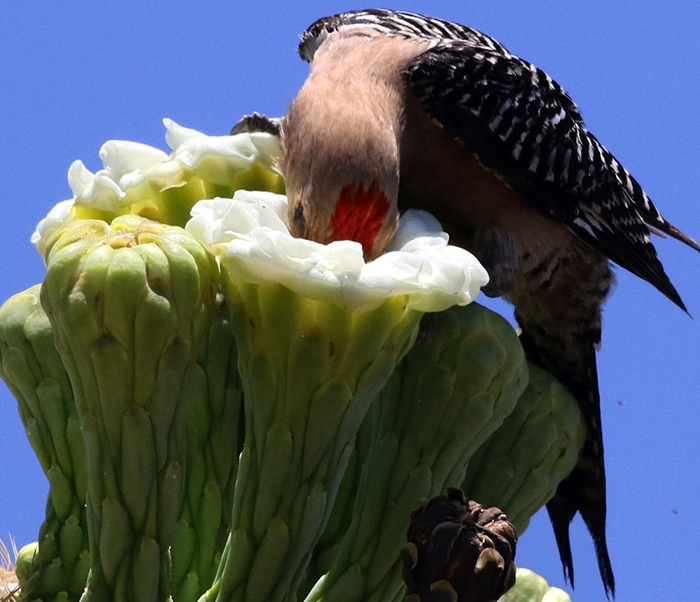 Saguaros are an important part of the Sonoran Desert ecosystem. They provide food and housing for a variety of animals, including this Gila woodpecker.

Learn more about the Plants of the Desert.

Saguaro (Carnegiea gigantea) Mortality and Population Regeneration in the Cactus Forest of Saguaro National Park: Seventy-Five Years and Counting
Learn how to read a scientific article