Deforestation: clearing trees from a forest for wood or so the land can be used for something else.

Forest fragmentation: when one large forest is split into many smaller forests due to the cutting down of trees. The small forests are often separated by things like roads and farmland.

Seed dispersal: the movement of seeds away from a parent plant so new plants can grow in new places.

It’s a warm summer day at the park. While you are playing, you find a fluff-topped dandelion. You pluck it, make a wish, and try to blow the seedy white top off with a single breath. Although you may not realize it, in that moment you became a seed disperser. 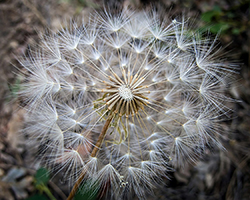 Close-up of the seedy white top of a dandelion. Each dandelion contains several seeds. The wind can carry these seeds far away. Image by Aislinn Wildrose.

Plants cannot move very far on their own. Many rely on seed dispersers to move their seeds for them. This is how some plants manage to grow in a wide variety of places. Seed dispersal is why you can probably find dandelions at school and at the park.

Seed dispersal is also important for the growth of forests. If seeds can move throughout the forest, new plants will be able to grow in new places. Some seeds are carried through the air, like dandelion seeds. Heavier seeds rely on animals to move them. Animals can disperse seeds in many ways. Seeds can get trapped in their fur and the animal can carry them away. Some animals eat fruits that contain seeds. If this happens, seeds are dispersed when the animal poops.

In the PLOS ONE article “Quantity and quality of seed dispersal by a large arboreal frugivore in small and large Atlantic forest fragments”, scientists collected poop to measure how well brown howler monkeys disperse seeds.

You look up. Trees and other plants tower above you. Nearby, you hear hidden animals move through the forest. Perhaps they are searching for food. You close your eyes and take a deep breath. The air smells fresh and feels good in your lungs. That air wouldn’t be the same without plants. 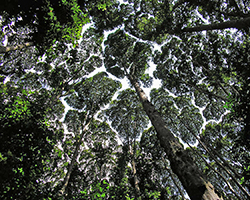 To stay healthy, forests need a variety of plants and trees. Image looking up into a forest canopy by Mikenorton.

Plants are important because they make fresh air. They also provide a lot of animals with food and shelter. In fact, a large variety of plants usually means that a forest is healthy. For this reason, it is important that forests have many types of plants.

One group of plants you might find in a healthy forest are woody plants, such as trees and shrubs. Many woody plants produce fruits. Fruits are usually heavy, so they are not easily moved by wind. Instead, animals can disperse the seeds of woody plants. In tropical forests, there are a lot of woody plants that make fruits. Many primates in these forests eat the fruits to survive.

Because primates eat a lot of fruit, they disperse a lot of seeds in their habitats. But deforestation can lead to fewer fruits in the forest. Deforestation is when large areas of trees are cut down. 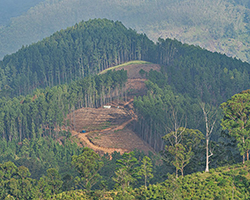 Here, people are cutting down trees in the middle of the forest, creating large areas of empty land. Click for more detail.

People cut trees down for things like mining minerals, making paper, and creating space for cattle to graze. Fewer trees mean animals have fewer types of fruits to eat. That could mean fewer seeds are dispersed. So, fewer types of plants will grow in the future. But seed dispersers could help forests regrow.

Howler monkeys are the loudest land animal in the world. You can hear their calls from over 2.5 miles (or 4 kilometers) away. The diet of a howler includes leaves and fruits. In the Atlantic Forest, brown howler monkeys disperse seeds from over 90% of the fruits they eat. Howler monkeys are also very good at adapting to changes in the forest. That is why in some deforested areas in the southern Atlantic Forest, they are the only species of monkey. Scientists wanted to know how well brown howlers disperse seeds in this fragmented forest.

Brown howler monkeys live in social groups. These groups are usually made of six to 10 monkeys. Each group has their own territory in a forest. For this study, the scientists used binoculars to watch six groups of howler monkeys for four years. Three of these groups lived in small fragments of the Atlantic Forest. The other three groups lived in large forest fragments. 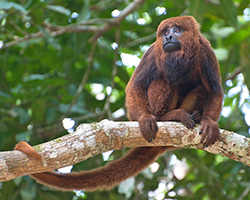 A brown howler monkey sitting in a tree. This species of howler monkey is only found in the Atlantic Forest. Image by Peter Schoen.

Every two weeks the scientists watched a different group of monkeys. From morning to the evening, they recorded what plants the monkeys ate. They also recorded what the monkeys did with the seeds from fruit. They wanted to know if monkeys chewed the seeds, swallowed them, spit them out, or threw them from the trees.

Scientists also picked up all the poop that came from the monkeys. They stored the poop in plastic baggies. The scientists later searched through the poop to find seeds. Next, they identified what plants the seeds came from. While counting the seeds, they also recorded how damaged they were. This would help them decide if the seed could eventually grow into a plant.

How Many Seeds Does a Primate Poop?

In total, the scientists collected 1,373 poop samples and found 315,600 seeds. These seeds were from 98 different types of plants. The scientists found 30 – 53 types of seeds among all three monkey groups in smaller forest fragments. In the three groups in larger fragments, they found 39 to 43 types of seeds. On average, each monkey would poop about 143 seeds per day. That means each monkey could disperse up to 52,052 seeds per year.

But deforestation could mean that brown howlers have fewer fruits to eat. Does that mean they dispersed fewer seeds in small fragments? It turns out that the numbers of seeds found in the large and small forest fragments were similar in most cases. But there was one big difference. 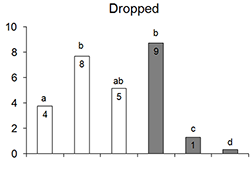 How did the brown howler monkeys handle the seeds from fruits they ate? Click for the full set of graphs and for more detail.

In the small fragments, howlers actually dispersed more seeds from plants that are usually not a part of their diets. Because smaller fragments had fewer plants, the howlers changed their behavior. They started to eat plants they would not normally eat in a large forest.

Overall, the scientists found that most of the trees that depend on animals for seed dispersal were spread by howler monkeys. Howler monkeys also travel throughout the day, so they spread these seeds throughout the forest. Because howlers disperse a lot of seeds, their poop can help forests grow. 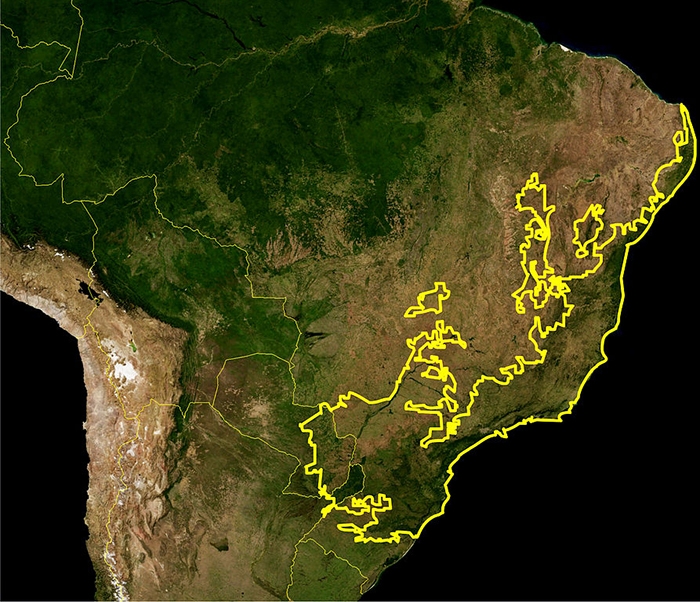 The Atlantic Forest is a South American forest that is undergoing a lot of forest fragmentation. You can see it here outlined in yellow. When forests become fragmented, what does that do to the food supply and behaviors of the animals that live there?
Quantity and quality of seed dispersal by a large arboreal frugivore in small and large Atlantic forest fragments
Learn how to read a scientific article