Microglia: cells which try to help maintain constant and healthy conditions in the nervous system. They do this by responding to chemical changes within the brain. Microglia act as part of the immune system and deal with damage and infection of the brain.

Traumatic brain injury: damage caused by the brain forcefully coming into contact with the inside of the skull....more

Treasures that are precious or important need to be kept safe. To protect them, you might lock them up in a cabinet, or even in a chest buried underground. But what do you do if you need to use something precious every day? Say, something like… your brain? Your brain is delicate and very important. It is responsible for everything you think, feel, or do. So how does your body protect it from injury and disease? 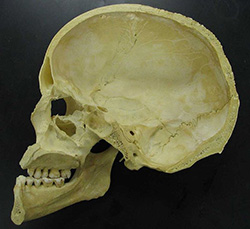 Skulls are good at protecting our brains from damage, but sometimes they are not enough.

Your brain is protected from a lot of physical damage by your skull, but sometimes that is not enough. Sometimes bacteria or viruses may try to invade. In those cases, your brain needs another form of protection: the immune system. The brain has specialized immune cells called microglia. Microglia are always on the lookout for threats that could cause damage. When they find them, they can eat them through a process called phagocytosis. In this way, microglia clean up damaged parts of brain cells, bacteria, and viruses, to keep the brain clean and healthy.

But sometimes, if a brain is injured, these protective cells are affected. In the PLOS ONE article “Rod Microglia: A Morphological Definition”, scientists look at brain cells after a traumatic brain injury. After injury, microglia line up and take on a curious train-like formation. But how, exactly, does this happen? 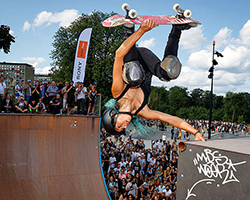 Skateboarding is a sport where you can get injured easily, so always make sure to wear a helmet. Click for more detail.

Skateboarders take a lot of risks. They move fast along dangerous roads, or sometimes do tricks—and all over solid, hard pavement. They really should wear helmets. But what happens if a skateboarder takes a tumble and bangs their head while they aren’t wearing a helmet? This kind of accident can cause a traumatic brain injury.

During brain injuries, special cells called microglia are called to the scene of the injury. Microglia act like tiny cleaners, removing damaged cells or mopping up substances associated with a brain injury. But to do this, the cell needs to change shape. How this happens is not well understood. 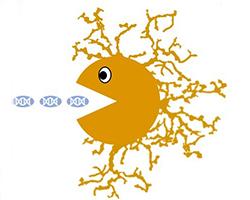 Much like Pacman, a microglial cell chases and eats damaged cells and particles. Microglia have a cell body, from which there are lots of branches that help the cell to move around the brain and sense damaging signals. Original figure by Tabitha Green.

In the healthy brain, microglia have many branches attached to a central point called the cell body. These branches enable microglia to patrol their territory and sense danger signals from other cells. When they sense that the brain is under attack, they shrink their branches and pull them into their cell body, becoming a big, blobby cell. The shortened branches give them the power to engulf and digest unwanted substances. They use this function as part of their role in the immune system. More recently, scientists have discovered other functions for microglia, like helping communications travel between cells in the brain.

Becoming big and blobby is how microglia activate their defense skills. Activation allows them to protect the brain, and behave like the Pacman videogame character — special chemical signals drive them to move around the brain and gobble up dead cells and damaging particles. But this “blob” form isn’t the only odd shape microglia can change into. 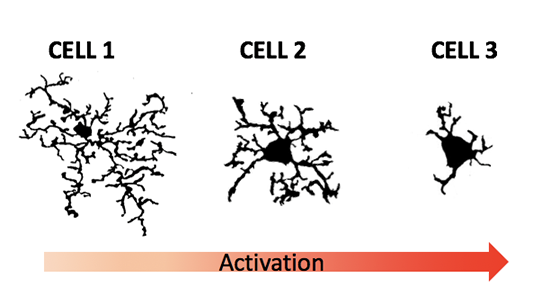 The shape of microglia change based on conditions. Cell 1 shows how microglia look when they are in the healthy brain (a small cell body and lots of branches). This shape allows them to survey the brain looking for potentially damaging cells or particles. Cell 2 shows a microglial cell that has sensed danger in the brain. Cell 3 shows an activated microglia with shortened branches and a big cell body, ready to digest damaging particles. Original figure by Tabitha Green.

In 1899, a scientist called Nissl examined the brains of patients with a disease called ‘syphilitic paralysis’. He noticed that in sick patients, microglia shapeshifted from their rounded shape (seen in the healthy brain) to form long thin cells which looked very different from the short, fat activated microglia. This type of microglia is called a rod microglial cell – because of its rod-like shape.

How do rod microglia form?

In the past, it was thought that rod microglia were formed through lengthening of the cell body. However, scientists have come up with a new idea about how they are formed. They noticed that the cells retract their side branches during activation. They thought this might help the cell change shape, but they had to examine lots of microglia to figure out if this was true.

The scientists studied microglia by collecting thin sections of brain tissue from rats that have had a brain injury, as well as from healthy rats. Special processes which involve proteins and chemicals that stick to microglia are used to turn the microglia in the tissue brown. That way, they can see the microglia in the brain amongst all the other cells. Scientists used this method to examine microglia under the microscope, looking at their shape and size.

But what are rod microglia doing?

When looking at the microglia, scientists found that brain injury caused the cells to change into the rod cell type. This can happen as soon as 1 day after a brain injury! This means that these cells respond quickly to damage. When they do respond, the side branches retract, which helps make the cell body appear longer. 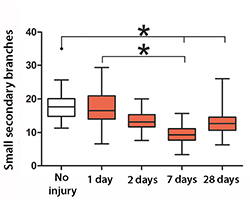 A graph showing changes over time in the number of small branches connected to main branches on the cell after a brain injury. Click for more detail.

The scientists also found that over time the cells grew back their branches. Although by 28 days the rod microglia started to regrow their branches, they had not completely recovered. This shows that rod microglia are still working hard to help the brain recover from an injury for longer than 28 days! This fast transformation into the rod shape after injury suggests that rod microglia are still undergoing activation and are clearing damaging substances from the brain, even though they look very different.

The results from this study have raised many new questions such as; how and why do microglia shrink their branches? Are rod cells just activated microglia that look different? What signals are telling the microglia to form rods? Scientists are continuing to look for the answers to these important questions. They hope that one day doctors will be able to use their understanding of microglia to help patients (like the injured skateboarder) recover from brain injury. 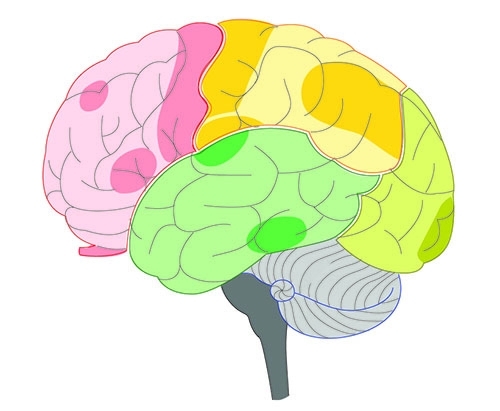 Rod Microglia: A Morphological Definition
Learn how to read a scientific article