Speed of the Human Brain

Rodent: a small mammal, such as a mouse, rat, or squirrel, that is known for having a pair of teeth in its upper and lower jaws.

Synaptic Depression: A time after a neuron has fired repeatedly when it is temporarily unable to communicate with other neurons.

Task: a job or duty to complete.

You shouldn’t take the cells in your brain for granted. They exist in a swirl of electrical and chemical messages, with information racing this way and that. In all creatures with a brain, brian cells work together to control their bodies and to make them behave in unique ways. But not all animals are able to complete the same challenges. So what are the differences between the brains of, say, a mouse and a human, that make them better or worse at certain tasks? 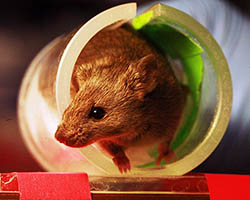 Mice are especially good at finding food in mazes because they can use their sense of smell. Image by Rama.

Well, we know they are very different in size and each has special abilities. For example, mice are very good at moving through mazes to find food because of their great sense of smell. Humans can’t use their noses as well but are able to find their way around by using maps or electronics.

Many scientists wondered what was the cause of these differences. For a while, some thought brain size was responsible. But it turns out this may not be the only reason. In the PLOS Biology article, “High Bandwidth Synaptic Communication and Frequency Tracking in Human Neocortex,” biologists studied whether brain cells in humans communicate in a more efficient way than those in rodents.

A Network of Neurons

The brains of humans and other animals are made up mostly of cells called neurons. Neurons are special cells that carry signals to process information for our bodies. Neurons send and receive this information through branches on the main body of the cell, called dendrites. The dendrites then send messages down another part of the neuron, the axon.

Axons and dendrites connect neurons so they can talk to each other. These connections form a large network within the brain and help the different parts talk to one other. This is very important for every day functioning, for example, to understand the things we see or to let us know that we are hungry. 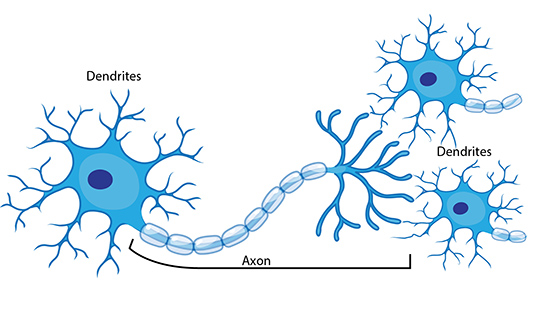 Axons from one neuron can send messages to the dendrites of other neurons. Click for more detail.

The way neurons talk to one other is like a game of telephone. You think of a message, and then whisper it in your friend’s ear. Based on what your friend hears, she or he will tell the next person exactly what was said. You and your friends can be thought of as neurons and the messages you tell each other are electrical or chemical signals being passed from neuron to neuron.

The space between your mouth and your friend’s ear in this game is also very important for sending the message. If it's very noisy it might be more difficult to share your message. In the same way, the space between neurons might be just as important in helping neurons to send information. 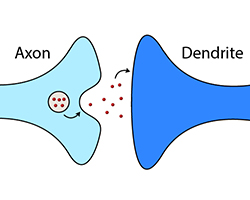 Chemical messages have to cross a space (the synapse) to move from the axon of one neuron to the dendrite of the next neuron. Illustration modified from Ring0.

The meeting place between two neurons is called the synapse. Neurons use the synapse to pass on messages and share information with other neurons. Once a signal is received from across the synapse it will carry this signal to the next neuron. This process happens all throughout the brain and the rest of the body.

Recently, scientists learned that synapses can become depressed, meaning that their abilities are reduced. After two neurons send signals to one another, they cannot send another signal for a short time. Any signal traveling through the synapse during this time will not be passed on to the next cell. Scientists wondered if the depression time was different for the human and mouse brains. If so, then it might explain what makes humans able to process more information and do more complex things.

Researchers used slices of brain from both humans and mice to test their idea. Pairs of neurons in these brain slices were tested to see how fast information could move between them. The scientists would force the neurons to send signals by using electrical current. The current would activate the neurons in a way similar to the brain. Using some complex equations and previous work, scientists were able to study depression time in the human synapse and compare it to timing in the mouse.

Scientists found that depression time was much shorter in human neurons compared to mice neurons. Shorter depressions allow neurons to start firing again sooner. Because of this, human neurons can send more messages in the same amount of time. Mice neurons can take up to ten times longer to recover and send another message. 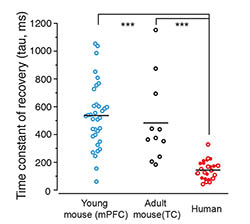 This graph shows the recovery time of synapses in mice and humans. Click for more detail.

The fast recovery of synapses in the human brain allows cells to perform basic functions more quickly than those in the mouse brain.

Let’s say one neuron is receiving messages from many others. If the synapses between this neuron and others had a long depression time, a change in the information being passed along would not be able to cross the synapse for a longer period of time.

Basically, the neurons stop wanting to play telephone with each other and so no new information can be passed along. However, human neurons tend to be more excited about this game, and do not easily grow tired of playing it. Scientists believe that this may explain why humans are able to do complex things that other animals may not be able to do, like use a map to navigate through a city.

There is no denying that the human brain is highly complex. Scientists now know that both brain size and the ability of neurons to communicate with each other are important pieces in the puzzle of how humans perform complex tasks quickly. Scientists will have to continue their work to see if there is more to the story. 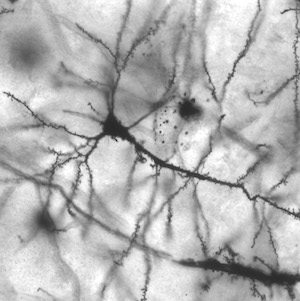 Scientists have found that human and mouse neurons have unique qualities that give them each unique abilities.

Want to learn more about the brain? Visit one of our other stories, A Nervous Journey.