Spicy is Tasty to Tree Shrews

Capsaicin: the ingredient in chili peppers that makes them spicy.

Nociceptor: a neuron that senses pain. 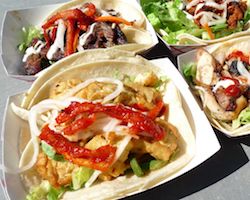 Some people love spicy foods, but others avoid them at all costs. Image by Arnold Gatilao.

You bite into a crunchy taco that is filled with jalapeno peppers and spicy salsa. You don’t even realize how spicy it is until suddenly it feels like your tongue is on fire. Saliva fills your mouth and you gulp down bottles of water to calm your taste buds.

Many people avoid eating chili peppers because they cause a burning sensation. Similarly, most animals try to avoid chili peppers. But tree shews are an exception: they seem to like the spicy taste and eat more foods that have the chili pepper spice.

In the PLOS Biology article, “Molecular mechanism of the tree shrew’s insensitivity to spiciness,” scientists look at why tree shrews are so different from other animals. They found that the tree shrews’ taste preferences are likely due to adaptations to their environment.

For plants, life can be quite dangerous. There are always animals who want eat them. To prevent this, many plants have developed a wide range of clever defense systems. 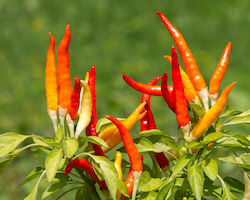 Chili peppers have a chemical called capsaicin that makes them spicy. This helps keep many animals from eating the peppers. Image by PierreSelim.

One such system depends on chemicals. Many plants produce chemicals that protect them from being eaten. For example, the chili pepper shrub bears fruits that contain the chemical capsaicin. Capsaicin causes a burning sensation by triggering the movement of ions in the nerve endings of the tongue. Therefore, most animals have learned to avoid the plant.

Humans are an exception to this rule. Although we are sensitive to spicy food, we can train ourselves to enjoy the burning sensation. But tree shrews aren’t likely to train themselves to eat something spicy. Tree shrews, which are closely related to humans, also seek out chili peppers. Unlike humans, tree shrews have a good reason to like spicy foods—spicy pepper plants live in the same area and not many other animals eat them. That means they can be a reliable source of food.

Tree shrews are found in Southeast Asia, in regions that contain the pepper plant, Piper boehmeriaefolium. This plant contains a chemical in its leaves called Cap2, that is very similar to capsaicin. The tree shrews seem to be insensitive to the burning sensation caused by Cap2. What causes this insensitivity?

The Difference Between Tree Shrews and Mice 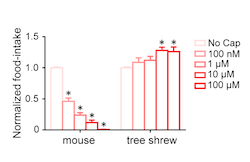 This graph shows the amount of food at different levels of spiciness eaten by mice versus tree shrews. Click to enlarge.

The Tale of tsV1 and Tree Shrews

You might be wondering how, exactly, a shrew can eat a food that mice find spicy without being affected. What is different that makes them so insensitive to the spice? This is what the scientists wondered. 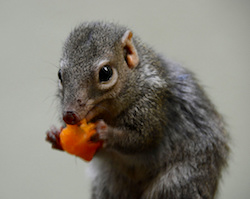 Can tree shrews eat peppers because they have fewer neurons that feel pain? Click to enlarge.

Eating capsaicin causes painful sensations in the tongue. These sensations are felt by neurons called nociceptors that can detect pain. So, scientists wanted to check if tree shrews had fewer nociceptors than humans or mice. To check, they looked at the genes associated with spice sensitivity in tree shrews, humans, and mice. Tree shrews, humans, and mice had a common ancestor long ago and therefore have many genes in common. Surprisingly, they discovered that tree shrews seem to have a larger number of genes that help make proteins called tsV1, which are nociceptors. If they make more of these proteins, they should be more sensitive to the pain of peppers… unless these are different from the nociceptors in mice.

To test how the nociceptors in tree shrews and mice might differ, the scientists compared how the tsV1 proteins as well as the mV1 proteins (the nociceptors in mice) respond to more or less capsaicin. When the nociceptors are activated, they release current in the form of calcium ions. These ions are detected with the help of a dye. They found that 26 times more capsaicin was required to activate tsV1 versus mV1. 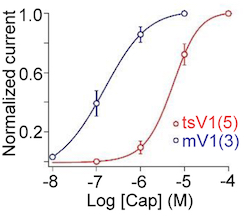 This graph shows the amount of current produced in response to capsaicin concentration. Click for more detail.

The reduced sensitivity of tsV1 is because of the way the protein is folded. Proteins are chains of smaller subunits called amino acids. The 3D shape of these amino acids affects the final protein shape. In the case of tsV1, the shape of the amino acids reduces how well the protein can bind to capsaicin. Therefore, a larger amount of capsaicin is required to get a response from tsV1.

Tree shrews are found in habitats that have a lot of Piper boehmeriaefolium. This tree has the chemical Cap2 in its leaves, which is very similar to capsaicin. But if any tree shrews in the population were less sensitive to Cap2, and could eat the Piper plants, they would have more resources available to them. This could help them survive and reproduce. This made scientists think it is likely that tree shrews evolved to be less sensitive to the spicy taste of Cap2.

However, there are other plants that are spicy in different ways. For example, eating ginger and garlic can also be painfully spicy. Additionally, these plants are also found in the same habitat as the Piper plant. Did the tree shrew evolve to eat all these different plants? 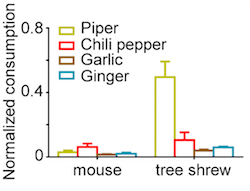 Plants and animals constantly evolve to survive. A plant that has a good defense system will often be left alone. However, if an animal can evolve a way to tolerate a plant's defenses, they might have more food options. This gives them more energy to survive and reproduce, so it helps make them more successful. The preference that tree shrews have for this spicy food appears to be an adaptation to use defensive plants that live alongside them.

Additional images via Wikimedia Commons. Tree shrew in tree via Pixabay by onkelramirez1. 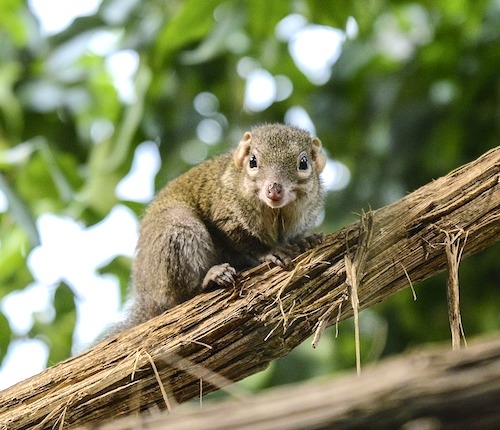 Did tree shrews evolve to eat spicy foods?
Molecular Mechanism of the Tree Shrew’s Insensitivity to Spiciness
Learn how to read a scientific article