Close-ended: a type of question that limits the person responding to a small number of choices. An example is a multiple-choice question.

Neuroscience: a part of biology that studies the brain and the nervous system.

Open-ended: a type of question that lets a person write out her or his own answer. An example is a short answer question.

Sample size: the number of people or animals involved in an experiment.

Survey: a process used to collect data, like facts or opinions, from a group of people to try to estimate what the responses might be from a larger group of people.

A blue glow becomes brighter with each step as you walk down a dimly lit hallway. You enter an open room with a huge glass wall. Behind it, fish of every shape and size cruise through the water. You stand for a while with your face pressed to the glass to see little crabs scurry across rocks and sand as they move about the tank floor. As you are about to move on to the next room of the aquarium the color of a rock changes. And… it has tentacles? 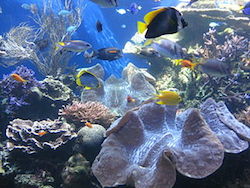 If you look around an aquarium tank, you may not see all the animals at once. This is because many animals that live underwater are good at blending in with their surroundings. Image by meowmeow10.

An octopus has been hiding right in front of you, and you watch in disbelief as it propels itself across the tank to a patch of coral. In an instant it has changed its color to match the bright coral and it disappears before your eyes.

You scratch your head and think to yourself – “how did it do that?” Octopuses must be very smart creatures to be able to hide so well in their surroundings. Knowing that the brain is what allows people to do things like think and make decisions, you start to wonder if maybe octopuses have brains too. And if they have a brain, then what other animals may also have brains?

As it turns out, scientists are becoming more interested in knowing what students think about brains. In the PLOS ONE article “"Do Octopuses Have a Brain?" Knowledge, Perceptions and Attitudes towards Neuroscience at School,” scientists explored what students of different ages understood about the brain. This included both what the brain does, and what types of living things have a brain.

In this experiment, scientists created a survey to help them understand students' knowledge and interest in neuroscience. A survey is a list of specific questions that can be used to help learn what people know about a subject. Questions on the survey were all about neuroscience, including 12 close-ended questions and 1 open-ended question:

Scientists gave the survey to 508 students in grades 3 through 10. This large sample size helped them get data from many students, giving the scientists a solid understanding of student knowledge of neuroscience. When looking at the survey responses, scientists created three groups based on the students' ages. These included elementary (grades 3-5), middle (grades 6-8), and high school (grades 9-10). After collecting the responses, the scientists compared how students in each grade answered the survey questions.

Think about what your brain is doing right now. You’re reading this page and making sense of it. But your brain is also helping you do things like using your muscles to sit upright and to move the computer mouse with your hand. Scientists found that when they asked students what their brains were doing while they were answering questions, few thought that their brains were doing things like helping their hearts to pump or their lungs to move to help them breathe.

Scientists also asked students whether they thought the brain was important for feeling different emotions. You’re excited about the weekend, or anxious about an upcoming test. But where do those feelings come from? Most students answered correctly that the brain is where these feelings come from, but others reported that they may come from other places too, like the blood and heart.

Who Has a Brain? 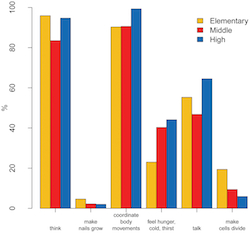 It is common to think that only certain living things, like humans, have brains. But many other living things also have brains that help them to do different jobs to help them survive. For example, octopuses have a brain and use it to change colors and shapes to make them look similar to what they see in their surroundings. This helps them to hide from predators.

So what other living things have brains? Scientists asked students this question and included choices like bees, sharks, chimps, and octopuses. Most of the students believed that animals like horses and chimps have brains, but other species like octopuses and bees do not. But all of these animals have a brain. And as it turns out, octopuses might be some of the smartest animals on the planet. 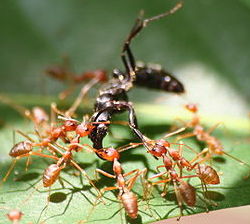 These weaver ants use their brains to work together to carry a larger bug. Image by Evdaimo.

When they looked over all the answers, scientists concluded that students had some understanding of the brain, but their knowledge was not complete. For example, students were able to understand the basic anatomy of the brain, such as its location in the body and that it's made of neurons.

But students didn't seem to understand two key things. The first was information about how the brain works. For example, how do neurons talk to each other to help us feel emotion and hunger?

The second was how the human brain works in comparison to the brains of other species. Do we have the same brain parts, and do those parts have the same functions? Students tended to think that other animals could not do complex things like humans can. 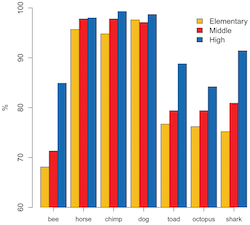 If you could find out anything about the brain, what would it be? Through this open-ended part of the survey, students reported to be most interested in learning about the different parts of the brain and how they work to help us to be smart and remember things. Other students were curious about how the brain develops and whether it’s true that we only use 10% of our brain. It turns out that we use all of our brain, but development causes each person or animal’s brain to be unique.

Scientists learned that students are definitely curious about neuroscience but still don’t have a great understanding of how the brain works. Maybe this is because of the way neuroscience is taught in school, and in what grade students begin to learn about this topic.

Overall, scientists concluded that neuroscience should be taught to students earlier in school to improve understanding of the topic. They also thought neuroscience should be taught in a more comparative way. This means that teachers would compare different species to explore what we know about brains in general. This type of approach would allow students to understand the brains of both different animals and those of humans. 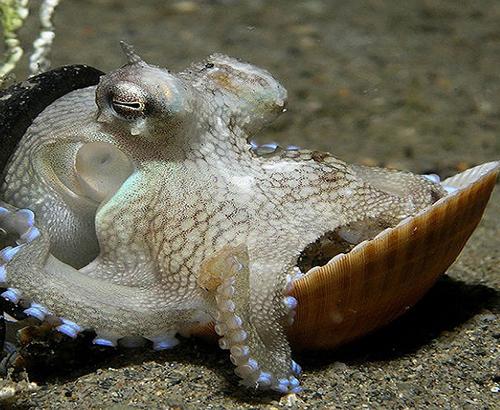 Octopuses are very smart. Some will use their tentacles to carry shells around with them to use as protection. When a predator or other threat is detected it will quickly close the shell to escape any danger.
"Do Octopuses Have a Brain?" Knowledge, Perceptions and Attitudes towards Neuroscience at School
Learn how to read a scientific article