The Tadpole or the Egg?

Expedition: a journey, usually to explore a new place or for scientific research.

Internal fertilization: when a male sperm fuses with a female egg inside the female’s body.

Intromittent organ: the external organ of a male that is used to deliver sperm for internal fertilization.

Life history: the development an organism goes through (or the changes it experiences) over its entire life.

Scientists searched for the fanged frog in the forests of the Sulwesi island in Indonesia. Image by Ariefrahman.

You’re in the thick forests of Indonesia and there are no villages or people around for miles. Mosquitos buzz around your face as you work your way through deep mud and dense bushes. Exhausted from the long, hot journey, you pause, but then continue on your mission. You’re searching to discover something that no one has ever seen before. Is it a treasure chest? The fountain of youth? Or the remains of an ancient civilization? Just then, you hear it right in front of you. “Ribbit, ribbit.” Believe it or not, your impressive finding is a frog.

Scientists have been studying the life cycles of frogs for a long time. The more research scientists conduct, the more we learn about the different ways that frogs develop. In the PLOS ONE article “A Novel Reproductive Mode in Frogs: A New Species of Fanged Frog with Internal Fertilization and Birth of Tadpoles,” scientists investigated a new way that frogs reproduce.

Hatching isn’t for Everyone 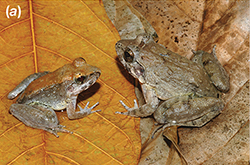 A male (left) and female (right) fanged frog sit on a large leaf. Click to enlarge.

Typically, frogs lay eggs. This process usually occurs through external fertilization, where the female releases her eggs from her body into water. Then, the male releases his sperm to fertilize them.

However, a few species of frog use internal fertilization. In this case, the eggs are fertilized inside the female’s body before they are released. All mammals, including humans, use this process of fertilization.

For many years now, scientists have known about a species of fanged frog, Limnonectes larvaepartus, found in the forests of Sulawesi (an Indonesian island). However, little was known about how this species reproduced. 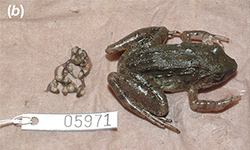 Inside of the female fanged frog, the researchers found developed tadpoles rather than eggs. Click to enlarge.

In a recent expedition to Indonesia, scientists went out to explore streams and other bodies of water. They searched for these fanged frogs, and caught them with their hands. After catching a number of these frogs, they discovered something unexpected.

Instead of eggs, they found tadpoles inside the frogs. The scientists first noticed this while dissecting, or cutting into, the bodies of dead frogs. They did this to better understand the internal structure of the frogs. 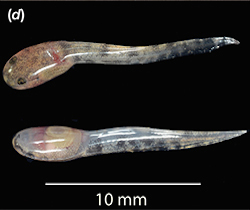 A close-up view of the tadpoles found inside a female fanged frog. Click to enlarge.

The scientists also wanted to study the body tissue and DNA from the frogs to map the frogs' genes. This would help scientists to learn the relationship between this frog species and others.

In the bodies of some female frogs, scientists found fully developed tadpoles. In one instance, a pregnant female gave birth to live tadpoles on the hand of a researcher who caught her.

These tiny tadpoles were mostly clear in color with spots around their bodies. This finding is very unusual because scientists only expected to find eggs, which are common in most female frogs.

A One of a Kind Frog

Why does this difference make the fanged frog so special? Well, there are over 6,000 known species of frogs, and this is only one that scientists know of that gives birth to live tadpoles. 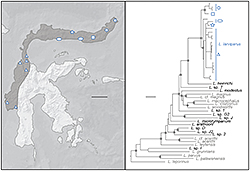 Scientists used a map of Indonesia to show the locations of the fanged frogs they found, and how these related to other similar frog species. Click for more detail.

The only frogs that give birth in a similar way come from two African toad genera, Nectophrynoides and Nimbaphrynoides, and a now extinct species, Eleutherodactylus jasperi. These species give birth to miniature frogs, called froglets, rather than tadpoles. This makes the reproductive process for the fanged frog unique to any other frog that scientists currently know about.

Scientists discovered that the fanged frog uses internal fertilization. Though internal fertilization is found in other frogs, the other species either lay eggs or give birth to froglets. Discoveries like this are very exciting because it opens a whole new door of possibilities for how frogs reproduce. It also brings up questions about the larger role they have in the ecosystem because of their unique life history.

The Secret Life of Fanged Frogs

For the few frog species that use internal fertilization, the males use an intromittent organ. This is a tail-like structure located at the end of their bodies that they use to transfer sperm into the female. 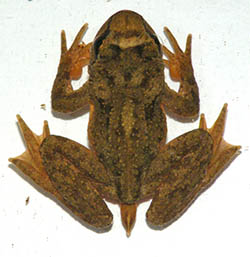 In general, the intromittent organ allows a male to deliver sperm to the female during internal fertilization. Scientists were puzzled that the male fanged frog did not appear to have this organ. Image by Mokele.

However, such an organ has not been found in male fanged frogs. This has left scientists puzzled as to how the eggs are fertilized. Unfortunately, no one has seen this fanged frog mate in the wild.

There is still much to be learned from the fanged frog, such as how females know when to give birth. But then again, there remains much more to be discovered in this strange, bizarre, and amazing world of ours.

Click here to learn more about this new species of fanged frog.

Additional Images via Wikimedia Commons. Image of 2 tadpoles by Tarquin.

Gordon Lau. "The Tadpole or the Egg?". ASU - Ask A Biologist. 26 February, 2015. https://askabiologist.asu.edu/plosable/tadpole-or-egg 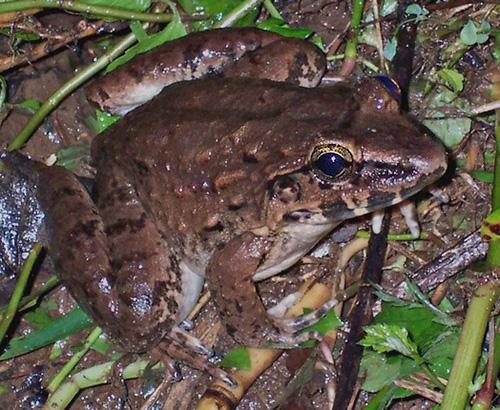 The forests of Sulwesi, Indonesia, are home to the fanged frog.
A Novel Reproductive Mode in Frogs: A New Species of Fanged Frog with Internal Fertilization and Birth of Tadpoles
Learn how to read a scientific article