Basal Forebrain: a part of the frontal lobe that is important for learning and memory.

Frontal Lobe: a part of the brain that helps us make decisions, think abstractly, and that shapes our personalities.

Motivation: the reason a person has for acting in a particular way or carrying out some action.

Motivational Salience: something that makes you feel especially motivated. An example would be feeling motivated to do well on a test in order to get a good grade.

Reaction Time: how quickly a person reacts to something. An example would be how quickly you would start running after someone yells “go!”

Salience: a quality of a person, place, or thing that makes it stand out more when compared to other similar people, places, or things. 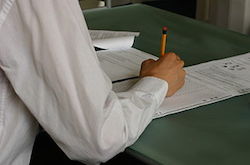 Tests can be stressful sometimes, but good grades can motivate us to prepare for them and do well. Image by Alison Wood.

You're sitting in a quiet classroom. You see the students around you going through the quiz like it's no big deal, quickly scribbling their answers down. Looking back down at your quiz, you feel nervous. You tap your pencil against your desk and try to remember those last few answers. You start thinking about how much you want to get a good grade. Suddenly, the correct answers come to you. You write them down, and that nervous feeling in your stomach goes away.

Do you ever wonder where that nervous feeling comes from and why it seems to help you think a little better? Perhaps the thought of a good grade motivates you to remember those last few answers. In the PLOS Biology article “Motivational Salience Signal in the Basal Forebrain Is Coupled with Faster and More Precise Decision Speed,” scientists investigated why we tend to make better decisions when we are motivated. 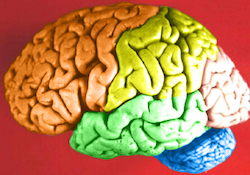 Scientists thought that the basal forebrain, located in the orange colored frontal lobe shown here, might be important for learning and memory. Image by John A. Beal.

A specific part of the frontal lobe, the basal forebrain, is very important for learning and memory. What does this have to do with your motivation for doing well on a test? Well, scientists thought that the basal forebrain could be an area that lets people respond to motivational cues, including the desire for a good grade. This is what they decided to test.

Motivation is the desire to do something and it's usually due to some sort of reward. It is a reason a person has for acting in a particular way or carrying out some action. However, we are all motivated by different things. 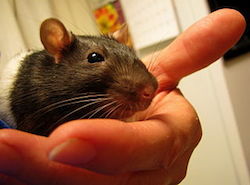 Scientists used rats to test motivational salience. Scientists use animals for experiments when using a human would not be possible. Image by Fae.

Scientists used rats to test these differences in motivation. Why rats? Usually, animals are used for experiments when using a human would not be possible. Scientists wanted to record from the basal forebrain, which meant that they needed to put electrodes into the brain. Unless a person is having surgery, it is unlikely that she or he would allow a scientist to do this. Because of this, scientists will often use an animal model so that they can learn more about the way human bodies work.

If rats were motivated with something positive, like a reward, scientists guessed they would learn faster than when there was no reward. They also thought larger rewards would make for faster learning. To study this, they had rats learn the relationship between different cues and rewards.

The scientists played sound to the rats that acted as a cues. The rats were then given a reward in response to each cue. These cues were motivational for the rats because from the cue, the rats could tell how big of reward they would receive. A “large” sound would mean a big reward; a “small” sound would mean a small reward. In all, they wanted to test if the rats would match these cues with the size of the reward. 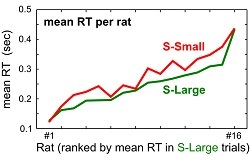 Scientists found that the rats performed the tasks more quickly when the sound was for a larger reward versus a smaller one. Click for more detail.

The reward in this case was cool water. Cool water was especially rewarding because the rats were not given water on the day before the experiment. Because the rats were thirsty, cool water was a very motivating reward. To measure the rats’ behavior, the scientists measured something called reaction time. Reaction time was how quickly the rats drank the water after they heard the sound.

Bringing It All Together 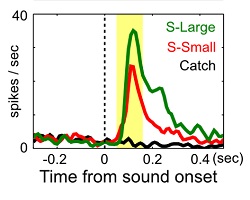 Scientists found that there was more activity in the basal forebrain when the rats heard the sound for a large reward. Click for more detail.

Scientists concluded that the increased activation in the basal forebrain might be what was making the rats move more quickly when a larger reward was available. This part of the brain could be one of the areas that allow us to respond to motivation.

So How Does This Relate to People?

Besides explaining that your brain is more active and responds more quickly when larger rewards are offered, there are some other important things we can learn from these findings. This experiment supports the connection between the basal forebrain and motivation. Because motivation helps us to perform one action versus another, scientists think that the basal forebrain may be an area that is active when we make decisions.

People with conditions such as schizophrenia or depression can sometimes have trouble making decisions. Scientists believe that a problem with the basal forebrain may be causing some of the symptoms in these conditions. These findings could lead us to a better understanding of these problems and how to treat them.

But these findings might apply to you anytime you have to think fast. So the next time you’re taking a test and you are motivated to get that higher grade, thank your basal forebrain. 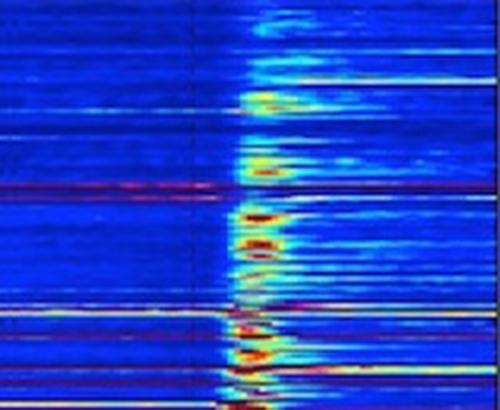 Scientists can use recordings from brain cell activity to make color maps that let them look for patterns.
Motivational Salience Signal in the Basal Forebrain Is Coupled with Faster and More Precise Decision Speed
Learn how to read a scientific article