Carrying capacity: the maximum population size that can live in an environment, usually determined by natural limits like food, water, land, and other species. 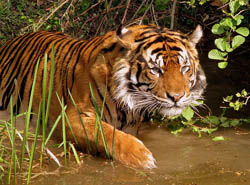 There used to be many tigers in Asia, but now they are an endangered species. Scientists are trying to bring tigers back from the brink of extinction.

People learn about tigers at a young age, from Tigger bouncing around in Winnie the Pooh to Shere Kahn in The Jungle Book. Tigers are grand, majestic creatures, but you are more likely to see one in the zoo than in the wild. Today tigers are in danger of becoming extinct, dying out as a species. In the PLOS Biology article, “Bringing the Tiger Back from the Brink—The Six Percent Solution,” scientists present a plan to help protect tigers and the places that they live.

Although you see tigers in almost every zoo, fewer than 3,500 tigers are left in the wild. While 3,500 may sound like a lot, this is only 7% of how many tigers used to roam free. 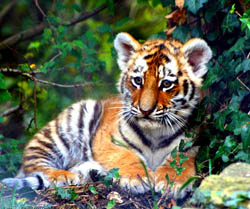 The more tiger cubs that are born, the better chance tigers have of making a comeback.

The tiger population has declined over the past few decades because of many reasons, including destruction of their habitat and illegal hunting by humans.

You might be thinking: why not just protect where the tigers live to keep the habitat secure and free from hunters? The problem is that tigers are found in a huge area, which makes it difficult to enforce bans on hunting this endangered species. For instance, in Asia, the species' range or occupied territory covers more than 1 million square kilometers of land!

Bring Tigers Back from the Brink of Extinction

In November of 2010, people concerned with protecting tigers got together with people who had money to fund tiger protection. They met with state leaders in Asia where tigers live in the wild. They called the meeting the Tiger Summit, and their goal was to prevent the extinction of these big cats.

The people who attended the Tiger Summit talked about different ways to protect tigers and their habitats, so that tigers could start to breed and create a larger population. The plan that came from the Tiger Summit was to protect tigers and their habitats in a small number of carefully selected areas (about 6% of the total area that tigers live) rather than trying to protect all tiger habitats from destruction and poaching. It would be easier to enforce this type of focused effort. 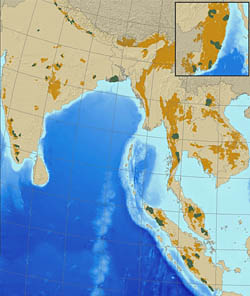 This map shows the location of 42 source sites. It also shows how large the tigers' habitats are compared to the small 6% source site solution. Click to enlarge.

Tiger habitats are so large the Tiger Summit planned to focus on protecting small areas called “source sites.” These source sites are environments where there are at least 25 female tigers present, but which had the “carrying capacity” to support at least 50 female tigers. Carrying capacity is how many animals can be supported in a certain environment based on the resources present.

It may sound strange that the Tiger Summit only wanted to protect 6% of the tiger’s immense natural habitat, but the participants had to compromise. And if they protect more female tigers, it is more likely that more tigers will be born in the future. The more tigers that are born in nature, the less likely it is that tigers will be an endangered species. The World Wildlife Fund, an organization devoted to conservation and endangered species, examined the Tiger Summit and said that the plan would help to double the tiger population by 2022.

The Six Percent Solution is the first step to take in order to keep this endangered species alive and well. Hopefully, thanks to these conservation efforts, tigers will still be around when you read Winnie the Pooh to your kids, and they will know just who Tigger is! 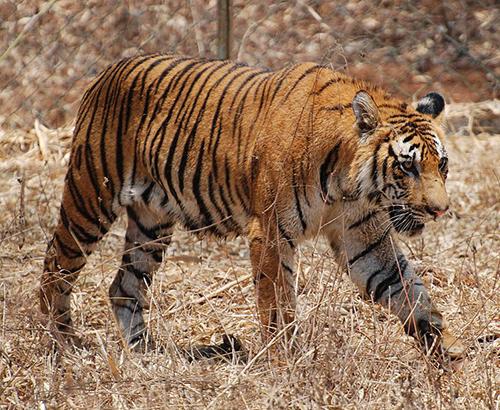