When Ecosystems get Fishy

Ammonium: a positively charged molecule that is made of a nitrogen atom and four hydrogen atoms.

Biogeochemical Hotspot: an area where more nutrients are being added to an ecosystem compared to other locations. 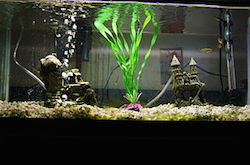 Scientists were studying the pleco fish, a species that is popular in tropical fish tanks. Image by Fastily.

Today was the day. You are now the proud owner of your first pet. You bring home your fish and put it in the new aquarium in your house. You plan to watch it grow every day. As you think about it, you wonder what would happen if your fish were to become too big for its tank. Maybe you could release it into a river or lake near you.

However, if your pet fish does not normally live in that river or lake, releasing it there could cause problems. Your fish might have babies, creating a whole new population of fish. These fish could become what some people call an invasive species.

Scientists are beginning to study how the introduction of new species to an area can change the local ecosystems. In the PLOS ONE article, “Invasive fishes generate biogeochemical hotspots in a nutrient-limited system,” scientists looked at the effects of a fish, known as the pleco, on a river in Mexico where it was introduced.

Adding to the Ecosystem

Ecosystems are a lot like computers. They are both made up of many parts, and if something happens to one of the parts then the ability of the whole system to function will change. If you install a new program onto a computer, it will change the way the computer works. Similarly, if you add a new species into an ecosystem, something must change in the way that the ecosystem works. 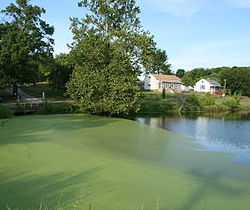 When there are more nutrients in a pond, lake, or river than the plants need, big green globs of algae can form and make them unpleasant places to swim. Image by Ildar Sagdejev.

Scientists were interested in how the addition of a fish species would affect how a river ecosystem functions. Specifically, they wanted to know if large groups of fish that gather together in a certain area of the river would cause nutrients to move more quickly between fish and other living things in that area. An area where more nutrients are being added into an ecosystem than normal is known as a biogeochemical hotspot.

The availability of nutrients can determine how quickly living things, like plants and algae, are able to grow. For example, the grass in your yard usually grows more quickly when you add fertilizer to it. In a similar way, invasive fish can be like a fertilizer for certain areas of the river. This can cause additional plants to grow, which could affect the ecosystem.

Think about what happens when you play in a nicely kept lawn vs. an overgrown field. It’s a very different experience. The same thing happens in lakes and rivers. When there are more nutrients than the plants need, big green globs of algae can form and make them unpleasant places to swim. Scientists were particularly interested in studying a fish called the pleco, which normally lives in rivers in South America. This common name actually refers to many species of fish. 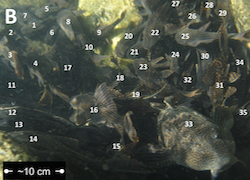 Scientists counted the number of fish in a particular area of river. They did this at night when the fish normally feed and during the day when they gather together. Click to enlarge.

But in this case the scientists were studying a particular species that is popular in tropical fish tanks. Some of these fish end up being released into rivers around the world.

To test whether the pleco fish were fertilizing certain areas of the river,scientists counted the number of fish in a few particular areas of river. They did this at night when the fish normally feed and during the day when the fish gather together. Since the pleco fish gather during the day in only one particular area, the number of fish in a given area (the density of the fish population) throughout the rest of the river is low during the day and increases as they spread out to feed at night.

Scientists aren’t exactly sure why the fish gather into such large groups during the day, but it might be to protect them against predators. The scientists also collected samples of the water from these areas to measure the amounts of nutrients, such as nitrogen and phosphorus, in the water.

Scientists also measured how much of these nutrients were released by the pleco fish. They put fishes into a bucket of water for one hour and measured how much the concentrations of nutrients in the bucket increased. They did this test during the day and at night. By doing this, the scientists were able to calculate the amount of nutrients released by the fish during the day and at night for the same area of river. 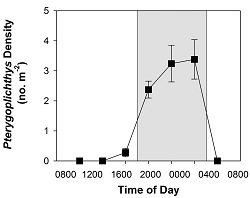 Because these fish spread out to feed, they release nutrients over a larger area. Scientists found that the concentrations of nutrients increased throughout a larger area of the river. Click for more detail.

Fish feed mostly at night, and so they release more nutrients, especially ammonium, at night than during the day. Because these fish spread out to feed, they release nutrients over a larger area. Scientists found that the concentrations of nutrients increased throughout a larger area of the river.

These scientists demonstrated how the addition of just one species to the river can greatly change the functioning of a whole ecosystem. The pleco fish increase the amount of nutrients being added to areas where they gather. This changes the availability of those nutrients to plants, algae, and other animals in the ecosystem. While the scientists did not measure the growth of plants or algae in this study, scientists also believe that the concentrated nutrient hotspots could have strong effects on plant growth as well.

Overall, this study shows why it is important for the pet fish in your aquarium to stay out of the wild. Just think, the next fish someone releases into the lake or stream near you could have the same kinds of impacts the scientists reported in this study. 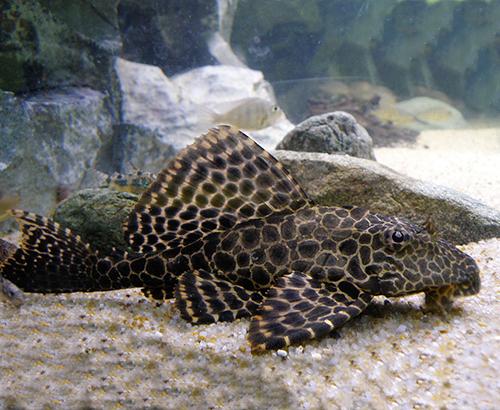 Certain kinds of pleco fish are commonly kept in aquariums.
Invasive fishes generate biogeochemical hotspots in a nutrient-limited system
Learn how to read a scientific article