Where Are the Insects?

Ovisac: a sac that stores eggs inside the insect body.

Sensor: a tool that senses physical properties, like motion of a person or object. 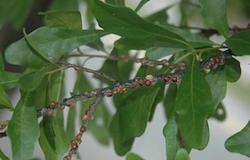 You’re walking down a city street as the sun drops behind the horizon. The street lights overhead light up, giving you a view all the way down to the next block. You see little shadows on the sidewalk in front of you, and you look up to discover a swarm of insects - big and small – buzzing around the glow of the light. As they fly in and out of the trees overhead, you wonder what all those insects are, and what they are doing in the city.

Did you know that there are many more insects in cities than in rural areas? Scientists think that there are so many in cities because cities tend to be hotter than the rural areas around them. But why does the warmth of cities increase the number of insects? In the PLOS ONE article, “Urban Warming Drives Insect Pest Abundance on Street Trees,” scientists describe the relationship between urban heat and the number of oak-tree-dwelling insects Parthenolecanium quercifex, also known as the “oak scale.”

Why is it so hot in the city, anyway? Urban areas are usually hotter than rural areas because of something called the urban heat island effect. The urban heat island effect is due to a decrease in plants and an increase in concrete, like sidewalks and streets that cover the land in urban areas. When the sun shines on a city, the concrete absorbs heat. All of that trapped heat is then slowly released, which means that the city stays hot even after the sun goes down. 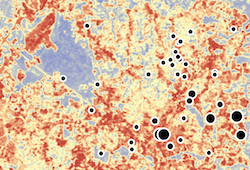 This “heat map” shows the temperature on the ground in the area around Raleigh, North Carolina. Click for more detail.

Scientists are studying the effects of temperature and the heat island effect on animals, including insects. Insects are ectotherms. This means that they depend on the temperature of the environment to control their body temperature.

Scientists studied the oak scale, an insect that lives on willow oak trees. This insect is much more common in cities than in rural areas. The scientists found that there are up to thirteen times more oak scales in the city of Raleigh, North Carolina, than in nearby rural areas.

But why are there were so many more oak scales in the city? To figure this out, the scientists first wanted to find out whether the larger numbers of oak scales inside Raleigh was really due to the urban heat, or whether it was caused by something else. Next, if urban warming really was to blame, they wanted to know how the heat of the city caused there to be so many oak scales. Was it because the heat was bad for parasites that hurt the oak scale? Was it because the heat helped the oak scale to lay more eggs, and have more young? 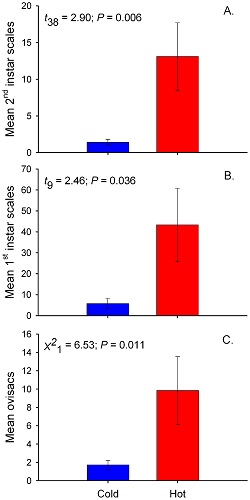 There were far more oak scales growing on hot trees than there were growing on colder trees in Raleigh. Click for more detail.

To find out whether the larger numbers of oak scales in the city were really due to urban warming, scientists counted up oak scales on trees all around the city of Raleigh. They found regions in the city that were hot or cold and had at least one willow oak tree. They then randomly selected 12 hot trees and 10 cold trees to collect the oak scales.

They used sensors to measure the temperature of each tree where they found oak scales. When comparing the numbers of oak scales found on hot trees to the number found on colder trees, scientists observed that oak scales preferred the heat. This suggests that the larger number of oak scales inside the city of Raleigh might be due to the urban heat island effect.

But what is it about the heat that helps the oak scales become so numerous? The scientists knew that there were a few different possibilities.

Second, they wondered whether the heat might cause the oak scales to have more offspring. To test this hypothesis, they opened ovisacs from insects found on hot versus cold trees, and counted the number of eggs inside. Again, there was no difference. 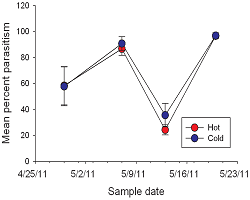 This graph shows the percentage of oak scale larvae living on hot (red) and cold (blue) trees that were infected by parasites, on four different days in the summer. Click for more detail.

Still with no answer, scientists had one last guess as to why there were more oak scales in the city. Maybe these insects were adapted to live in a hotter environment. This would make the city a great place for them to live. To test this final hypothesis, they collected oak scales from both hot and cold trees, and raised them in houses where they could

carefully control the temperature of the environment. They put the oak scales in either a hot or cold house, and kept track of how many oak scales survived over time.

In both the hot and cold houses most of the surviving insects were collected from hot trees rather than from the cold trees. The scientists concluded that the oak scales from the hotter trees were better adapted to living in either environment. 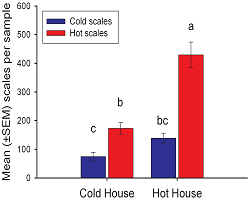 was because the urban heat island effect had actually increased the temperature in both regions.

Scientists also concluded that increased temperatures might have caused the low survival of the cold oak scales. The hot temperatures may make it more difficult for the cool oak scales to find the cooler temperatures they need to survive.

Even a small increase in temperature can have a big effect on animals. If heat has an influence on oak scales, it could have an even larger effect on other insects or animals. Studying the effect of urban heat on organisms can help us to understand why certain animals do well in the urban heat.

Terri Tang. (2014, June 05). Where Are the Insects?. ASU - Ask A Biologist. Retrieved December 7, 2022 from https://askabiologist.asu.edu/plosable/where-are-insects

Terri Tang. "Where Are the Insects?". ASU - Ask A Biologist. 05 June, 2014. https://askabiologist.asu.edu/plosable/where-are-insects 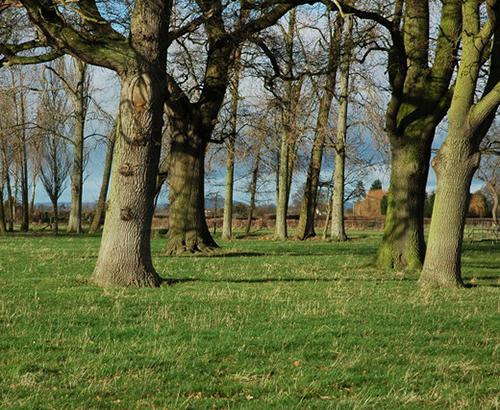 Oak scales live on oak trees, just like the ones you see here.
Urban Warming Drives Insect Pest Abundance on Street Trees
Learn how to read a scientific article