Why Are Our Arms the Same Length?

Endocrine system: the collection of organs and glands that help control how the body works by adjusting the amount and type hormones that are in the body... more

Estrogen: a female-specific hormone (also found in males in small amounts) that helps in growth as well as reproductive development... more

Thymus: an organ located near the neck and is part of the immune system. The thymus makes a hormone, called thymosin, that increases the growth of certain immune cells.

It seems like a simple question, but if you are having trouble answering, you are not alone. Scientists are still unsure of how exactly human arms, legs, ears, or lungs grow in such a symmetrical way.

In the PLOS Biology journal article, "Arms and the Man: the Problem of Symmetric Growth," a scientist by the name of Lewis Wolpert discusses his views on the matter. 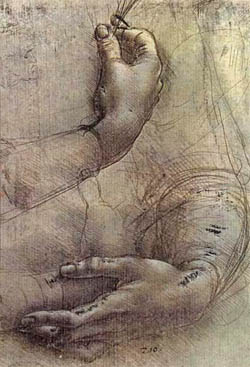 Study of Arms and Hands, a sketch by Leonardo da Vinci popularly considered to be a preliminary study for the painting "Lady with an Ermine." - Wikimedia

Wolpert believes it is important to distinguish growth from symmetry. Symmetry means similarity between two things, like cutting an apple down its center and looking at two sides that are almost the mirror-image of one another. It is harder to tell why paired body parts like arms and legs grow at the same pace and stay “in-sync” with each other.

Look at your arms. If your right arm was shorter than your left, it would be more difficult to do some things. Now imagine having a small left hand and a really big right hand. You wouldn’t be as good at playing video games, now would you?

As you grow up, your cells grow with you. Human bodies grow because their cells are in a constant cycle of proliferation. That means that new cells are created to replace old and dying cells. Hormones and organs in the endocrine system are also important because they signal and guide these new cells to tell them what kind of tissue to be, and what their role is in the body. Ever wonder why girls seem to be taller than boys during elementary and middle school? Estrogen, a female-specific hormone, helps bones in the legs, arms, and spine grow at a faster rate. Girls have more estrogen than boys do, so they are taller than boys during early adolescence.

Wolpert believes that bones grow because there is “some sort of signal system,” as part of a “growth plate,” in our bones that controls how long they grow. The growth plates produce cells that help bones to grow, but eventually the cells run out. Scientists like Wolpert are stumped as to how growth plates between matching arms or legs manage to grow the paired bones at exactly the same rate.

What Are "Growth Plates"? 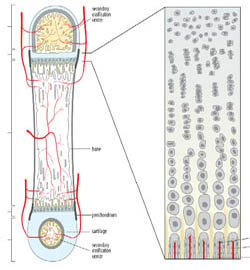 The image shown here may seem confusing, but let’s take a closer look. You are looking at a cross-section of a long bone, and seeing what’s inside all our bones. Look closely and you will see a growth plate at both ends of the bone. Growth plates are found only in children and adolescents because adults' bones have stopped growing. Once a person's bones stop growing, the growth plates completely disappear.

One of these growth plates has been magnified on the right hand side of the image. See all the tiny cells illustrated in the growth plate? These cells are the ones responsible for increasing the length of the bone and making your taller. To get even more specific, these cells are part of a tissue called cartilage. When a bone is growing, the cartilage is where cells proliferate, mature (grow), and extend the length of the bone. After you are done growing, cartilage is still present and provides bones with protection and smoothness.

Why Do Bones Grow Symmetrically?

Let's see where we are. We know about growth plates. We also know how hormones like estrogen and others are important for bone growth. Now we can try brainstorming ideas about why our bones grow symmetrically.

Wolpert feels that once we understand the signals controlling growth we will begin to understand how our limbs grow at an equal rate and length.

Russell Zuniga. (2011, March 23). Why Are Our Arms the Same Length?. ASU - Ask A Biologist. Retrieved February 1, 2023 from https://askabiologist.asu.edu/plosable/why-are-our-arms-same-length

Russell Zuniga. "Why Are Our Arms the Same Length?". ASU - Ask A Biologist. 23 March, 2011. https://askabiologist.asu.edu/plosable/why-are-our-arms-same-length 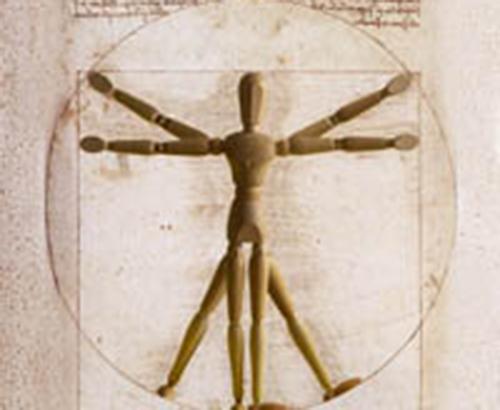 Symmetry is seen in humans and also in other plants and animals.
Arms and the Man: The Problem of Symmetric Growth
Learn how to read a scientific article