A Win-Win with Wind

Geographic Information System (GIS): digital tool that allows one to create, analyze, manage, and display information about spaces, like an interactive map.

Topography: Earth's shape and the features (like mountains, rivers, etc.) on Earth's surface.

You’re walking up a steep, snowy hill, dragging your sled behind you. As you near the top, a strong wind blows over the hill and against your body, forcing you to catch your balance. At this height, you can see for miles. 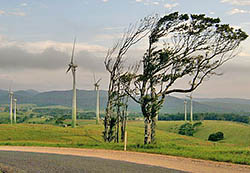 Spots that are higher, like the top of a hill or the top of a tall pole, get more wind than lower spots near the ground. Image by Leonard Low.

On the top of the hill the wind is more powerful because there are fewer barriers to slow it down. You go a little farther to rest under the big tree just ahead. Getting closer you realize the wind is much less powerful and you can walk more easily. The tree is blocking the wind, just like other structures do. Buildings and trees can slow down the wind and change its direction.

This effect of buildings and trees made scientists question which spots are best for putting wind turbines. Wind turbines use the power of the wind to generate energy. Having them closer to areas with a lot of wildlife can be problematic. Animals, like birds or bats, can be hurt or killed by accidentally flying into the blades.

If we know where animals live, then we can build turbines in breezy places without disturbing animals. Researchers present their studies on maps of animal occurrence, building and plant location, and the force of wind in the PLOS ONE article, "Optimizing Wind Power Generation while Minimizing Wildlife Impacts in an Urban Area." 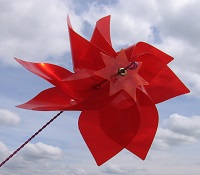 Toy pinwheels and wind turbines work the same way, by capturing the power of the wind to move. Image by Julo.

A wind turbine is a lot like a colorful toy pinwheel that spins with the wind. Real turbines are tall structures, with three or more blades that also rotate with the power of the wind. Wind energy can be converted into mechanical energy that travels through power lines into your home. As long as the wind is blowing, we can get energy from the spinning blades.

Turbines come in different sizes. Large turbines can be found away from towns and businesses. But some families, businesses, and property owners generate wind power for personal use, so they use smaller turbines rather than the large units that send energy to whole towns. 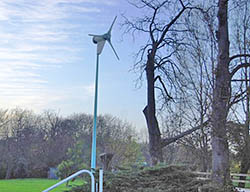 Wind turbines used for a single family or business can be very small. Image by Nigel Chadwick.

Wind power is a different form of energy than fossil fuels, like oil and gas. Fossil fuels come from the earth and are non-renewable. That means there is a limited amount. When we use them to run our cars or air condition our homes, our supply gets lower. People have designed ways to use natural resources like the sun, wind, and waves to get energy without worrying about running out or digging deep into the Earth. But where to put these energy-harvesting machines is sometimes problematic.

Getting to Know the Land

Location is important for wind energy because of wind patterns, the type of plants that grow in an area, and the presence of birds or other flying wildlife. The researchers compared these three factors to determine optimal wind power generation with the least impact on wildlife.

How Does the Wind Behave?

Just like you feel more wind when on top of a hill, wind turbines higher off the ground receive more wind. Closer to the ground, the wind is weaker. These differences were mapped out by a Geographic Information System (GIS) used in this study. The researchers created the GIS by using online, publicly available data about the study area.

They divided the mapped area into small squares of land and recorded information about topography, or land features, for each square. Then they added in data on wind patterns and strength, which vary over the landscape. This told researchers where the wind was strongest.

Here are two of the maps the scientists made of the study area. Click to see the full story.

In cities, the land is very different with each step you take. One minute you’re standing in a parking lot with the smell of asphalt wafting to your nose. A few strides later, you’re walking through a patch of grass with organisms and soil beneath your feet. 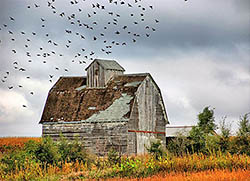 Isolated buildings can change the flight path of birds, so just imagine how much greater this effect is in cities crowded with buildings. Image by Carl Wycoff.

You also come across lots of buildings. If you've ever stood between two buildings, you may have noticed that the wind can actually speed up. Wind from the front of each building is pushed, or funneled, to the space between them, creating a stronger breeze. But when you are right behind or in front of a building, the wind isn't so strong, as the building slows it down.

To set up wind turbines in an area with buildings, roads, and trees, the researchers needed to understand how these structures affect wind power. With information about how the weather, plants, and buildings could affect the wind, a computer model was used to predict the speed and direction of wind over a college campus.

But researchers still needed to analyze the types and number of birds found in these areas. In the study area, the team found several species of birds and learned that they prefer water and unpaved areas, like grass.

Building a turbine or other structure in a bird's habitat may affect the bird's flight path. Changes in birds’ behaviors, like flying, could mean they don’t mate or get the resources they need to survive. If we want to help protect the homes and lives of birds and other animals, we need to think about where they fly before building wind turbines. This is especially important in places that already have limited space between buildings and trees. 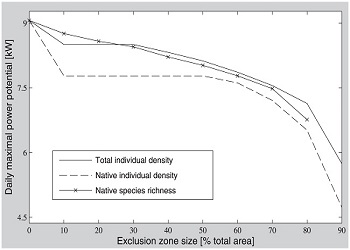 This graph shows that avoiding the areas birds use the most may not impact power output that much. Click on the image for the full story.

Researchers found that the overall wind power output does not decrease by very much if specific places where birds fly are left undisturbed. The areas called ‘exclusion zones’ in this study were areas where wind turbines could not be built because they would be hazardous to animals. According to the scientists' calculations, avoiding exclusion zones, whether small or large, doesn't have a big effect on wind power generation.

Placement of turbines is particularly important to minimize the threat to wildlife. This research shows why our energy decisions must keep many different things in mind, such as how structures change wind patterns and how wildlife responds to those structures.

Though we have more to learn, this study will help keep animals safer while we try to use better sources of sustainable energy. For wind power to be successful, we need to keep building on this work to find the windiest spots that leave wildlife out of harm's way. 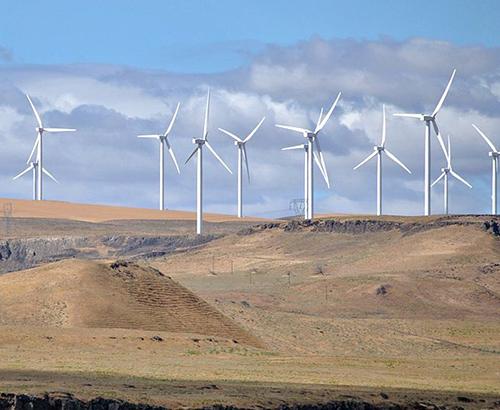 Wind turbines are important to our future, but can harm some animals. Researchers are learning where to place wind turbines for humans to benefit without hurting animal populations.