How to Introduce Students to the Scientific Method

One Size Does Not Fit All

The scientific method is the standard in the laboratory, but don’t be fooled by the name. It is also used beyond the laboratory to solve everyday mysteries and problems.

You can find more information on the game and how to implement it further down on this page. But first, let's look a bit into how exactly we're thinking about doing science more generally and how the scientific method fits into that. 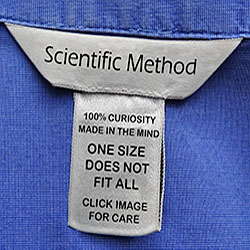 One size does not fit all when it comes to doing science or solving everyday mysteries. Click the image for care.

Steps Common to Versions of the Scientific Method

A quick Web search yields several different versions of the scientific method. Some have more steps, others have fewer steps. This can confuse students and teachers. Which one is correct? The short answer is most of them are correct.

Communicating What Is Learned

Science and the Scientific Method

For example, in the Monarch Monitoring Project, citizen scientists help count migrating monarch butterflies. Each year thousands of people from around the country spend time collecting critical butterfly census data. The Great Backyard Bird Count (GBBC) is another large citizen science project that relies on the help of people from around the country to collect bird data.

Are You and Your Students Science Detectives?

Science Detectives Training Room is a fun way to teach students from elementary level to college about the scientific method. It is also a great way to build problem solving skills. Based on a popular "room escape" genre of online games, players enter a dark room and must work through a set of problems to escape.

Once the player escapes from the first room, they encounter a summary of the steps they took to escape and how those steps match the steps of the scientific method. At the end of the game the player can print out the results of their training room exercise for review. If used as an assignment, students can submit the printout to their instructor to show how they performed in the activity.

The game then connects to a follow-up game, The Case of the Mystery Images, which allows students to practice their new detective skills. They are shown a series of images that they have to make hypotheses about in order to progress through the game. They can also print out their work in this game.

This is a question best answered by each teacher. Depending on the student or class, it might help to review the process involved in using the scientific method to solve problem. Previewing the game allows the student to experience what they have learned as they play the game. Other instructors, however, might choose to have students play the game first and then use the game summary printout as a tool for engaging students in a discussion of the process and parts of the scientific method, such as control, variables, and data. Either method is effective.

The average time to play the game is 5-7 minutes, depending on the grade level of the student.

The game has multiple options that are randomly selected as the player enters the room. Players are unlikely to have the same experience if they play the game several times.

This is handy for instructors who want to have students play the game in a classroom laboratory. Each student is likely to have a slightly different experience.

In order to escape, a player will be presented an opportunity to print the output of their training. The final report is personalized and can be used as homework or as an extra credit opportunity.

Read more about: Using the Scientific Method to Solve Mysteries 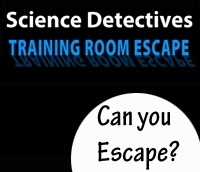 Perfect for students and teachers. Science Detectives Training Room introduces the scientific method in a fun game format. Do you think you can escape?