Decontaminate: using one of many methods to remove dangerous materials, such as dangerous bacteria and viruses, from an area.

Spelunker: a person who likes to explore and study caves as a hobby.

Bats in the eastern United States are dying and no one knows why. Scientists have noticed that dead bats have a mysterious white fungus growing on their nose, wings, and tail so they have named the culprit white-nose syndrome (WNS). But is the white fungus killing these bats, or is it is something else? This is the mystery and for bats a deadly one. Most recent research points to the  fungus Pseudogymnoascus destructans as the main cause of WNS.

So far more than 1 million bats have died from white-nose syndrome and this number is increasing every winter. Dead bats have been found in and around caves and mines in 10 eastern states ranging from New Hampshire to Tennessee. Bats that live in these states often hibernate in caves and mines to survive during cold winter months. 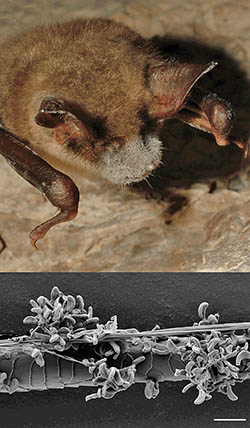 Greater mouse-eared bat (Myotis myotis) with white fungal growth around its nose, ears, and wing membranes (top). Scanning electron micrograph of a bat hair with the fungus originally classified as Geomyces destructans (bottom). After additional research the fungus was placed in the family Pseudeurotiaceae. The white line is equal to 10 micrometers.

Healthy bats will find a cave or a mine to hibernate in during autumn when the temperature starts to get cold. They hibernate all winter and wake up in the spring when the temperature is warm again. But bats with white-nose syndrome are acting a bit unusual. These bats hang out in cold sections of the cave or mine, fly during the day when bats are supposed to be asleep, and even leave their hibernacula in the middle of winter. Unfortunately, these bats often die in the freezing winter temperatures.

Scientists, state and federal agencies, and non-government groups are working together to solve the white-nose syndrome mystery. These groups hope to solve this case soon before even more bats are reported dead.

Where Are Bats Getting Sick with White-Nose Syndrome?

The first bats with white-nose syndrome appeared in 2006 and only in a few sites in New York. Since that time it is quickly spreading throughout the U.S. The occurrence of WNS in Tennessee just occurred this February of 2010. At this time there does not appear to be any signs of the syndrome in other parts of the world.

Updated map showing the spread of WNS from 2006 to 2015. Map by Lindsey Heffernan, PA Game Commission. Click to to enlarge.

How is WNS Spread? 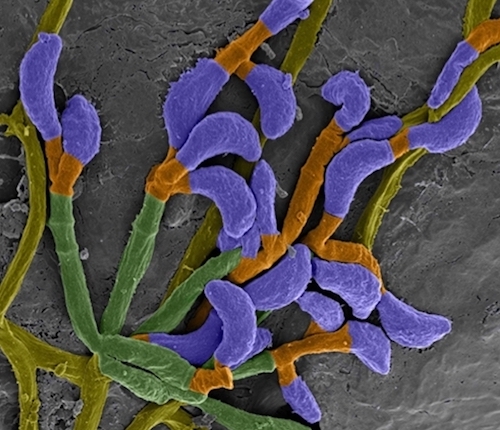 Scanning electron microscope picture of fungal hyphae and spores taken from a bat tissue sample. The color has been added and even though it makes the picture colorful, the fungus is still deadly to bats.