Double Helix: nucleic acid double helix is a biology term used to describe the molecule of DNA and RNA... more

Nobel Prize: a set of awards given each year in Physics, Chemistry, Physiology or Medicine, Literature, and Peace. Named after Alfred Nobel who on his death gave most of his fortune to establish the prize... more

Posthumous: an honor or award given after someone has died.

Scavenger hunt: a game where players search and gather items on a list.

In the early 1950s biologists were searching for the answers to some of the most important science questions left unanswered. How is information stored inside living cells? Could there be only one way these instructions were packaged? If there is, what does it look like? How did it work? All of these questions were an important part of biology and many scientists were racing to find the answers. 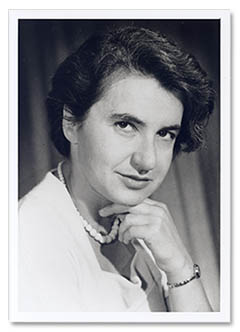 This portrait of Franklin was taken during her second visit to the United States. (National Library of Medicine NIH)

The answer came from a group of scientists who were working on their own projects as well as a few who were on a giant scientific scavenger hunt. James Watson and Francis Crick were two researchers who spent their time piecing together information that other scientists had published. They also spent time talking with scientists who were busy in their labs running experiments. One of these scientists was Rosalind Franklin (25 July 1920 – 16 April 1958). She was an expert in a technique called X-ray crystallography. Her work would hold the key to discovering the structure of DNA, the blueprint of life.

A Scientist from a Young Age

At the age of 15, Rosalind Franklin decided she wanted to become a scientist. Her father did not like this at all, because it was not considered to be appropriate. Yet she was determined and stuck to her plan. It was not always easy though. From 1951 to 1953, Franklin worked at King’s College in London. Her gender and her upper-class background made life difficult. It seems that some of her colleagues sneered at the way she spoke. On top of this women were not even allowed to enter the senior common room. This made her very angry, because many male colleagues had lunch there. However, none of this stopped Rosalind Franklin from making crucial contributions to science.

Rosalind Franklin used a technique called X-ray crystallography to find out the 3D shape of molecules. She applied this technique to different samples. Early in her career she worked on carbon and coal. Later she started working on biological subjects. She made major contributions to the discovery of the shape of DNA. After her work on this molecule, she also gave new insights into the first virus that was ever discovered: the Tobacco Mosaic Virus. She thought the virus might be hollow and only consist of one strand of RNA. Although no proof existed at that time, she turned out to be right. Unfortunately, this was not confirmed until after her death.

Two views of a tobacco mosaic virus. The side view (left) shows the helical shape of the virus. The top view (right) shows the opening in the center of the helix. Click on the image to see it larger and read more.

In 1962, James Watson, Francis Crick and Maurice Wilkins got the Nobel Prize for the discovery of the shape of DNA. Photo 51 was an X-ray diffraction image that gave them some crucial pieces of information. It was only after seeing this photo that Watson and Crick realized that DNA must have a double helical structure.

The problem was that Photo 51 was actually made by Rosalind Franklin. Maurice Wilkins, a colleague, had shown this picture to Watson and Crick without even letting her know. This added to the tension at the time of the discovery of DNA. Unlike her colleagues, Franklin was not awarded a Nobel Prize for her contributions to this important discovery. She died in 1958 and the Nobel Prize cannot be obtained posthumously.

While a lot of Rosalind Franklin's work used X-ray crystallography she also used other X-ray diffraction techniques. Her famous image of DNA called Photo 51 was made using a  X-ray technique that did not require the sample to be in crystal form. She used this method since DNA, like some other big molecules, does not like to form a crystal. Instead, DNA prefers to form organized fibers. Photo 51 still shows the classic diffraction pattern, but in this case the sample still contained water and was not a crystal. 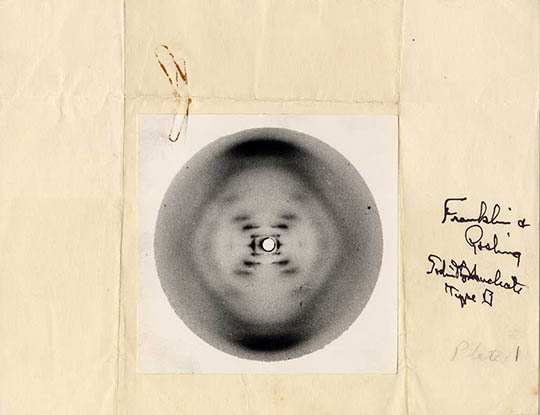 Picture of the famous Franklin X-ray : Sodium deoxyribose nucleate from calf thymus, Structure B, Photo 51, taken by Rosalind E. Franklin and R.G. Gosling. Linus Pauling's holographic annotations are to the right of the photo. May 2, 1952.

Janus, The Papers of Rosalind Franklin. Retrieved May 2012 from Janus

Photograph of Rosalind Franklin and Photo 51: Ask A Biologist tries to ensure proper permissions before posting items on this website. For these images we have not been able to identify or contact the current copyright owner. If you have information regarding the copyright owner, please contact Ask A Biologist using the feedback link in the gold box to the right. 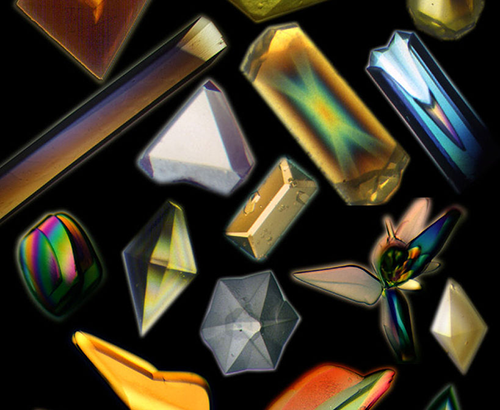 A collection of protein and virus crystals including the satellite tobacco mosaic virus. All were grown in space.