Composition: combining individual parts or pieces to make a new product. An author uses words to write a story and a musician combines notes to make a song.

Virtual: a simulated (made up) environment based on the real world. Often computers are used to create virtual worlds. 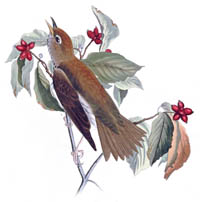 So birds can fly, swim, and show off some cool colors and patterns. They can also make some pretty amazing sounds. The musical ability of birds has not gone unnoticed by musicians who have included them into their music either using instruments to mimic them, or actually including real bird songs into their compositions.

Some of the bird songs in our virtual aviary have starred in some musical works. Composer Z. M. E. Barnes created two wonderful musical pieces that she shares with us. Listen in and then read her story behind these two compositions.

Notes from the Composer

Do you think birds sing the same sound again and again?

Have you ever tried to whistle a birdcall? Or even just recognize one? How do you make a musical instrument sound like a bird? How do you interact musically with birds? These were some of the questions I thought about when I decided to write compositions using bird sounds.

The first birdcall I learned to recognize was the Wood Thrush, which sounds like a flute player up in a tree. Next was another thrush, the American Robin. If you play drums or some other instrument, you can pick out one of the main parts of the robin's rhythm:  ta-dum, ta-dum, ta-dum.

A couple of years ago my family decided to raise pheasants over the summer. That was my best and most detailed introduction to bird sounds. The pheasants loved music, too. When they heard me playing the piano, they immediately crowded around the window to listen. Our pheasants had a musical language of their own. They called “Unknown bird warning,” “I’m happy,” “Lost chick!” “Following Mom and Dad,” “New food,” “Keep out of my territory,” and “Is that a snake?” Each call was unique, and most of them were in a sound range that I could easily make. Learning to imitate them was the best part of the summer. 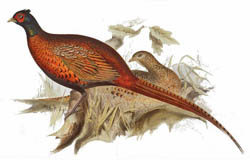 Birds and other animals have been inspiring composers and poets for a long time.  And birds have been very valuable to my life since I was a kid. They were fun to watch, to feed, and to listen to.

These two compositions are my way of reminding everyone that we have this one planet to call home. Caring for our home has always been an important goal. Recycling, gardening, composting, and not wasting things were part of the everyday code in my family. To us, every day was Earth Day.

I composed these Earth Day pieces using bird sounds because it was the just the thing to do. They are my reminder that we need to take care of what we have and protect it long into the future.

Download the reduced score versions of these two musical compositions

Other Composers Who Have Used Bird Songs 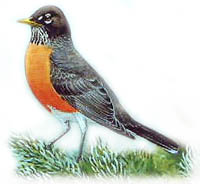 Wake up, wake up, you sleepy head,
Get up, get up, get out of bed

Olivier Messiaen a French composer, organist and not surprising an ornithologist also used bird songs in his works. An early composition is Le merle noir  (The Blackbird) a flute and piano piece based on the song of the blackbird. A few years later he expanded the use of bird vocals to create his orchestral work Réveil des oiseaux (Awakening of the Birds).

About the artist:  Z. M. E. Barnes is a composer, organist and musicologist who lives in Denton, Nebraska. These works are used with permission. 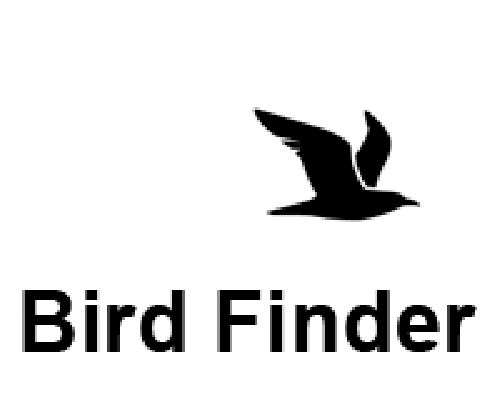