Qualitative: having to do with characteristics of an object such as color.

Quantitative: having to do with amounts and often using exact measurement.

Isaac Newton was 19 when he began his scientific studies at Cambridge University in England. He arrived at school in 1661 and began studying the work of Aristotle. The teachings of Aristotle had been the primary theories of science and nature for almost two thousand years. Aristotle had tried to explain the workings of the universe and nature in qualitative rather than quantitative terms. There were many more modern theories of nature and how it worked, but when Newton began his studies at Cambridge, all the universities taught only Aristotelianism.

Newton believed that tiny particles in nature were in constant motion.

While a student at Cambridge, Newton soon found himself more interested in the teachings of the French philosophers René Descartes and Pierre Gassendi than of Aristotle. Gassendi was responsible for the revival of atomism, which offered another method to explain the workings of nature. Both Descartes and Gassendi were part of a group called mechanical philosophers. They believed the physical world was built of particles of matter which are in constant motion. The mechanical philosophers also believed that all phenomena of nature resulted from the interaction of these particles. 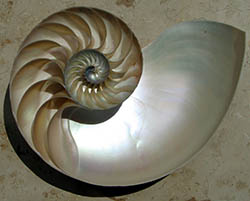 The nautilus shell is often used as an example in nature where change in growth can be calculated by calculus.

Newton was learning about particles and their interaction when he began his studies in math. In little more than a year he had mastered algebra, classical geometry, and the application of algebraic techniques to solve problems of geometry. Newton soon began to develop new math techniques, including calculus. Calculus was required to study motion. Without calculus, the study of physics would not have been possible. Armed with his natural mathematical talent and his knowledge of the mechanical philosophers, Newton was destined for a most remarkable career in science.

Many of Newton's experiments and discoveries were accomplished at a young age, but most were documented only in his notebooks. It was not until he was 42 years of age that he began to write. His first book was called Principia Mathematica Philosophiae Naturalis (Mathematical Principles of Natural Philosophy). It is generally accepted as the greatest scientific book ever written. Another of his books, Opticks (Optics), dealt with his work on light. 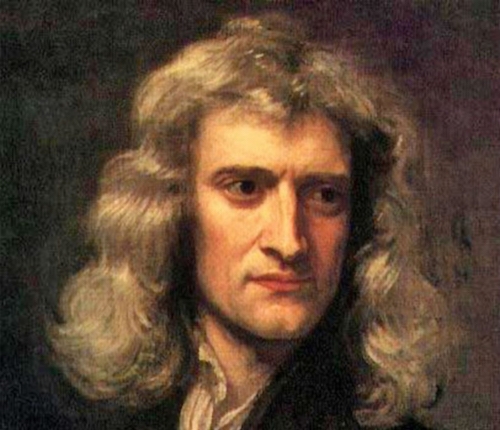 A painting of Sir Isaac Newton when he was 46 years old. The portrait is by by Godfrey Kneller.