Aspiring: a person's hopes or ambitions for achieving something.

The best thing about Kevin McGraw’s job is the freedom that comes with it. He gets to spend his days working on exactly what he wants to work on. Whether it’s research, teaching, outreach, or editing papers, there is always something new to enjoy.

The journey to his current position as an associate professor and researcher at Arizona State University is not one that could have been made just waiting for something to happen. Much of his early career involved traveling around the world - studying and learning about birds in places ranging from Arkansas and Alabama to Costa Rica and Panama. However, he says that, without first taking the time to discover his passion, those adventures would not have been possible.

He also encourages those looking for a career in science to be active in the scientific community and also to pay attention to your surroundings – to be observant. These are important qualities for aspiring biologists if for no other benefit than to reveal hidden enthusiasm for a subject that may not be so obvious. It also is a chance to improve environmental conditions right in your backyard.

Are you a born biologist? 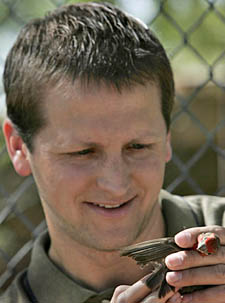 McGraw tells aspiring biologists to start looking for things that interest them early on in their education. There are programs available to young students that can help open doors and cater their education to their favorite animals, places, or subjects.

He's worked with middle school and high school students and says there's a place for everyone who's curious about science and wants to learn. There are simple ways to grow as a biologist. "Even at a middle-school age, it's not too early to start trying to connect with science and refine your interest if that's really what makes you passionate."

He says it's important for kids (and adults!) to realize that they're naturally scientists and are most likely doing science already. Deciding what clothes to wear in the morning, trouble-shooting how to fix an iPod or Wii that’s not working -- all of these things can solved using the scientific method.

"Every day, without knowing it, kids are making observations about the world around them, forming hypotheses about how they think it works, testing these hypotheses by trying a few possibilities, and then evaluating the hypotheses based on what worked and what didn’t," he said. "Science isn't scary. You can be a scientist, even as a seventh grader."

Even if it's not a "hard" science like biology, chemistry, or physics, there are skills and bits of knowledge that kids can pick up on, which may pay off later in life, should students decide on a more science-based path for their education or careers.

How can you start your career?

There are school and community youth programs and camps in place for budding science students, and he urges kids who think they might be interested to follow these opportunities and make the most of them. Camp Audubon, for example, is a great local summer experience for kids interested in nature. There are also ASU's summer enrichment programs where young students can get a taste of science in the laboratory and in the field.

The most important thing for young students to do is to be observant and curious, he says. Watching the natural world around you and asking questions about what is seen are great first steps to becoming a scientist.

In McGraw’s case, he began college with a general interest in environmental science, so he took related classes in his beginning years at St. Lawrence University in northern New York. He was drawn into the world of ornithology through a mentor, and this interest was confirmed during a trip to Costa Rica as part of a tropical ecology course in which he was enrolled.

His passion continued to grow as he discovered more and more about the feathered world. He began taking in-depth biology classes and continued reading as much about birds and evolution as he could find. In time, a particular area of interest emerged - color. Patterns of color and how those patterns related to a species’ behavior and survival became his focus.

He found that the more classes he took, the more interested he became in birds and biology. As his teachers fed his appetite for knowledge, his idea about the type of career that might fit his passion became clear. Soon he was getting his Master’s degree in Zoology that was followed with by a PhD from Cornell in Neurobiology and Behavior.

But if he hadn’t have taken the classes and went on that trip to Costa Rica, there’s no telling when he would have awakened his passion. That’s why he says it’s so important to start early. 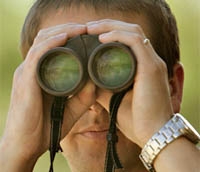 Kevin McGraw is always on the lookout for new birds.