Not too many thirteen-year-olds get the opportunity to spend their free time biking to the nearest pond to gather samples to study under their microscope. Luckily for her students, Susanne Neuer was one of the lucky ones. It was her passion for learning what was in that pond that started her on the road to become a marine biologist.

Neuer took her childhood passion and headed to college where she began to plot her scientific career path. At first there were classes in Heidelberg and later more studies at the University of Kiel in Northern Germany. At Kiel her studies of the underwater organisms took on a new life.

"Back then it was the only opportunity to take any marine classes, and that's what I did. I took classes there in biology with emphasis on marine biology. And I took physical oceanography as an extra class."

She graduated in the spring of 1986, and then made the choice to make the move to the United States where she felt she could really advance in her studies. "I realized that the U.S. was really where things were happening in terms of marine science."

She applied for, and was awarded, a Fulbright fellowship and moved to Washington State where she studied at the University of Washington. There, she enrolled in the Biological Oceanography Master's Program. Later she then moved to Oregon and attended the college of Ocean and Atmospheric Sciences at Oregon State University to earn her PhD.

After that, Neuer, along with her husband Ferran Garcia-Pichel, a fellow microbiologist whom she met while at an orientation for the Fulbright fellowship, and their newborn daughter, Marlene, moved back to Europe to be closer to family. 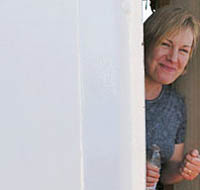 Back in Germany, the University of Bremen offered her a job as a geoscientist. For six years this was her base of research until her husband was offered a job at Arizona State University and she was offered a research faculty position. A merger of several traditional biology departments into the School of Life Sciences soon lead to a new faculty position and new laboratory.

Even though there have been many events and adventures for Neuer, her average day is not unlike those she had envisioned as you young girl. She is still exploring what lies beneath the water’s surface. Learning what organisms are waiting to be discovered and to tell their story.