Amplitude: the loudness of a sound. The larger amplitude, the larger the sound.

Pure tone: a sound represented by a single sine wave with a specific frequency.

Sine wave: a mathematical curve that goes up and down periodically.

You and your friend are sitting next to each other, sharing ear buds to listen to music. You hear a new song come on and he suddenly starts drawing a picture, following along with the music. As you watch him, you can see how his movements change with the loudness or pace of the music. 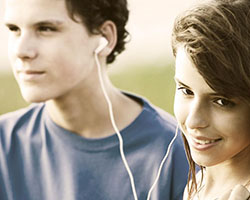 When you break down music to its basic elements, it forms a series of sound waves. Image by SCA Svenska Cellulosa Aktiebolaget.

Though this is just a simple example of drawing to music, sound waves can actually be broken down into a simple picture, usually in the form of a sine wave. If you watch your friend drawing, you can see him drawing a curved line going up and then down repeatedly, across the page. This is what a sine wave looks like.

Sine waves represent what is called a pure tone. Pure tones are the most basic unit of sound. Have you ever taken a hearing test at school and you had to raise your hand when you hear the beeps? Those beeps are the pure tones.

Each different sound you heard in your hearing test was likely in a different pitch. This is called frequency. Frequency is the amount of cycles of a wave per second. The unit of frequency is called Hertz. When the frequency is higher, and more waves fit into the same space, the pitch sounds higher, like a bird chirping. When the frequency is lower, and fewer waves fit into the same space, the pitch is lower, like a drum. You can take sounds of different frequencies and combine them to make more complex sounds. This is what happens when you talk or when you make music. Talking and music are most often combinations of lots of individual frequencies, or pitches.

Sound waves can be described by the number of waves per second and the size of the waves. Click for more detail.

Noise is a little different. Some people define noise as anything the listener does not want to hear. Scientists define noise as a random combination of all of the components of sound that does not have any pattern or repeating features. Any one sound has the potential to be in that noise at any period of time. 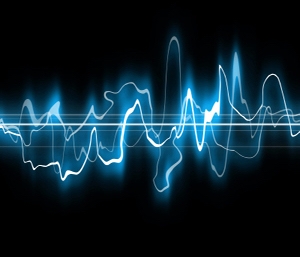 A representation of sound waves.