Cochlea: the snail-shaped organ inside the temporal bone of the skull that enables hearing and balance. 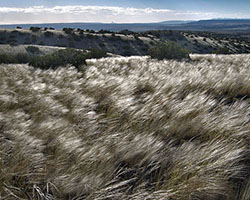 You may only notice that the air is made of matter when it is windy outside. Image by John Fowler from Placitas, NM.

As you hike across a grassy field, the wind picks up and pushes against you. When you walk down the street, a bus passes by, blowing air and dust into your face. In the air all around you are small floating particles called air molecules. We only really notice these when the air moves enough for it to feel windy or breezy, but air molecules move all the time.

Usually air molecules create quiet sounds and small movements that we cannot hear or feel. But when something creates a strong enough vibration, like when someone claps their hands or when your vocal chords move when you talk, the air molecules get pushed into each other. This causes a wave of sound to travel through the air. Once those air molecules reach your ear, the movement of air causes a series of changes that result in you hearing a sound. So what changes take place that turn a sound wave into something you understand?

Before we discuss how the ear works, we need to know some basic ear anatomy. Your ear has three sections: outer, middle, and inner. The outer ear is made up of your ear canal and ends at your eardrum, the tympanic membrane. Behind the tympanic membrane is your middle ear. 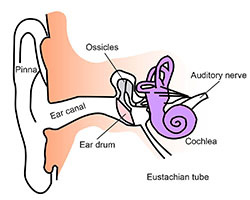 Drawing of the outer, middle, and inner ear. Click to enlarge.

The middle ear is named very appropriately, as it connects the outer ear to the inner ear. Three bones form this connection and they are called ossicles. The three ossicles are the malleus, incus, and stapes. The ossicles together are smaller than a dime.

The last section of the ear is called the inner ear. This section is made up of the cochlea (pronounced coke-lee-ah). A cochlea looks just like a snail shell and is filled with fluid and nerves that send the sounds to your brain.

Bring in the Sound

Now, let’s get back to those air molecules. When the air molecules reach your ear, they travel through your ear canal until they bump into your eardrum. 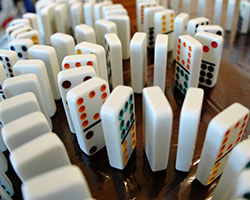 The movement of sound waves can be thought of in a similar way to the game pieces of Dominoes. Click for more detail.

Have you ever played with dominoes? You line them all up and push against the first one. This domino falls into the next one, making it fall into the next one, and so on. Sound works the same way. Every time sound hits something, it makes something else move. This is how sound moves down the pathway to get to your brain.

The air molecules moving through your ear canal cause the eardrum to move back and forth. The middle ear bones are connected to your eardrum and start moving back and forth too.

It's almost like sea grass being moved by the current. When fluid pushes on the hair cells, they are activated and send a neural signal to the auditory nerve. Signals travel through this nerve to your brain so that you can understand the message.

If all our hearing is caused by the movement of these connected parts, how is it that we can hear different sounds, from a tiny mosquito buzzing near your ear to the low blow horn of a ship? Well, the eardrum moves at different speeds depending on the sound. 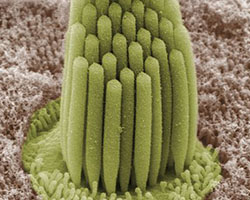 Hair cells in the ear are connected to the hearing nerve. Click for more detail.

Emily Venskytis. "How Do We Hear?". ASU - Ask A Biologist. 02 February, 2016. https://askabiologist.asu.edu/explore/how-do-we-hear 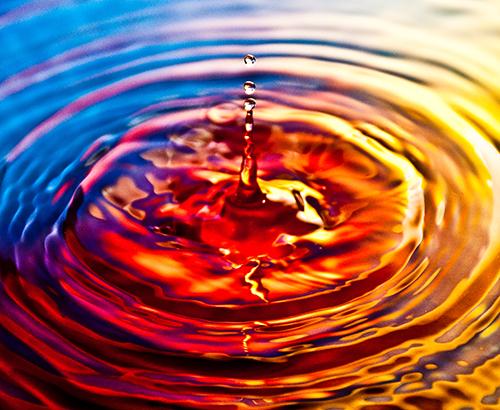