Implantation: the process in which an embryo attaches to the wall of the uterus, after which the female is considered to be pregnant......more

Menstrual Cycle: a monthly cycle that happens inside the female body. During the menstrual cycle, changing amounts of hormones result in changes in the ovaries and the tissue lining of the uterus. This prepares the body for possible pregnancy. 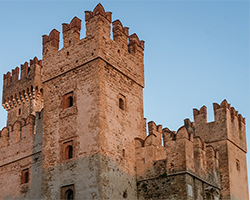 Guards protect the castle, much like an IUD protects the uterus. The hormones or copper of an IUD help defend against unwanted visitors. They also invite the help of white blood cells for additional defense. Image by Marco Ober via Wikimedia Commons.

“The queen does not wish to meet with you at this time,” says the royal guard, “Please leave.”

The soldiers insist on entering her chamber. The soldiers find the queen’s whole army is already waiting for them inside. Her army attacks any unfamiliar visitors to protect the castle.

Like an army lying in wait, an Intrauterine Device, or IUD, sits in the uterus to prevent a sperm from fertilizing an egg.

So, what exactly is an IUD? An IUD is a form of contraception that works in the female reproductive system. 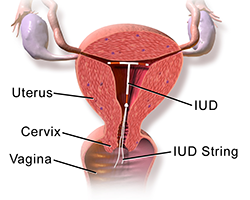 A doctor can insert an IUD through the vaginal canal into the cervix, which is the opening of the uterus. It stays put in the uterus with strings hanging down for removal. Image by Blausen.com staff via Wikimedia Commons.

An IUD is a type of device called a contraceptive, meaning it is used to prevent pregnancy. IUDs work around ninety-nine percent of the time as a method of contraception.

Another name for contraception is birth control. Some other forms of birth control for females include pills, patches, and vaginal rings. Some people prefer IUDs to other kinds of birth control because all someone needs for an IUD to work is for a healthcare professional to insert it properly. That might be a lot easier for some people than having to remember to take pills every day.

IUDs do a lot, but they are actually very small! An IUD is a capital T-shaped piece of plastic that can fit in the palm of your hand. A healthcare professional must insert an IUD into the uterus through the vagina. Some people have pain and bleeding during and after the insertion of the IUD. A healthcare professional can also easily remove the device at any time. There are two types of IUDs, and they each use a unique method to prevent pregnancy. 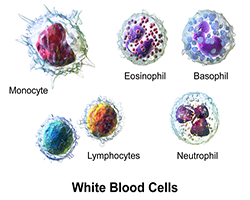 There are many types of white blood cells. Like guards in an army, different cells have unique jobs in the immune system. Our immune systems work to get rid of any unfamiliar particles in the body. When someone gets an IUD, the white blood cells attack. Image by Bruce Blaus via Wikimedia Commons.

IUDs are either made of copper (non-hormonal) or plastic with hormones. They work in different ways, but they do have similarities. One way that both types of IUDs prevent fertilization of an egg is by irritating the uterus. 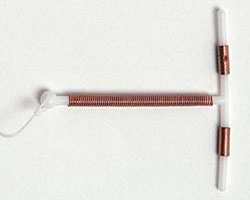 Here is what a modern copper IUD looks like. Notice the plastic “T” with copper wire wrapped around. Image by LeiaWonder via Wikimedia Commons.

Copper IUDs have some effects that hormonal IUDs do not. The copper in the IUD also creates an unwelcoming environment for the sperm cells. Copper makes it harder for sperm to move throughout the uterus to eventually meet the egg in the fallopian tube. Even if a sperm did manage to fertilize an egg, scientists say that an embryo would likely not be able to survive in the uterus or implant on its walls. 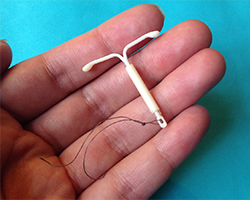 Here is the hormonal IUD. It is made of plastic with a reservoir to store its hormones. Image by Sarahmirk via Wikimedia Commons.

The hormonal IUD uses a kind of hormone called a progestin. Progestins are forms of the hormone progesterone that scientists make in a lab. The body naturally makes progesterone, which is a hormone that plays a role in pregnancy and the menstrual cycle. Progesterone stops ovulation, or the release of an egg from the ovary. So, without an egg, there can be no fertilization by the sperm. The progestin from the hormonal IUD stops ovulation in users. It also thickens the mucus that the sperm must travel through to reach the egg, making the sperms’ journey much harder. 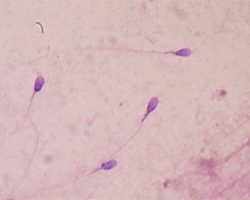 These are sperm cells under a microscope stained purple. They have a head and a long tail that they use to move to find an egg. They must travel through the cervix to the uterus, and into one of the fallopian tubes to meet an egg. An IUD can cause the body to make a thick mucus, which is a fluid in the cervix. This thick fluid makes it difficult for sperm to move. Image by Bobjgalindo via Wikimedia Commons.

Early IUDs looked different from the T-shaped ones we have now. A German physician, Richard Richter, developed one of the first IUDs in 1909. This device was circular and consisted of silkworm gut and a thin plastic called celluloid, and it worked!

In 1929, German doctor Ernst Gräfenberg created another IUD that was similarly shaped, but was made of silver wire and silk thread. This IUD worked, but modern scientists think that it was because the wire was actually made up of twenty-six percent copper. Early IUDs were often made mostly of metal, which did not fit well in the uterus. When inserted, they caused pain or small cuts that could become infected. While modern IUDs can still cause pain to patients, they are much safer now with the addition of smooth plastic.

Coming up with Copper 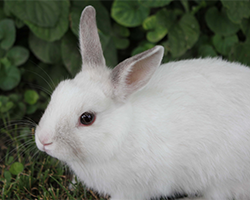 Rabbits are mammals, and their reproductive systems are fairly similar to humans’. Scientists often do tests on other animals to try to understand people’s bodies better. Image by Marko Milivojevic via Pixnio.

You may be wondering about how scientists decided to use copper in IUDs. In 1967, a researcher named Howard Tatum designed a T-shaped plastic IUD. The idea behind the capital T shape is that it fits the shape of the uterus better and as a result can decrease pain and bleeding from the IUD. The plastic T was not an effective birth control until one of Tatum’s partners, Jamie Zipper, added copper to the device in 1968.

Zipper found in his research that when copper was present in the reproductive systems of rabbits, it reduced pregnancy. Together, Tatum and Zipper created an IUD that was plastic and T-shaped and also had copper wire coiled around the vertical part of the T. They called this device the Copper T 200, and it could prevent pregnancy for three years.

The copper IUD was quite popular in the 1970s, but it caused side effects of heavy bleeding and painful cramping. In 1976, Finnish doctor Jouri Valter Tapani Luukkainen designed a T-shaped plastic IUD like that of Tatum and Zipper. Instead of copper wire, he used a hormone called a progestin in the arms of the T. Luukkainen noted that the painful side effects were decreased with his new model. The hormone was released slowly over time, making it effective as a birth control for three to five years after it was inserted.

As of 2022, both the copper and hormonal IUDs are common forms of birth control in the United States. Now, hormonal IUDs are still effective for about three to five years, but some copper IUDs can work for up to ten years or even longer.

This Embryo Tale was edited by Cole Nichols and is based on the following Embryo Project Articles: 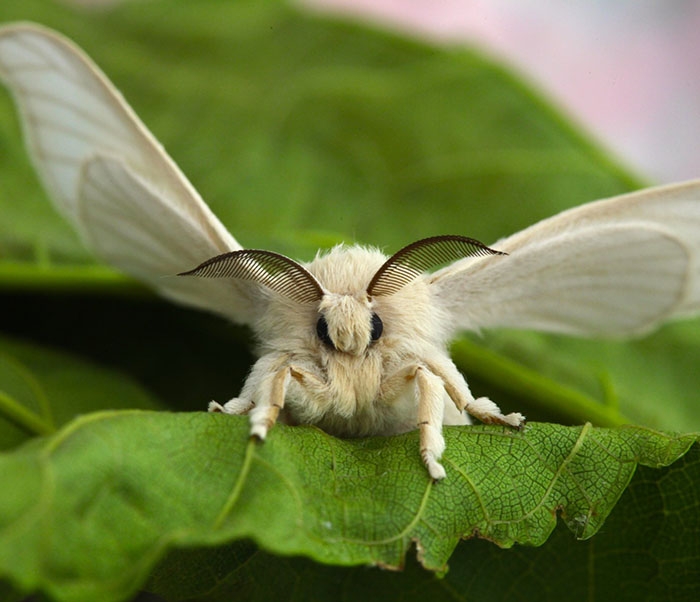 This fuzzy friend is a silkworm moth. In its larval stage, it makes fibers that humans have used to make silk for thousands of years. Silk fibers have been quite important to the medical field. They have been used for sutures in surgery, and even to make one of the first IUDs!