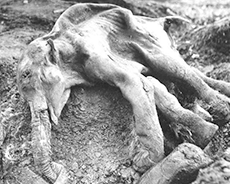 Woolly Mammoths died out around 4000 years ago. We can’t find remains of most animals that died so long ago. But, we can still find the remains of mammoths that were frozen in ice. That’s because ice has the special power to preserve living material. Image by A.V. Lozhkin via Wikimedia Commons.

You are walking through the arctic tundra, the frozen ground crunching below your feet, when you spot something poking out of the ground in front of you. It’s smooth and rounded with a pointy end. Could it be… a tusk?

Scientists, hunters, and even young children have found the remains of woolly mammoths this way. But wait—woolly mammoths went extinct tens of thousands of years ago. How could someone find their remains? Well, the ice preserved them.

Ice has the incredible ability to preserve material from living organisms for long periods of time, even thousands of years. Scientists freeze material like cells, sperm, and embryos to preserve them. This is called cryopreservation.

But, ice can also be fatal—after all, organisms can freeze to death. That means scientists have to be very careful when cryopreserving cells. They have to freeze the cells in a way that will preserve them but not kill them. 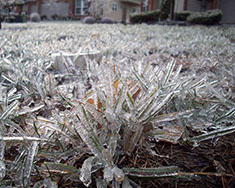 Living things frozen in ice can be preserved if they are frozen carefully. The grass in this picture has frozen solid, but the grass is still intact inside the ice. Image by Murali Narayanan via Wikimedia Commons.

When scientists freeze cells, they often want to be able to thaw the cells later to use them for research or medicine. To do this, they need to make sure not to kill the cells when they freeze them.

But why does freezing sometimes kill cells?

Imagine an icicle forming inside a balloon. As the icicle grows, it will puncture the balloon and pop it. Now instead of a balloon, imagine it’s a cell’s membrane, or outer layer. If ice forms inside a cell, it can puncture the membrane like the balloon. Then when the cell is thawed, the membrane has a big hole in it and is destroyed. Without a working membrane to protect it, the cell dies.

So if freezing is dangerous, how can scientists freeze cells without killing them? 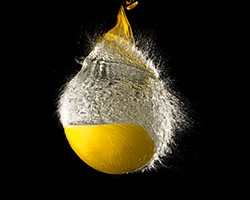 A cell’s membrane holds everything inside of a cell in one place and keeps it protected, like a balloon full of water. If freezing goes wrong, it can rupture the cell’s membrane, like popping a water balloon. Image by matthew culley via Flickr.

By cooling slowly—but not too slowly—only the solution in the test tube freezes. The cells will just get cold enough so all the activity inside them stops. That’s because when molecules get cold, they move less. So, instead of killing the cell, doing this only “pauses” the cells’ activity until they are thawed. That way, scientists can use cryopreserved cells years into the future. The cells are preserved indefinitely. 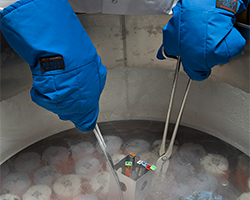 This scientist is carefully freezing samples to preserve them. If everything goes correctly, the scientist can study the samples again later. Image by USDA Gene Bank via Wikimedia Commons.

Many species are going extinct right now, so scientists are rushing to cryopreserve the DNA of those species before we lose them. Doing so will let us continue studying those species’ genetics in the future. But scientists might go even further. Remember the woolly mammoths preserved in ice? Well, some scientists want to use the DNA in those mammoth’s cells to recreate them in a process called de-extinction. Scientists are still far from accomplishing this, but some claim they will in the next fifty years. 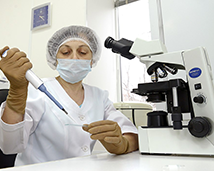 This scientist is preserving an egg cell for IVF. In vitro means that the sample is in a test tube. The goal of IVF is to simulate fertilization that normally happens inside the body, but in a test tube. Image by Galina Fomina via Wikimedia Commons.

We don’t only cryopreserve cells from other animals. Doctors often cryopreserve human eggs, sperm, and embryos, too.

Many people freeze their eggs or sperm while they are young and those cells are the healthiest. Then when they are older and ready to have children, doctors can use the cryopreserved cells to create an embryo outside of a person’s body through a process called in-vitro fertilization, or IVF. Later, they can implant the embryo into a person’s body so they might become pregnant and eventually have a child. Those frozen cells make this possible.

That practice is common for people being treated for cancer. Cancer treatments that use radiation can harm their egg or sperm cells, and possibly make patients infertile. Cryopreservation and IVF help give more people a chance to have healthy children.

In 1947, Christopher Polge, Audrey Ursula Smith, and Alan Sterling Parkes were working to figure out how to cryopreserve sperm cells at their lab in London. Almost no one had succeeded at this before them. But they suspected that putting cryoprotectants into the solution they froze cells in would help protect the cells from freezing.

Cryoprotectants are chemicals that help protect cells while they are frozen. Without cryoprotectants, water in the surrounding solution forms a solid block of ice, freezing cells with it. Putting cryoprotectants into the solution breaks up forming ice, leaving more room for cells between the ice. That helps keep the cells from freezing solid. The only problem Polge and his colleagues had was that they weren’t sure which chemicals would work as cryoprotectants.

This is a molecule of glycerol. Glycerol is a chemical that scientists can use to preserve cells. But did you know that it also helps preserve food? Sometimes, we even use it as a sweetener instead of sugar. Image by Benjah-bmm27 via Wikimedia Commons.

Based on their previous work, Polge, Smith, and Parkes suspected that a sugar called fructose would be an effective cryoprotectant. But one day when Polge was mixing a solution to freeze cells in, he made a big mistake. Instead of fructose, Polge accidentally grabbed a bottle with a different chemical in it called glycerol.

Oh no. That must’ve ruined everything, right?

Amazingly, no. When the researchers froze the sperm cells, the ones in glycerol were best preserved. Turns out, the glycerol did a better job of protecting cells than fructose. Once the researchers realized they were using glycerol, they performed more tests. Those tests confirmed that glycerol worked as a cryoprotectant, which researchers still use today. 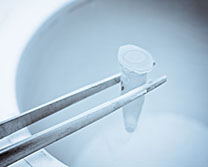 In IVF, the sperm and egg cells are cryopreserved in test tubes like this one. Image by SovezdieL via Wikimedia Commons.

In 1971, a researcher from England named David Whittingham published a paper with huge news: he claimed that he had successfully cryopreserved mouse embryos. He was one of the first people to cryopreserve any mammalian embryos. Curious about how Whittingham did this, two cryopreservation researchers named Peter Mazur and Stanley Leibo invited Whittingham to their laboratory in Oak Ridge, Tennessee. They wanted Whittingham to replicate his experiment. But for some reason, he couldn’t do it.

Instead of laughing at him, Mazur and Leibo decided to help. The three of them worked together to develop a reliable method of cryopreserving the mouse embryos. Their experiments culminated in one of the first successful births of a mammal using cryopreserved embryos in 1972. That work paved the way for future scientists to learn to cryopreserve human embryos.

Thanks to the work of researchers like these, cryopreservation helps people in many fields of science today.

Image of Ötzi the Iceman by OetziTheIceman via Flickr.

This Embryo Tale was edited by Dina Ziganshina Lienhard and is based on the following Embryo Project articles: 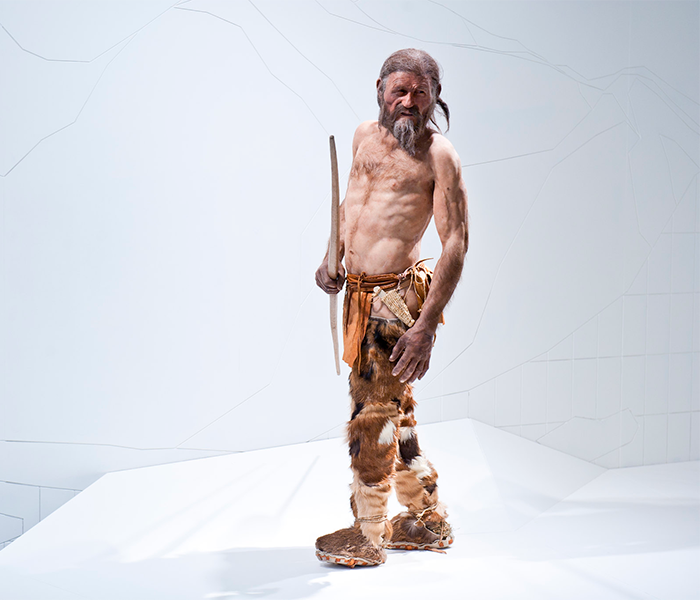 Ice can preserve whole human bodies. Here is a sculpture of a man who lived over 5,000 years ago. The people who found him gave him the name Ötzi because they found him in the Ötztal Mountains in Italy. We can get a good idea of what he looked like because the ice kept his body in good condition.