Getting to Know the Germ Layers

Gastrulation: the process in an embryo’s development that separates cells into layers.

You crack an egg into a bowl and look closely at the golden yolk and the clear gel around it. You notice a tiny white spot within the yolk – that means that a sperm has fertilized this egg, and it could grow into a baby chicken. But what happens to a fertilized egg that makes it turn into an entire animal? 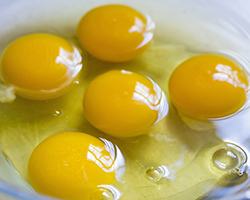 Each of these chicken eggs is one single cell.

The egg you are inspecting is actually one big cell. For a fertilized egg to become a whole organism, that cell must divide to create more cells. Those cells then have to differentiate so they know what function they need to perform in the body.

Cells differentiate based on where they will end up in the body. For example, a cell that is going to be part of a lung has to perform a different function than a cell that will be part of the stomach.

But before cells can differentiate, the embryo must go through a process called gastrulation. During gastrulation, an embryo’s cells split into separate layers called germ layers. All animal embryos, except sponges, develop two or three germ layers. The germ layers will give rise to every tissue and organ in the body.

Imagine you are looking inside a fertilized egg as it develops. The egg yolk, made of a hollow ball of cells, begins dividing–that means gastrulation is starting. You see the cells split up into two spheres, one within the other, like a balloon inside a bigger balloon. The inner sphere, or germ layer, is called the endoderm, and the outer germ layer is called the ectoderm.

Gastrulation is when the first hollow ball of cells formed during development folds in to form a second sphere. The outer sphere is the ectoderm and the inner sphere is the mesoderm.

Embryos of complex organisms, like humans, form three germ layers. In human embryos, the endoderm and ectoderm interact to form a third germ layer between them. That layer is called the mesoderm. Let’s take a closer look at each layer and the body parts they will form. 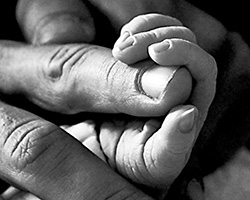 Our skin, nails, and hair come from the outer layer of the embryo, called the ectoderm. Image by Daniel Nebreda via Pixabay.

The mesoderm forms the embryo’s heart, most muscles, bone, and connective tissue, which gives structure to organs in the body. Animals that have a mesoderm get internal organs. For example, stomachs and intestines. But many organisms do not have a mesoderm and don’t form the internal organs that we do. Organisms without a mesoderm, like jellyfish, are less complex and don’t need organs like brains or hearts to function.

The endoderm is the innermost germ layer. This layer of cells forms a type of tissue called the epithelium. It lines many internal organs, like the digestive tract, liver, pancreas, and lungs. The epithelium will cover and protect those organs like a thin suit of armor. 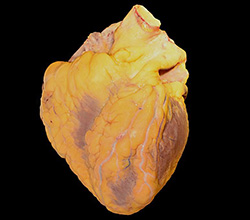 At the end of gastrulation, tissues and organs can begin to form. Most organs, including the heart, are made up of several different types of tissue, often from different germ layers. Image by Jebulon via Wikimedia Commons.

After the germ layers separate in gastrulation, cells begin to take on their unique jobs in the organism. As this happens, cells in each germ layer start to group together to form tissues. Then, similar tissues group together to make whole organs, like muscles, bones, hair, or even your heart. Organs can have several tissue types with different cells. For example, the heart has both muscle and connective tissue.

Our cells do a lot of different jobs to keep us alive. Without differentiation, our cells would not know what their jobs were. If all of our cells were doing the same thing, we wouldn’t have separate body parts at all! It’s pretty amazing how all of those body parts can come from one little egg.

He slices through the egg shell, creating a small hole through which he can see the egg yolk. Taking another egg shell, he carefully trims the egg down until he has created a perfectly sized patch for the hole he just made. When he wants to look inside, he opens the patch. Otherwise, he leaves it closed, so the egg doesn’t lose too much water. 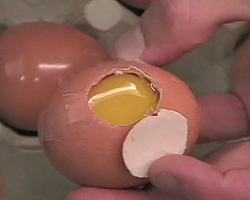 Here is an example of "egg windowing," where you cut a hole in a fertilized egg. The hole lets you watch stages of development when open, but can be covered to protect the egg.

With this method, young scientist Christian Heinrich Pander was able to look inside of a chicken egg as it developed over two weeks. Pander looked at the developing egg in 1817 while he was a doctoral student at the University of Würzburg in Germany. What he saw in the egg changed our understanding of development: he discovered the germ layers.

Pander’s discovery sparked hundreds of years of research. By the 1860s, scientists began comparing germ layers in various animal embryos. In doing so, scientists came up with germ layer theory, the idea that germ layers always developed into the same set of organs in every species.

Does this theory sound right to you? Not all scientists agreed with the idea.

In the late 1870s, brothers Oscar and Richard Hertwig argued that germ layers could grow into more structures than other scientists thought. They spent three years publishing evidence of this, showing that germ layer theory wasn’t right after all.

In 1901, Charles Sedgwick Minot, a professor at Harvard, also thought of a theory that changed how we see cells.

Minot predicted that moving cells from one germ layer to another would make the cells change to become like the other cells in their new germ layer. But, Minot never tested his theory. 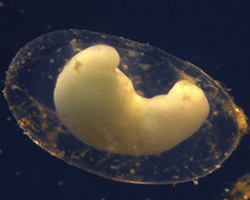 A northern crested newt embryo, like the one used by Hilde Proescholdt Mangold. Newt embryos were used to show that early on, cells from one germ layer can be moved to (and still function in) a different germ layer.

Luckily, in 1924, Hilde Proescholdt Mangold from Freiburg, Germany, did an experiment that supported Minot’s theory. Mangold moved cells from the ectoderm layer of a newt embryo to a different germ layer on a second newt embryo.

The Jobs of Germ Layers

Can you guess what happened? The cells took on their new role in the second embryo as if it was where they had started. That experiment showed that the jobs of germ layer cells can change, and are not fixed at the start of development.

Scientists still study germ layers today. Many hope that knowing how organisms develop will help us treat diseases. Who knows, maybe the cells that help us start our lives could help save them, too.

This Embryo Tale was edited by Dina Ziganshina and Emily Santora and it is based on the following Embryo Project articles: 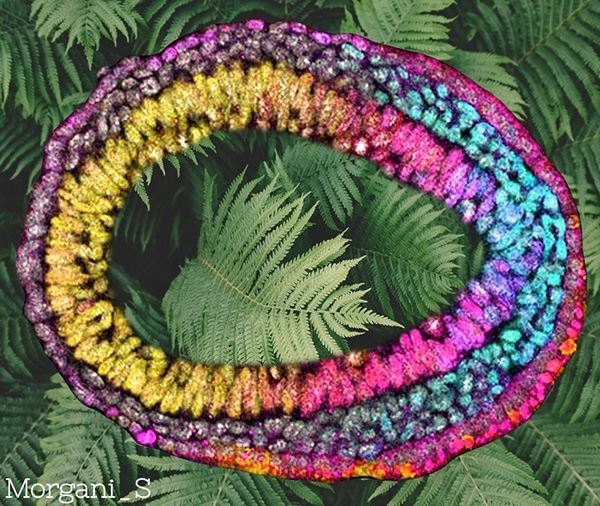 Mouse of Paradise is an art piece by Sophie Morgani that shows part of a mouse embryo that is seven and a half days old. The embryo is undergoing gastrulation. The image is overlaid on a photograph of ferns. Can you spot three different layers of tissue in the mouse embryo?
Germ Layers
Learn how to read a scientific article