Conjoined twins: twins whose bodies are joined during pregnancy and remain that way after birth......more

Heredity: the transmission of genetic characteristics (traits) from parents to their offspring during the reproductive process. Eye color is an example of a trait that is inherited by children from their parents.

Identical twins: this can happen if a fertilized egg (an egg that has already joined with sperm) splits into two separate cells that will each turn into a separate living plant or animal. Because they started from the same fertilized cell, every gene is the same in the DNA of both twins... more 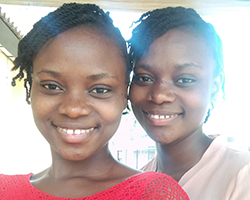 These two twin girls are identical, or monozygotic, twins. The prefix “mono-” means “one.” Twins are named as such because they arise from one zygote. Even though these twins share mostly the same DNA, they tend to look a little different from each other because they have different lives. Image by Favourdare123 via Wikimedia Commons.

You are starting at a new middle school today. You take your seat and nervously look around the room. You don’t know anyone here – you left all your friends back home! As your new classmates trickle through the door, two girls step into the classroom. They look exactly the same.

Are you seeing double? You rub your eyes and look again. Nope, there are two girls. And they still look the same. How is that possible?

One of the girls makes a beeline for the corner of the room and plops down on a seat, staying quiet. Then, someone taps you on the shoulder. You turn around to see the other girl. She introduces herself as Jennah, and you two make fast friends.

Those two girls are an example of what are called identical twins. Twins are siblings who develop in the same womb at the same time. Although some twins can look pretty similar, they are not truly identical in all ways. For example, Jennah and Sana have their own personalities. Jennah is outgoing, and Sana is quiet. And as you start to spend more time with twins, you notice they look a little different, too. Jennah’s eyes are bigger, and Sana’s fingers are smaller. 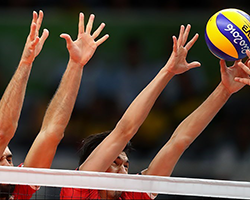 Sometimes, parts of your body will change in response to your environment. For example, volleyball players will often have thicker fingers and harder palms than those who do not play the sport. This is because these thicker fingers and palms develop over time as they build strength in their hands. Image by Mohammad Hassansadeh via Wikimedia Commons.

If Jennah and Sana are so different, why do they look identical? Let’s learn more about what it means to be a twin and how twins develop.

Women usually give birth to just one infant. But sometimes, they give birth to more than one. If a woman gives birth to two infants at the same time, they are twins.

There are two main types of twins. One is identical twins, like Jennah and Sana, and the other is fraternal twins. Let’s learn more about each type. 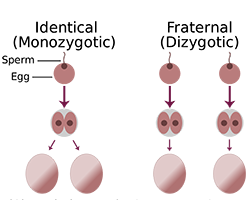 Identical twins originate from a single fertilized egg. That egg usually splits in two in the first week of pregnancy and goes on to become two twins with identical DNA. Fraternal twins have different sets of DNA. That’s because they come from separate eggs that were fertilized by separate sperm. Image by Trlkly via Wikimedia Commons.

Just like the two girls in your class, identical twins share similar features. They usually are about the same weight and height, and have similar hair color. But identical twins can differ, too. They each have unique fingerprints, though they are still fairly similar. Most of all, they can have really different personalities – just like Jennah and Sana! 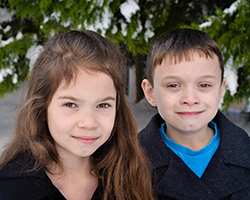 Fraternal twins tend to look fairly different from each other. They develop when two different egg cells each fuse with a different sperm. This results in two embryos that each have their own unique set of DNA. That is why fraternal twins look like siblings, rather than copies of each other.

They can also be different sexes. This means that a mother who is pregnant with fraternal twins can have one male and one female baby, or two females, or two males.

Twins are more likely to face birth complications than infants born on their own. The most common complication is premature (or early) birth. When fetuses are born prematurely, parts of their bodies may not be as developed as they could be at birth. They might have issues breathing because of underdeveloped lungs or trouble gaining weight, for example. Around half of twins are born prematurely.

Rarer complications can also occur as twins develop. In 0.00002% of all births, twins are born physically joined together. This condition is known as conjoined twins. The extent to which conjoined twins are attached varies, but most commonly, they are connected at the chest, stomach, or pelvis. 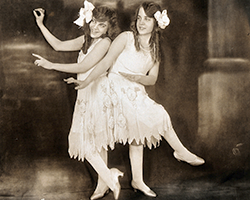 Why does this phenomenon occur? Sometimes during pregnancy, one embryo partially splits into two embryos. However, it fails to split all the way, so the embryos grow while physically connected. The result of this is identical twins who are physically stuck to each other.

The chances of conjoined twins living for long after birth is low. The survival rate is around 7.5% for conjoined twins who have to undergo surgery. But, this is a much better chance than before. Advances in science have helped increase twins’ chances of survival.

Three months into school, you’ve become best friends with Jennah. Sana… not so much. She doesn’t seem to be interested in making friends. 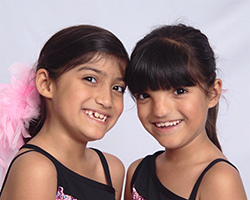 These twin girls are both dressed up for a dance performance. Twin siblings are often put in the same clothes, schools, and extracurriculars. Because they often grow up in the same place and in the same way, they share a lot of life experiences. Even then, twins will have some differences between them. Image by hdydi via Pixabay.

Even though you are now used to how different they are, it still surprises you. How can they act so different when they look the same?

Scientists have been asking the same question for years. They wanted to know if, and how much, a person’s DNA determines their personality. Identical twins are perfect to study for this question, as they have the same DNA. So, their DNA cannot be the main reason that the twins have opposing personalities.

In 1875, a scientist named Francis Galton studied twins. He wanted to find out whether heredity played a difference in how smart a person becomes. Many people at the time believed that children got their intelligence from their parents. But others argued that those parents gave their children better schooling. To look into where intelligence and other traits come from, Galton decided to study different types of twins. 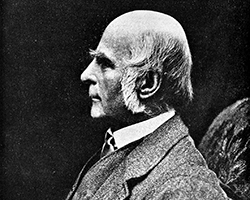 Francis Galton was a prominent scientist in the 1870s. He studied twins to test how much of who we are comes from our genes versus our environment. He also coined the term eugenics, which is the belief that only people with "superior genes" should be able to exist and have children. That unethical belief has caused lots of people harm all over the world. Image by Wellcome Collection Gallery via Wikimedia Commons.

Galton reached out to as many pairs of twins as he could find to survey them. Most of the people who responded to his survey were identical twins. When Galton wrote his paper, he listed a few major findings. The first is that identical twins looked the same to most people around them. But, to their mothers and others who knew them well, there were certain facial expressions and mannerisms that told the twins apart. This meant that personality does not entirely come from DNA.

Galton also found that identical twins who grew up with each other stayed similar after they moved apart. Identical twins often suffered from the same diseases, even though they were far apart. They shared similar ideas, and made the same sorts of decisions.

Galton also noted that fraternal twins who grew up together didn’t become more similar to each other as time passed. They shared some similarities, like siblings do. But, as they became older, they continued to grow differently.

Galton’s work showed that nature, or inheritance, has an effect on people’s personalities. This led to his belief that nature (inheritance) has a greater effect than nurture (environment).

Nature vs Nurture: Who Wins? 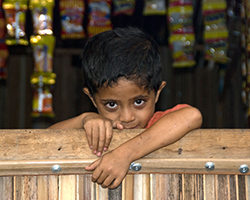 Some kids are born shy and tend to be more observant and cautious of their surroundings. Scientists conducted twin studies to see if this was because of the child’s DNA or a result of the child’s environment. The result is a bit of both – genetics can predispose you to act a certain way, but environment is what shapes you. Image by Graham Crumb via Wikimedia Commons.

There is an ongoing debate about whether nature or nurture is the stronger force. Many studies have shown nature affects a person’s personality. But, the environment can affect the personality as well. If Jennah didn’t have anyone to talk to, she might learn to be less social. However, it’s hard to predict how she would change.

Whether nature or nurture is stronger depends on a few things. The trait in question is a big part of it. Some traits are much more heritable, like eye color, while others depend much more on environment, like weight.

Whether it’s because of nature or nurture, every person develops uniquely. No matter how identical twins might look, they are still their own person at the end of the day.

Image of Mark and Scott Kelly by NASA Johnson via Flickr.

“About Twins.” Twins Research Australia. (n.d.). Retrieved May 4, 2022, from https://www.twins.org.au/twins-and-families/about-twins. 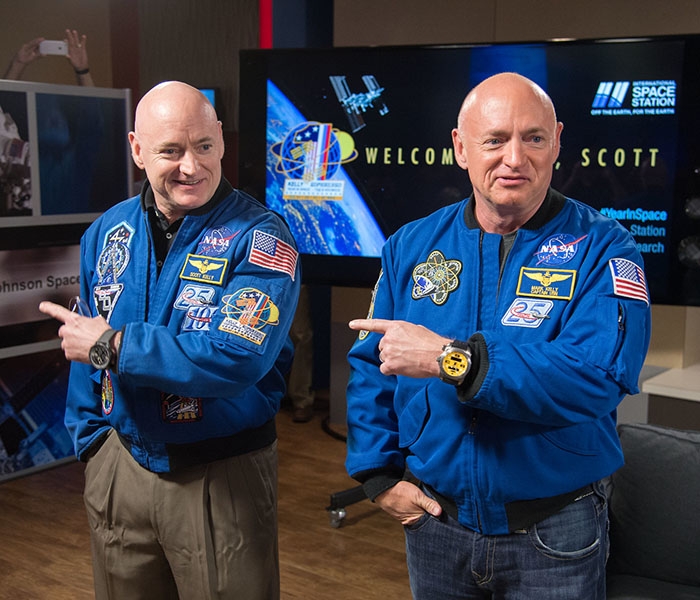 Mark and Scott Kelly are twin brothers who used to work as astronauts for NASA. Mark retired before Scott did, so NASA performed studies on the brothers. They found that the organs inside of Scott's body acted very differently in space from how Mark's organs acted on Earth.

What Are The Different Types Of Twins? | Ask A Biologist
Skip to main content