Behavioral shutdown hypothesis: the idea that an animal will only work to get a resource (like food) if the reward of getting that resource is greater than the effort (use of energy) needed to get it...more

Depression: a state of low mood that can interfere with how a person conducts their everyday activities... more 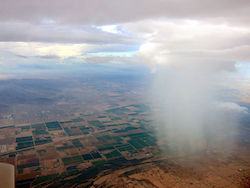 Many people living in Phoenix look forward to the storms of the late summer monsoon season. Click to enlarge.

If you visit the Sonoran Desert in summer, you’ll find that the beginning of summer is hot and dry. The sun bakes the ground for months, but near the end of summer, the monsoon season should start. Each morning, the forecast may say there’s a high chance of rain. You pull out your rain boots, waiting excitedly to go out and splash around in the puddles for relief from the heat. But as the days go by and no rain comes despite it being in the forecast, you start to lose hope that the dry summer will ever end. In your frustration, you miss the first rain of the season and your boots stay in the closet for weeks, gathering dust, even though it rains regularly.

A similar thing can happen when a person is depressed. Even if things improve for someone, their mood might not. Scientists thought that this may have to do with the person’s past experiences and how often life occurrences change between good and bad.

Whether or not we realize it, what happens in the past affects our behavior in the present. Learning from the past is important for survival. For example, humans and other animals may need to remember where water collects after a rain, where the best food sources are, or which neighbors they don’t get along with.

In the Evolution, Medicine, and Public Health article “Adaptive learning can result in a failure to profit from good conditions: implications for understanding depression,” scientists set out to explore if a person’s previous experiences may explain some symptoms of depression.

Life can be hard. There are several life events that can cause low mood, loss of appetite, or other symptoms of depression. These might include getting a bad grade on a test, getting into a fight with a friend, or losing a loved one. It is natural to feel tired, antisocial, and sad following an upsetting event. 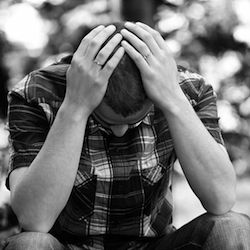 Depression may be rooted in behaviors that were useful previously under certain conditions. Image by Sander van der Wel from the Netherlands.

There could be a reason for this depressed behavior that has helped us throughout human history. When resources are not readily available, anti-social behaviors may allow us to save the time and energy we would spend looking for resources. Scientists call this the behavioral shutdown hypothesis. However, even though scientists have theorized an explanation for depression, they have not given much thought as to why depression lingers for varying amounts of time after it starts.

If we assume that a person reacts in a depressed way to a sad event, we’d also expect her or him to react in a happy way to the next positive experience. But scientists have found that a person with depression can sometimes have a very difficult time doing this.

To try to figure out whether the length of depressive behavior varies from person to person, scientists came up with a scientific model they could test. 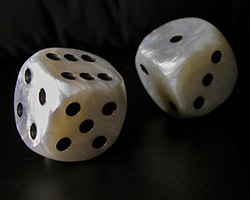 How successful you've been at a game may affect your interest in playing future games. Image by Gaz.

If you played one game and lost, you might quickly decide to play again. But if you had played a few rounds and had won almost all of them, you’d probably be more likely to play again so you can keep winning. Using similar ideas as the basis for their model, scientists tested if the number of successes before a failure changed how long an individual rested (was depressed).

The Good Times and the Bad Times 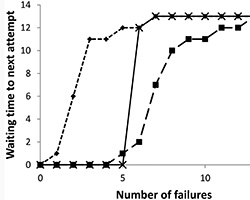 The number of successes someone has experienced can affect how long they wait between failures until they try again. Click for more detail.

If the switching rate is slow, an individual is more likely to rest longer. This is because after they experienced such a long period of success, they expect to experience an equally long period of failures. Under those expectations, they would rather rest than spend energy on an attempt to gather resources that could most likely end in failure.

Some scientists view depression as a resting period that allows humans to conserve energy when resources might be scarce. This period of depression varies from person to person. Based off of the model explained above, the length of the rest period may depend greatly on the amount of success experienced before the failure that caused the rest. So we see that what an individual has learned about the environment may affect how long they rest. When a person continues to rest during periods when the environment is good (and they had successes showing them it was good), this may be what we call depression.

Read more about: Does Past Experience Affect Depression? 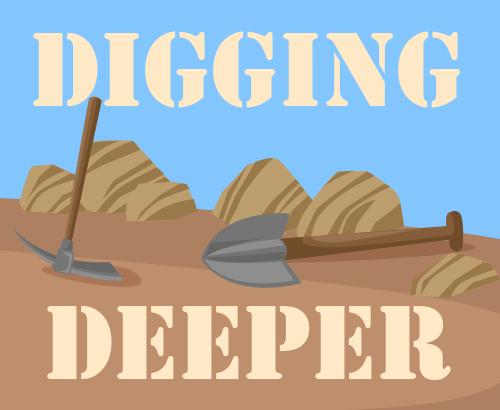 Want to explore this paper further? Visit Digging Deeper for a critique exercise.
Adaptive learning can result in a failure to profit from good conditions: implications for understanding depression
Learn how to read a scientific article