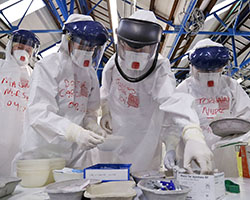 Medics practice procedures to test and deal with Ebola. Image by UK Department for International Development.

The virus enters your body through a bite you got while handling a monkey. It slips inside a host cell and hijacks the cell’s controls. The host cell suddenly begins making more and more viruses until the cell bursts open. Those new viruses then slip inside other cells, and the vicious cycle repeats.

More immune cells arrive to clean up the mess of dead cell parts. They try to clean up the viral infection as well, but the Ebola virus evades them. Eventually, the virus will infect most of the cells in your body, including the cells that make up your blood vessels. When these cells die, blood vessels become leaky. This causes internal bleeding, which can lead to multiple organ failure because the tissues in your body are not getting enough oxygen and nutrients. This is what leads to death in roughly 30 to 50% of patients infected with Ebola. Most patients start out with flu-like symptoms that worsen, and they die within the week.

How does the virus evade our immune systems so easily? Scientists compared the Ebola viruses involved in different outbreaks to learn how the virus evolves in the PLOS ONE article "New Perspectives on Ebola Virus Evolution."

How Does Ebola Invade a Host?

The deadly Ebola virus contains a single strand of genetic material called RNA. Each gene in the strand serves as a blueprint to make proteins, which embed onto the surface of the membrane. One of these is the glycoprotein gene. This gene codes for two membrane proteins: the spike glycoprotein and the secreted glycoprotein. 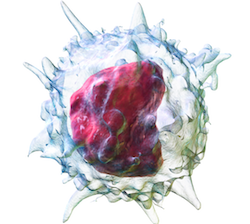 The Ebola virus invades immune cells, such as this illustrated version of a monocyte white blood cell.

Not All Animals are Equal

Since the mid-1970s, outbreaks of Ebola virus have erupted in human, chimpanzee, and gorilla populations in western African countries. However, there are long spans of time between outbreaks. During these lulls, the virus hides in reservoir species. Reservoirs are animals in which the Ebola virus can replicate enough to stay present, but not enough to make the animal sick. Scientists still do not know what the reservoir species for the Ebola virus are.

Not All Ebola Viruses are Equal 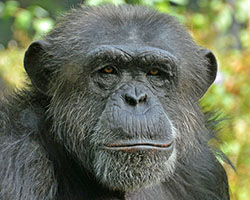 Humans are not the only species that can die from Ebola. Chimpanzees, like the one shown here, and gorillas also suffer from Ebola outbreaks. Image by Clément Bardot.

When viruses replicate, they replicate and pass on copies of their genes to their “offspring.” During copying, mistakes can result in gene mutations. For example, imagine if you copy a tricky word such as “rhythm” a thousand times. Every so often, you will most likely make a spelling mistake and “mutate” the original word by adding, deleting, or switching one or two letters.

Differences between the glycoprotein genes most likely come from these random mutations. Mutations can change the amino acids that make up the glycoprotein, which leads to a change in the protein’s shape. For proteins, the shape determines what it can do. The spike glycoprotein is broken down into parts. One part is disordered, or unstructured, because its chemical composition cannot maintain structure. The other part is structured. Scientists compared the evolution of the glycoproteins to understand how these shapes may change over time and affect the survival of the virus.

Evolution of a Virus

Factors in the virus’ environment, such has the host immune system, will determine if the mutated gene is beneficial or not. If a mutation helps the Ebola virus survive longer and replicate faster, then the virus has experienced positive selection. If the mutation weakens the virus and the virus cannot replicate, then the virus has experienced purifying selection. Usually, with purifying selection, the mutated version of the gene dies out over time. Most mutations, however, do not affect the ability of the virus to survive and replicate. In these cases, we acknowledge that the gene has still changed over time due to genetic drift. 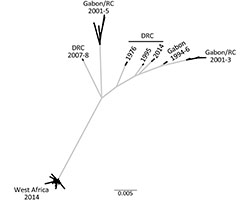 A phylogenetic tree is a way of comparing how different species are related to one another. Species that are located more closely together are more related. Click for more detail.

What’s Next for Ebola Research? 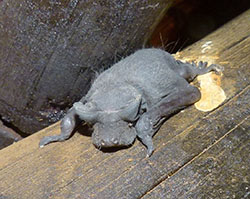 Scientists still need to identify the reservoir host for Ebola. One possibility is the Angolan free-tailed bat. Image by Bernard Dupont.

Now that we know which parts of glycoproteins are most important for virus success, we need to understand how other species can affect the evolution of those proteins. Future works should focus on finding the reservoir species of the Ebola virus. By identifying the reservoir species, scientists may be able to understand how the virus changes between outbreaks and how it jumps from a reservoir to humans. Until then, it will be very difficult to predict and prevent the next Ebola virus outbreak. 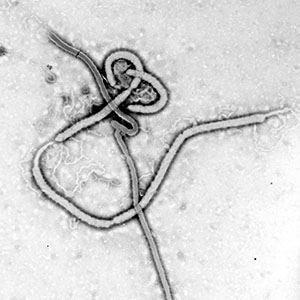 The Ebola virus seems fairly simple - a single strand of RNA - but it sneaks into cells, such as those that make up the immune system, and starts replicating. Once the infection spreads, the Ebola virus causes an often-fatal disease.