Epigenomics: the field of study that looks at changes that can happen to the genome (all the DNA) of an organism during its lifetime. 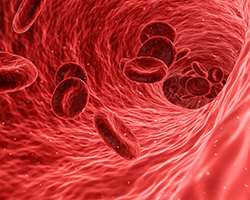 Blood can hold all kinds of information about health, diet, and disease.

Your veins and arteries are like long, twisted racetracks. They are filled with blood that holds cells, proteins, and many other things that race through you, making laps around your body. A red disc shoots through a large tube alongside trillions of others. These are red blood cells, rich with oxygen, traveling from your lungs around the body. The liquid, or serum, the red blood cell floats through is filled with proteins, hormones, minerals, other cells, and more.

Joshua LaBaer uses blood and all the things found in it to learn about disease and our bodies. He looks at the proteins, DNA, and white blood cells to track down cancer, signs of radiation, and toxins.

Many types of cells can divide to create more cells. Some cells do this 50 to 70 times, and then they die at the end of their lives. Your body acts like a conductor in this process. It tells cells when they can divide and when they should stop by sending signals to the cells. But sometimes your cells don’t listen like they are supposed to. Instead, the cells keep dividing and multiplying like weeds. This sneaky, out of control dividing causes cancer in the body.

Cancer can grow for a long time before we realize it. But there are signs—signs that we haven’t always known about or noticed before. One sign is in the proteins in blood. Cancer makes abnormal proteins – and it might be identified through those proteins. This is one of the big things that LaBaer is working on to help people get treatment faster and potentially save lives. He does this by looking at what is present in your blood and if your white blood cells are fighting an invader.

You are covered in itchy little red dots. Where did they come from and why are they making you miserable? Did you fall into some poison ivy? You don’t think so, and your friend down the street just had the same symptoms and was diagnosed with chickenpox, a virus. He came over to play the day before his symptoms started, he must have been contagious and passed it to you. 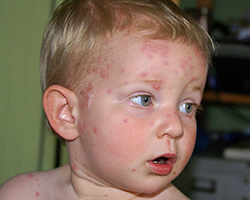 Your body recognizes viruses, like chicken pox, to fight them off. But it can also recognize abnormal cells, from cancer. Image by Phyllis Buchanan via Wikimedia Commons.

When you get the chicken pox or another virus, some of your white blood cells make antibodies to fight it off. For this to happen, the virus is first identified as an invader and marked for attack. Then your cells start the long battle against the invader. T cells jump in the fight early on, and they will fight anything in your body that they think is a threat. They do this while the body prepares for a specific attack using special cells called B cells.

Each B cell creates one kind of antibody. Antibodies are like elite fighters, each trained to destroy just one kind of invader. B cells also remember what viruses the body has fought in the past. If a virus is recognized, the B cells start making the antibodies to fight it right away. The cells that make that antibody also multiply to supply even more fighters. Then the antibodies can attach to the invaders and neutralize them. This type of specific defense is something that improves over time. The body remembers when it has fought a virus before. It has specific cells called memory B cells that  remember viruses, so it can quickly make the needed antibodies if the virus shows up again.

LaBaer and his lab have worked to create a tool to identify these antibodies to help people detect cancer earlier. They thought that if the body was fighting cancer, it would make antibodies that they could find. If they make a test for those antibodies, then they could figure out when there is cancer in someone’s body. This is like when you find bug bites after playing outside and can guess that mosquitos are out there even though you didn’t see them. The tools that he has created aren’t just for identifying cancer, though. They can also be used to identify other problems in your body.

You pump your legs, gaining more and more height on the swing. At the top of your forward swing, you jump, and for a moment you are flying! In the next moment you realize you have jumped too high, landing at a weird angle on your arm. You think you broke it. You go to the clinic, where your doctor takes several x-rays to find out what kind of break you have, and where exactly it is on your arm. While you are trying not to move due to pain, you wonder why the nurse keeps going behind a screen whenever she takes another x-ray. She does this because x-rays give off small doses of radiation every time they are used. 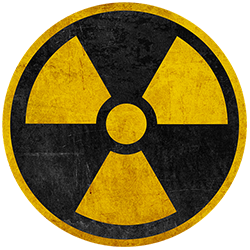 People can get too much radiation from accidents at nuclear power plants, or from nuclear bombs. The damage that happens to DNA during radiation poisoning can be detected in the body. Image by Catalania Catalino.

X-rays give off small doses of radiation, but not enough to harm you without a lot of exposure. So, an X-ray won’t hurt you, but what if someone is exposed to large amounts of radiation? High doses of radiation can create a lot of problems in your body. Someone exposed to too much radiation will feel sick to their stomach usually and might have what looks like a sunburn. Their insides would be damaged too, including the DNA in some cells. LaBaer’s group has figured out ways to detect that damaged DNA. But this type of detection doesn’t only apply to radiation. It might also work to track toxins, which are chemicals that can hurt us.

When a person is exposed to a toxin it can harm them in many different ways. One of those ways can’t even be seen: it can modify DNA and turn certain genes on or off. This can make people very sick when it happens. LaBaer and his team are working on a way to detect where DNA in a genome has been changed by toxins. This type of research is in the field of epigenomics. Epigenomics is the study of ways that genes are changed during someone’s lifetime. These changes can alter what genes do or what they make in a cell, and many of the changes can be inherited. LaBaer and his team want to use this focus to figure out how to identify what toxins a person has been exposed to and when they were exposed.

LaBaer’s work is far-ranging in its applications, but it all focuses on blood and what it can tell us. He has been tracking proteins, radiation, and toxins in blood for years. But with the recent public health crisis of COVID-19, he found another way to help… by tracking cases of COVID.

When the coronavirus pandemic hit in 2020, LaBaer saw an opportunity to help in the fight, and jumped right in. There were already tests for COVID-19 being used, but he helped develop one that didn’t require a nurse or doctor to give the test, so more tests could be done in the same amount of time. He and his researchers quickly worked to come up with an easier test that was also more comfortable (it didn’t involve shoving cotton swabs up people’s noses!). The spit test they developed requires people to spit in a tube. Their spit can then be tested for RNA (the genetic material of the virus, like the DNA that lives in your cells) from the virus that causes COVID, SARS-CoV-2. 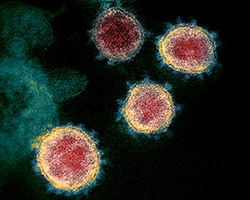 LaBaer and his colleagues developed a spit test for SARS-CoV-2. Image by NIAID via Wikimedia Commons.

LaBaer has also helped people understand this virus. He has been educating people on the coronavirus by speaking on the radio, local news, over social media, and in YouTube videos. He talks about how the virus infects people, and about the vaccines that have been made to treat it. He wants to help people understand the novel coronavirus so they can keep themselves safe.

Whether focusing his sights on toxins, cancer, or COVID, LaBaer’s work can help us track and detect disease better than before. LaBaer now runs an entire institute where researchers work on medical problems. These researchers are all dedicated and driven. They are guided by LaBaer, the director of the Biodesign Institute.

Catching Body Invaders was created in collaboration with The Biodesign Institute at ASU. 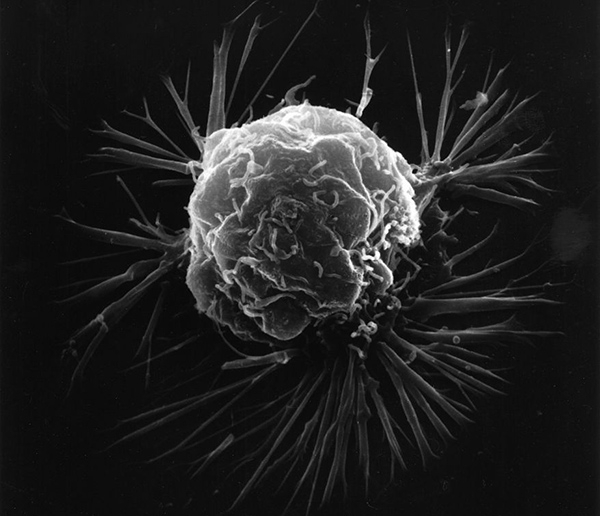 Cancer cells, like this one, can give off signals that we can use to detect them earlier than ever before. Whether fighting cancer or COVID, Josh LaBaer and his research team are at the cutting edge of the fight to catch body invaders.