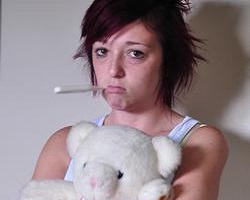 When we get sick and show symptoms of illness, it is most often because we are fighting off pathogens. Image by Courtney Carmody.

You wake up and for a few seconds, you feel okay. But when you sit up, it suddenly all hits you. Your head feels stuffy, your nose is running, and you feel hot all over. These symptoms are all signs that your body is fighting an infection. But how did you get an infection?

Infections happen when you get a pathogen inside your body. Pathogens are parasitic, and survive by taking energy from the host they are inside. In this case, you would be the host. Some pathogens also produce toxins that can hurt you if they are released. So what exactly is a pathogen?

You might better recognize three common kinds of pathogens: Bacteria, Viruses, and Fungi. These three kinds of organisms are very different from each other.

Here we can compare a human hair to the scale of fungi, bacteria, and viruses.

Bacteria are tiny, single-celled organisms that are found almost everywhere. There are bacteria on your desk, your skin, inside you, and even on this computer screen. Most bacteria are not pathogens. This means that for the most part, they don't cause disease. 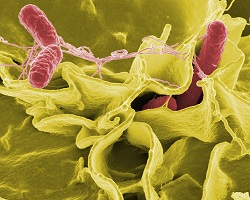 This picture shows bacteria (pink) attacking some skin cells (yellow). Bacteria are considered simple cells because they don't have a nucleus. Image by NIAID.

However, when a bacterium that causes a disease finds its way inside your body, you can get sick. Sometimes you get sick directly because of the bacteria, and sometimes it’s because of a bacterial toxin. Common infections that are caused by bacteria include pink eye and strep throat.

You probably recognize a common kind of fungus, the mushroom. Mushrooms aren’t the only kind of fungus, though. They actually make up an entire kingdom of life and, while most are not harmful to humans, a few of them are pathogens.

For example, the fungus Epidermophyton floccosum is often responsible for the condition athlete’s foot. This fungus is much smaller than the mushrooms we are familiar with. You usually need a microscope to see it.

Fungi survive by getting energy from other organisms. Often, they do this by feeding on the decaying remains of plants. Similarly, many fungal pathogens feed on the nonliving outer layers of our skin. It’s this feeding that leads to the itching and peeling associated with athlete’s foot or ringworm. 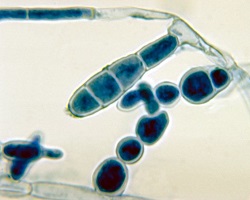 This fungi, Epidermophytom floccosum, is often responsible for athlete's foot. Image by PD-USGOV-HHS-CDC.

Some fungi also produce toxins, called mycotoxins. The most common way for humans to be exposed to mycotoxins is by accidentally eating poisonous mushrooms.

Viruses are the smallest common pathogen. They are so small in fact that many of them actually infect bacteria. They are different from other pathogens because they cannot reproduce on their own. Viruses take over the cells they infect and use that cell’s own processes to create more copies of the virus. We call this replication.

Sometimes, a virus can wait inside a cell for a long time before it starts replicating. This means that you can get sick long after you are exposed to a virus. The Chicken Pox is an example of a common viral infection that often remains dormant, or unnoticed in the body. Varicella zoster doesn’t leave your body after you recover from the Chicken Pox. It remains dormant within you and can resurface to cause a condition called shingles later in life. 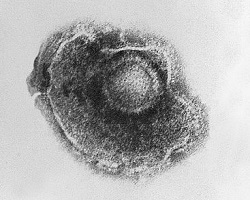 A microscopic image of Varicella zoster, the virus that causes the chicken pox. Image by PD-USGov-HHS-CDC.

Many common conditions can be attributed to viral infections. The flu, the common cold, warts, and cold sores are some examples. A cold is an infection of the upper respiratory system. Colds can be caused by more than 200 different viruses. The flu, however, is only caused by three virus types: influenza A, B, and C.

Symptoms that include a scratchy throat and stuffy nose come on much more slowly for the cold than the flu. With the flu, symptoms are more severe and also usually include fever and chills. Fevers tend to be higher in children than in adults. Upset stomach is not usually a symptom of either the cold or the flu. If you have signs of the flu and see a doctor within two days after symptoms start to show up, they might be able to give you antiviral medication. These medications can decrease the time you show flu symptoms. 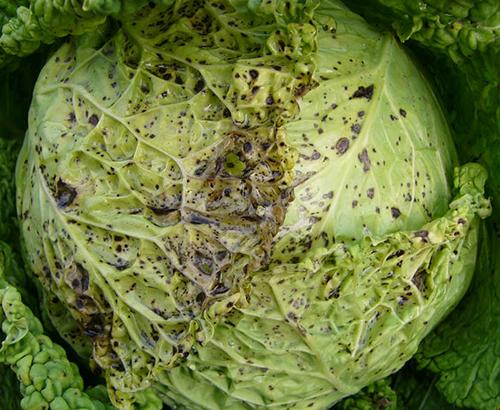 Animals aren't the only organisms that can be infected by pathogens. This cabbage has brown spots due to the turnip yellow mosaic virus.

This activity has a companion experiment Let the Germs Begin.