Ecosystem process: the cycling of nutrients, energy, and other matter and gasses through an ecosystem...more

Restore: bring back or reinstate, like bringing back animals or reinstating ecological processes.

Bringing Back the Wild Things 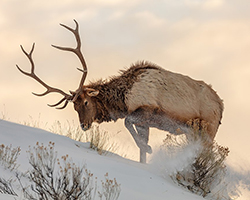 A healthy bull elk in winter. Click for more detail.

Snow crunches under your feet and the wind whips around you, whistling through the tall pines. As you hike across a small island, you come to a clearing where tiny tree trunks two to three feet high stick out of the ground. These were little cedar trees, but they have been stripped of their branches and gnawed on. A cracking sound to your left breaks the silence and you jump; you turn and see a herd of skinny elk. They are in search of food, but there isn’t much left on the snowy island. The herd is too large to live off this land, and there are no wolves to help control their numbers. What if we brought back the wolves to make the land balanced and healthy again?

Rewilding is bringing animals or plants back to an area from where they have disappeared. The point of this is to restore biodiversity and processes that have been lost in some ecosystems. For example: when bringing back wolves to an area that helps control some populations (like moose) and allows others to recover (like plants). 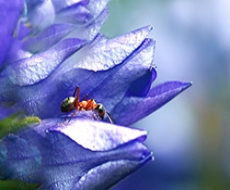 Ants, though small, are important contributors to ecosystems. Image by Kie-ker via Pixabay.

Bringing species back to a forest takes a lot of research and work. Scientists have to take many factors into account. They need to know if the particular species, like wolves, lived there before. They have to find out if there is a new animal that took the wolves’ spot, like coyotes or coywolves. Scientists also need to know which animals and plants are in the ecosystem and how they will react to the wolves. It’s also important to know if the food the wolves used to eat is still available in the forest. There are many other things scientists have to take into consideration as well, such as people's fear and anger toward animals like predators, and the costs of these projects. 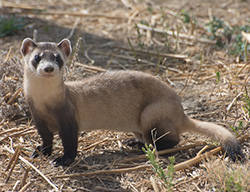 The endangered black-footed ferret is an important small predator. Click for more detail.

An area has three requirements to be able to support a re-introduction. These are: (1) large, protected reserves; (2) connectivity; and (3) keystone species. Large protected reserves are areas like National Parks where animals can find areas without people and cars. Connectivity means that animals are able to move from one reserve to another. This way, animals aren’t stuck in an area that is too small. Instead they can move from an area like a national park to a nearby national forest without crossing paths with many people. This is important to keep a variety of genes in the animal’s community. Connectivity is also important so that the animals can find enough food. Keystone species are important because they keep an area healthy and balanced. They are species that have a larger impact on the ecosystem than other species. They might provide resources to other species or keep numbers of other species in check.

Predators play a special role in many ecosystems, and they are often the keystone species. They are also usually the species that are re-introduced because people have tried to get rid of them in the past. However, other non-keystone species can be reintroduced as well. It depends on the needs of an area and what species are missing.

Rewilding can be done in a few different ways, depending on what’s best for a specific area and the goals of the project. The most common type of rewilding is when land being used by humans is left alone and allowed to return to its natural state. This is called natural succession. It can also be called regeneration, recovery, or de-facto rewilding. 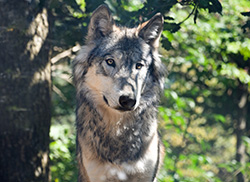 Wolves have been eliminated from many ecosystems. Image by Christels via Pixabay.

Another way is to add animals or plants to a forest or an area where they used to exist, like adding wolves to Isle Royale in the state of Michigan, in the USA. This is called reintroduction, or historical rewilding.

The third way is to restore species that have gone extinct, or to fill roles in the ecosystem that are currently empty. There are many different approaches to this type of rewilding. Scientists might restore species similar to the megafauna that went extinct in the late Pleistocene. The goal is to restore ecological and evolutionary functions that were lost when the original species died off roughly 13,000 years ago. This is called Pleistocene rewilding. Another approach proposes to use genetic technology to restore species like the woolly mammoth and return it to the landscape, an idea called “de-extinction.”

Howling wolf by Colfelly via Pixabay.

Challie Facemire. (2020, March 24). Where the Rewilded Things Are. ASU - Ask A Biologist. Retrieved February 2, 2023 from https://askabiologist.asu.edu/explore/rewilding

Challie Facemire. "Where the Rewilded Things Are". ASU - Ask A Biologist. 24 March, 2020. https://askabiologist.asu.edu/explore/rewilding 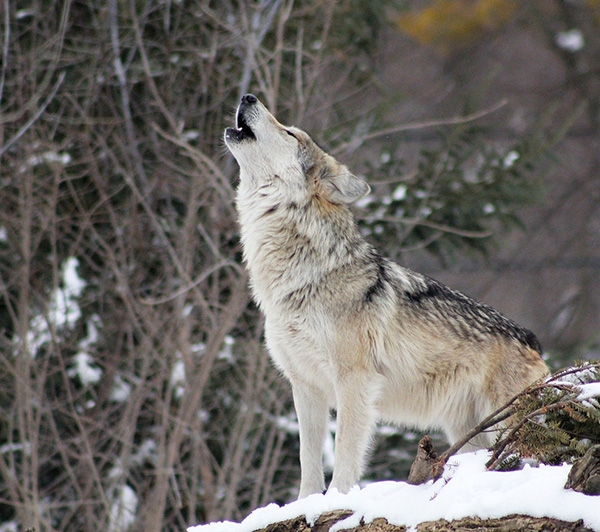 Wolves once roamed most of North America. Now they are found primarily in protected areas, like National Parks, where they can't be killed so long as they stay in the park.