Class: one of the levels biologists use to organize living things that are similar.

Retract: ability to pull or draw something back towards the body. A cat can retract its claws.

Bug – it’s a word you hear almost every day. There are bed bugs, computer programs with bugs, or maybe someone is bugging you. But did you know that scientists use “bug” for a very specific group of insects. That’s right, not all insects are bugs.

If all bugs are insects, but not all insects are bugs, how do you tell them apart?

Examples of insect proboscis - True bug (A), Ant (B) and Honeybee (C).

The key difference between true bugs and other insects is their mouth parts. True bugs suck. That’s right, the true bugs have specialized mouth parts used to suck juices. Mostly they suck fluids from plants, but there are some true bugs, like bed bugs, that feed on animals.

The sucking mouth part, called a proboscis (pro-boss-kiss), is different than that of other insects. Using a high power microscope, it is easy to see that true bugs have a mouth that looks and works differently than other insects. It actually looks like a long beak and works much like a straw you might use to drink from a juice box. If you look at the mouth parts of other insects with a beak-like proboscis, such as a honeybee or butterfly, you can see that the proboscis is retractable, by rolling it up. The proboscis of a true bug is not retractable. Insects with movable mouthparts allow them to move food from the source to their mouth. The proboscis of a true bug is more rigid and cannot be rolled up.

Why are only some insects called “true bugs?”

Biologists who name animals and plants are called taxonomists, and they are very particular about who gets named what. Entomologists, the people who study insects, use taxonomy to keep the huge number of insects categorized.  When they say “bug”, it means something very specific!

True bugs are listed within the order called Hemiptera. Insects in this order are different from other insect orders, such as Hymenoptera (ants and bees), Lepidoptera (butterflies and moths), or Diptera (flies and mosquitoes). If you look at the diagram below you can see that at the “class” category, arachnids and insects are separated into two different groups and as you go to the next category which is the “order”, true bugs are now separated into their own group which is different than the other insects. Bugs are placed into different groups because they have characteristics that make them look different from one another.

Will the True Bugs Stand Up?

True bugs include insects such as leafhoppers, aphids, cicadas, stink bugs, water bugs and yes those pesky bed bugs. They have many of the same parts as other insects in that they have an exoskeleton, segmented bodies, and 6 legs. However, they are different than insects in other groups. All true bugs go through what is called incomplete metamorphosis; which means they hatch as nymphs from their egg. A nymph is a miniature version of the adult bug.

Of the millions of insect species on earth, about 80,000 are true bugs, which can live almost anywhere in the world and can be found on land or in the water. They can range in size from very small (~1mm), such as bed bugs, to huge (15cm/6 inches), like the giant water bug. Next time you see a bug, try to see if you can identify if it is a “true bug” or just another insect.

Special thank you to Dave Pearson and Andrew Hamilton for their assistance with this article. 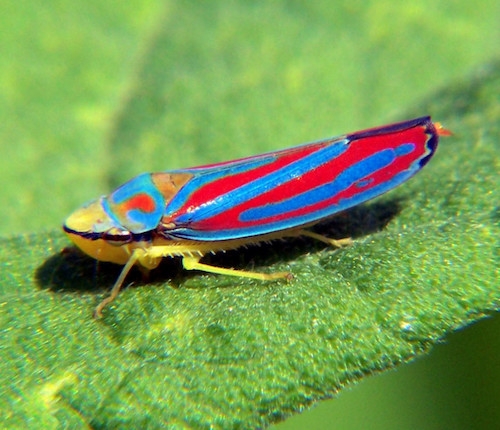