Hobgoblin: imaginary (made up) creature that can make trouble for humans... more

Scarecrow: human figure dressed in old clothes and placed in fields by farmers to frighten birds away from their crops... more

Where Did the Word "Bug" Come From? 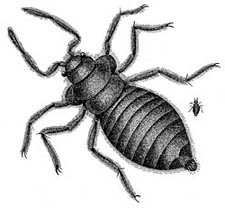 Could the Bed Bug (Cimex lectularius) be the first true bug?

Finding out exactly where and when words were first used is often not easy. People who specialize in words and their history are called etymologists, which sounds very close to the word used to describe people who study insects - entomologists.  So what's the story behind the word "bug?"

The word first shows up in the earliest English translation of the complete Bible. John Wycliffe (c. 1320-1384) led a group who translated the Latin version of the Bible into English. In the translated work the first form of bug appears.

“For whi as `a bugge, either a man of raggis, in a place where gourdis wexen, kepith no thing, so ben her goddis of tree, and of siluer, and of gold.”

In this case the word did not mean insect. It was instead either a hobgoblin or scarecrow. It was not until the 17th century (1601 - 1700) that “bug” began to be used to describe insects. It appears that the first insect linked with the word was the pesky bed bug. These insects would quietly feed on people at night, as if they had been visited by a hobgoblin. 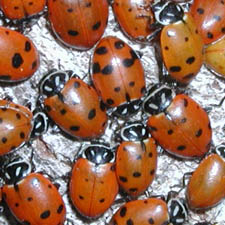 Lady Beetles are not true bugs even though some people call them ladybugs.

In the 18th century (1701 - 1800), scientist Carl Linnaeus helped establish the naming system that is still in use today. His system of organizing living things by their similarities is known as taxonomy. Insects that became grouped in the same order as bed bugs have since been called “true bugs.”

If you are wondering about the ladybug and if it is a true bug – it isn’t. These insects are actually beetles and have the common name lady beetle. In some cases you will see them called ladybugs. Notice the name is spelled as one word and all true bug names are spelled with two words when linked to the word “bug.”