Observe: to watch (someone or something) carefully. To notice something or someone as being different or out of the ordinary.

Percentage: a specific part (portion) of something. A fraction of a larger item or group.

Substantial: something of importance, size, or worth.

How to Study a Native Bee

Of the thousands of native bee species in North America, only a relatively small handful has been studied to any degree. So if you happen to come across a bee that is mating in substantial numbers, you can probably make a scientific contribution by carefully recording what is happening. At the very least, if you take the time to learn what it is doing, you can become a world’s expert on that species. It is fun to be a world’s expert on anything.

Bees mating on a desert marigold.

The first “trick” is to go to natural places when plants are in flower and so could be providing food for mother bees to supply to their grubby offspring.  Many bees mate directly on the flowers that females visit. This could be a good place to begin. I recently did this when inspecting desert marigolds. If you can find a species whose males find females at the flowering foodplant you could use this as your observation point.

In the case of Centris pallida, the palo verdes and ironwoods often bloom profusely in May, offering billions of nectar and pollen-containing flowers to their pollinators, of which the digger bee is one. I happened to visit the Blue Point Bridge area on the Salt River below Saguaro Lake near Phoenix, Arizona at the right time in the early 1970s. When I saw all sorts of gray bees flying low over the ground, I decided to see what they were doing.

Not All Bees Pack the Same Type Of Sting 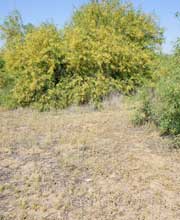 The second “trick” is not to be afraid of native bees. The males lack a stinger and so cannot sting you even if they wanted to. The females do have the ability to sting but to get stung, you would have to do something dumb, like trying to pick up a female, which they do not like. Even if you do get stung, the pain is much less than that when you get stung by a female honey bee worker.

The third “trick” is to be patient and observant. Take notes, measure what you wish to measure, ask yourself questions. When I studied male digger bees, I recorded the outcome of digging attempts by males (once I realized that the diggers I was watching were males). 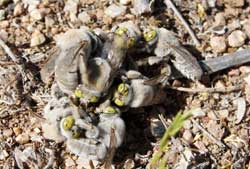 A tight ball of male bees clustered around a female be who has just emerged from the ground.

If you have access to an insect net, it would be good to collect a specimen or two, which you can slip into a vial and put in a freezer at home. Then, if you live near a university with a biology department, you might be able to contact a professor there who can help you get the bees identified, a key step to learning what, if anything, has already been written about the species you have discovered. With luck, a helpful professor can get you started on a career of insect research. Many people find this work to be a great deal of fun and worthwhile. It offers an opportunity to learn about nature and perhaps unlock the answer to a question that has been puzzling scientists. 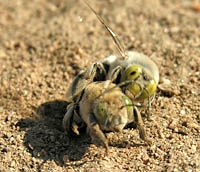 Male Centris pallida bees help the females climb out of their underground burrows in order to mate with them.

How to Study Bees | Ask A Biologist
Skip to main content