Brood cell: a cell or chamber used for the rearing of a larva. Honeybee combs have individual chambers for raising each larva. 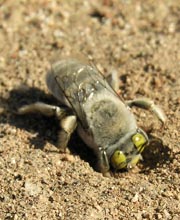 A male bee digs for an emerging female.

How Do Males Find Females?

I suspected that males had evolved their incredible antennae over time as a means of outracing rival males to mate. Males that could find and dig down to unmated females probably had a better chance of mating with these females and passing on their genes to the next generation than males with less sensitive “female scent” detectors, which would have to wait for females to come to them. If competition for mates in the past was responsible for the males’ mating tactics, then I could expect to see competition in the present as well. And I did.

Many males appear to be searching for females in the same areas. Moreover, when one male finds a digging spot, others often intrude and try to force the first male away so that they can take over the mini-burrow and the female that might be a short distance underground. 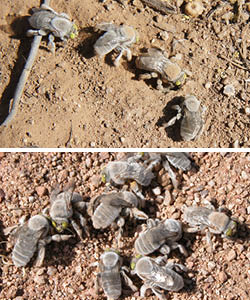 Many male bees search for emerging females in the same areas.

A male that has discovered a likely spot therefore often has to fight with others before and immediately after a female emerges.

Competition for mates is fierce because females that mate once become unwilling to mate again thereafter. In other words, the only way for males to pass on their genes is to find and mate with virgin females while keeping other males from disrupting their mating. The pressure to find virgins has evidently favored males that happened to be super-sensitive to female odors, so sensitive that today’s males can find females in the process of emerging, rather than after they have emerged.

In keeping with the likelihood that mating competition among males has shaped the tactics they use, we now know that males pass their sperm to females immediately after copulation begins. In this way, they succeed in passing on their genes quickly as possible. As soon as this phase is over, males usually fly off with the female, carrying her up from the ground and away from rivals that will attack pairs on the ground in an attempt to steal the female from her discoverer.

Males pass their sperm to females immediately after copulation begins. Later, the "post-copulatory courtship" keeps the female bee from wanting to mate with any other bees.

The pair zooms off to a nearby bush or mesquite where the male strokes the female with his legs for a few minutes and produces a buzzing sound, probably by contracting muscles in his thorax.

I did some more experiments with a fellow entomologist, Steve Buchmann, in which we showed that if the female did not experience this “post-copulatory courtship” phase, she was very likely to permit another male to mate with her. If so, she would in effect add the second male’s sperm to those she had already received, thereby diluting the reproductive chances of the first male that mated with her. But if the mated female had received this stimulation, she was unwilling to allow another copulation to occur. This greatly increased the odds that her partner would be the one to add his genes to any egg she chose to fertilize with sperm before laying the egg in a brood cell.

The male digger bee’s special skills have therefore been shaped by reproductive competition from other males. As a result of this competition, males sniff out hidden females, defend the females they find (or steal them from other males), quickly pass sperm to their partners when they have the chance, and provide their mates with signals designed to keep them from ever mating again. These bees tell us that every insect species deserves someone to document their capabilities. I am happy to have been the one to study Centris pallida. Remember, there are hundreds more bee species out there, ready to entertain future entomologists.

Competition is fierce among male digger bees for burrows that may have females in them. Watch a male digger bee uncover a burrow in the hopes of finding a female. Click the icon in the lower right of the video to view full screen.