Prevail: to be successful and win. To prevail over an enemy.

At edges of the Valley, desert hikers in the spring sometimes spy yellow stripes shimmering and snaking 20 feet or more across the ground.

They are seeing legions of leafcutter ants carrying home petals of paloverde blossoms. These ants stay busy other seasons, too, though with less flamboyant booty, such as bits of green or browned leaves. What they do below ground is even more curious than the foraging processions on the surface.

They are farmers and baby robbers. The workers spend their lives serving their younger sisters, their mother, and her unrelated co-queens, without ever producing offspring of their own. They can have many different types of jobs, dividing the colony into different classes, or castes.

"It's one of the world's most fantastic ant species, and it lives right in South Mountain Park." said Arizona State University biologist Steve Rissing.

Leafcutters are not leaf eaters. They use the plant matter they gather on the surface as fertilizer to grow underground gardens of fungus, then they eat the fungus. The fungus has enzymes to digest the cellulose in the plant matter, but the ants don't. The underground fungus gardens are about the size of a softball. The queens bring the some of the fungus with them when they leave to mate and begin a new colony. 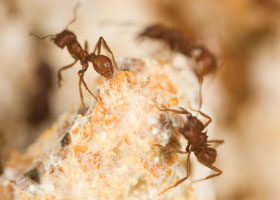 Leafcutter ants don't eat the leaves they gather. Instead, they use the leaves to grow fungus gardens.

"Just before they fly out of the nest, they go to the fungus garden, just as you might take some of your mom's sourdough starter with you if you were moving away," Rissing said. "They tuck it up under their mandibles and fly away."

Mating-flight season for local leaf cutters comes in late summer or early fall. They haven't flown yet this year, but probably will if the area gets a drenching rain in the next few weeks, Rissing said. Some years pass without any flights, however.

Only well-established colonies produce new queens and males. Hundreds of those winged forms emerge from each colony the morning after the proper rain. The males just mate, or try to unsuccessfully, then die. The new queens often team with each other, from their own colony or from unrelated colonies, to begin digging a new nest.

Favorable nest sites under desert trees are at a premium. More queens try to start new colonies in those sites than the sites can support. The colony founders begin a life-and-death race with founders of other new colonies nearby. They lay eggs, grow fungus and feed the fungus to the hatched larvae. When the larvae mature to adults, those new workers raid nearby colonies to steal those colonies' babies. "Each new colony raids others, and generally the one that produced the most of its own adults fastest is the one that prevails and survives," Rissing said. 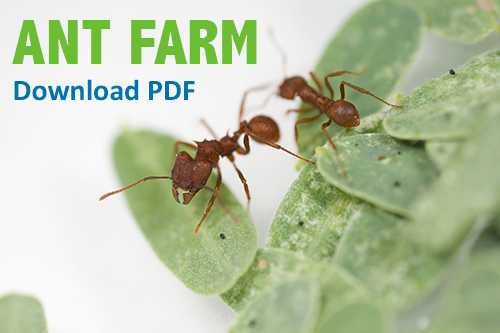