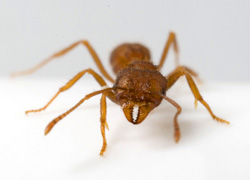 Ants are everywhere - they thrive in forests, fields, deserts, and cities all over earth. But what is the secret behind their success? Like humans, ants are social. They live and work together in highly organized societies called colonies. In fact, most ant colonies are so united toward the common purposes of survival, growth, and reproduction that they behave like a single organism, or a “superorganism.”

Just as an individual ant has different body parts that fit and work together, an ant superorganism has multiple colony members that cooperate to accomplish extraordinary feats. This social behavior gives ants a major advantage over solitary insects and other animals. Let’s take a sneak peek inside the secret society of an ant superorganism. 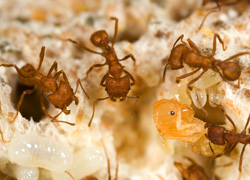 Ants always put their families first. Each colony is a close-knit family, usually including a mother (queen), her adult daughters (workers), and brood (eggs, larvae, pupae). During the mating season, new queens and males may also hang around the colony, but not for long. These different types of ants represent the stages of a complex individual life cycle.

In addition, ant superorganisms undergo their own sequence of changes called the colony life cycle. The smallest ant colonies contain a queen and just a few workers. The largest have many millions of workers, more populous than any human city!

Ants build their homes in all sorts of places. Many species dig underground nests and/or build mounds of soil. Others live in leaf litter, acorns, or rotting wood on the forest floor. Some ants prefer to take cover underneath rocks, which can also provide warmth. There are even ants that nest only in trees. Ants are excellent architects - their nests are designed to provide just the right environment for larvae to grow. Some nests even have a built-in ventilation system to circulate fresh air. To watch ants build a nest, you can keep them in an ant farm.

An ant colony is like a factory. Nestmates work together to convert resources (food) into products (more ants). This process is made more efficient through division of labor, where different individuals specialize on different jobs. The queen has the very specific role of laying eggs, which she spends most of her life doing. Worker ants perform other duties, often depending on their age. Younger ants work inside the nest, taking care of the queen and her brood. Older workers go outside to gather food and defend the nest against enemies. Despite her size and royal title, the queen doesn’t boss the workers around. Instead, workers decide which tasks to perform based on personal preferences, interactions with nestmates, and cues from the environment. 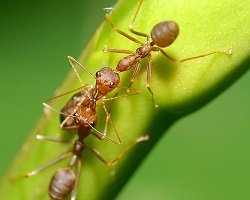 Members of an ant colony ‘talk’ with one another to coordinate their activities, but they never have to raise their voices. Instead, ants communicate mainly using chemicals, which they smell with their antennae. Workers release pheromones with specific messages, such as “Follow me to food!” or “Attack the intruder!”.

Nestmates recognize one another by chemicals that cover their bodies. The queen is coated with a unique blend of chemicals that advertises her presence. In addition, ants can also use touch and vibration to communicate in some situations.

Two Thousand Heads Are Better Than One

Each individual ant has a tiny brain. But all the ants of a colony combined are pretty smart. Ant superorganisms can solve difficult problems by processing information as a group. For example, a colony can compare potential nest sites before collectively choosing the best one. A solitary insect would not be able to weigh as many options, and could more easily make a mistake. To learn more about the interesting ways ants make decisions together, listen to the podcasts by ant scientists Bert Hölldobler and Stephen Pratt, linked to your right in the sidebar.

One ant by itself cannot do much harm to many larger animals. But an ant colony is a major force to be reckoned with. Hunting in groups allows ants to overcome much bigger and stronger prey. By teaming up, ants can even defend their colony against mammals. You may have been unlucky to experience such an attack first hand! 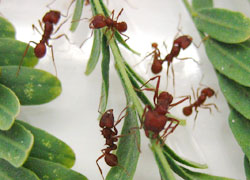 Other ants are more peaceful farmers. For example, leafcutter ants collect vegetation to grow nutritious fungus gardens inside their nests. To learn more about leafcutter ants, check out a leafcutter ant colony. Some ants make a living as ranchers. They herd plant-sucking insects like livestock and feed on their sweet leftovers. Such agriculture is a group effort in ants and humans alike.

The Ants Go Marching… to War

Ants are very loyal to their own colony, but they can be quite nasty toward outsiders. Competition among colonies for food and other resources often leads to aggression. Many species establish a territory around their nest that is off-limits to neighboring ants. If members of a rival colony invade, all-out war can erupt. Workers sometimes sting, spray, and/or bite to the death during these battles. Thus, the worst enemy of ants is other ants, not humans.

Read more about: Secrets of a Superorganism 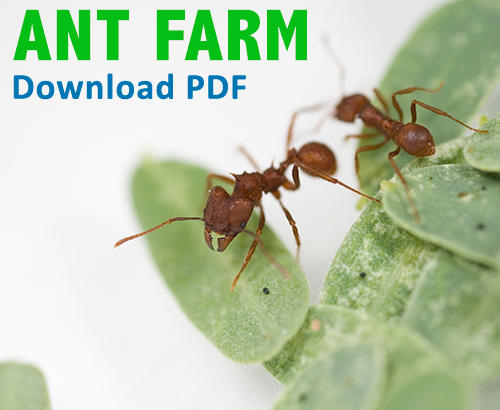