Instar: stages in the growth of a larva.

“Giant baby is bigger than its parents!” may make a great cover story for a magazine that publishes fake news, but in the world of moths and butterflies, it isn’t unusual for the juvenile caterpillar to weigh more than the adult moth or butterfly.

One such insect is Manduca sexta, also known as the tobacco hornworm or hawkmoth. In this species, juveniles weigh almost five times as much as the adults. It has four main life stages: the egg, the juvenile or larva, the pupa, and the adult. Between these four life stages, the hornworm makes some astounding changes in size and form.

Hornworm eggs start out at a tiny 1 millimeter in length—about the size of a pen tip. The eggs take a couple of days to hatch into larvae, and then the magic begins. Over a short three weeks, a hornworm will grow from about 0.01 grams to 12 grams. That is more than a 1000-fold increase in mass, about the same as if a housecat grew to the size of an elephant!

Hornworms grow more than 1000 times larger in mass, the same as if a housecat grew to the size of an elephant!

During this period of speedy growth, the tobacco hornworm will shed its waxy skin, or cuticle, four times. This process is called molting and allows the larva to continue growing. Without molting, the cuticle would be too small, and the larva wouldn’t be able to grow—this would be like wearing shoes too small for you that stunt the growth of your feet.

The growth period between molts is called an instar. The larval stage consists of five instars (four molts). During the final instar, the larva prepares for metamorphosis, the process by which the tobacco hornworm caterpillar is transformed into an adult hawkmoth. Once the caterpillar reaches a large enough mass called the critical weight, the process that will trigger metamorphosis begins.

First, the caterpillar goes into a “wandering stage”, where it stops eating and searches for a site to transform or pupate. Pupation is the process of forming a hard brown shell, similar to a cocoon. This shell protects the tissues inside the pupa that are involved in the transformation from a caterpillar to a moth. During this process, the pupa will not be able to move. To stay safe from predators that might eat them, caterpillars will often wander into a hole in the ground to pupate. 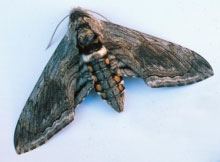 Hornworm metamorphosis takes approximately three weeks, after which the moth emerges. During pupation, the 12 gram caterpillar is transformed into a 2 or 3 gram adult moth. The newly hatched adults mate during their nocturnal activity and the females deposit their eggs on the underside of tobacco plants. Then the cycle begins all over again.

The role of temperature

Temperature changes over the arctic over 28 years. Click on the image to see a larger version.

For insects such as the hornworm, temperature has a large effect on growth, be it through changing the rate of growth or the time over which an animal grows, including the timing of metamorphosis. This means that a world that is warming or cooling could mean a lot of changes for temperature-dependent animals like insects.

Scientists are currently trying to learn about how the changes in climate that are occurring may affect animal development and survival. This is especially important for insects like the hornworm. 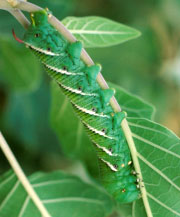 In a world filled with small caterpillars, having such a large body that is affected by temperature makes hornworms useful for scientific research. All of their tissues are larger and easier to see or work with, and they are easy to raise and handle in a laboratory setting. Most importantly, hornworms can help us learn about the effects of temperature and climate change on animal development and the timing of life cycles.

All of these characteristics have made the hornworm a species that is very useful for learning about other insects. This has made them what we call a “model organism.” This doesn’t mean that they pose for pretty pictures (although their bright green color does make for great photos), but it means that hornworms are an insect that we can easily use to learn more about insects and climate change in general. Seems like a pretty big job for such a big baby. 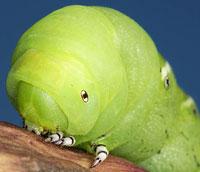