El Niño-Southern Oscillation (ENSO) Cycle: changes in the temperature of the Pacific Ocean at the equator that causes complex weather patterns.

Milankovitch cycle: long term changes in the Earth’s orbit around the sun.

Solar cycle: changes in the amount of activity on the sun’s surface. 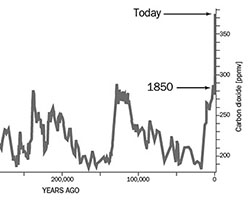 Carbon dioxide goes through natural cycles over hundreds of thousands of years. Click for more detail.

Earth goes through many natural cycles and climate is no exception. Throughout Earth’s history the climate has acted just like a rollercoaster. There have been times when it has been warmer and times when it has been cooler than what it is today. Humans have only been around for about 200,000 years but the climate has been changing for much longer than that. So what might cause climate to change naturally?

You may know that Earth orbits the sun in a shape called an ellipse. But the placement of that ellipse doesn’t always stay the same. Milankovitch Cycles describe the changes that happen to Earth's orbit around the sun and how it is tilted on its axis. These cycles occur about every 100,000 years and change the amount of solar energy that reaches Earth’s surface. 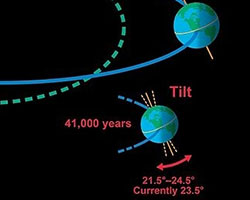 The Milankovitch Cycles describe changes in Earth's movement that occur over long periods of time. Click for more detail.

When there is less energy, the climate enters a cold cycle and huge glaciers expand across Earth’s surface. The last of these last ice ages ended about 7,000 years ago. When more energy reaches Earth, the climate becomes warmer.

The sun also goes through solar cycles of high and low activity. Although this could affect our climate by changing the amount of energy coming off the sun, scientists have only been able to study the sun with satellites for about 40 years. This makes it hard to know the effects over longer time periods. 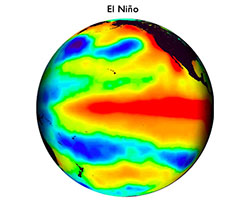 El Niño and La Niña can be the source of short-term climate cycling. Click for more detail.

These two phases can also cause some areas to get more rain and snow and other places to get less. When all the weather is averaged to get the climate, these exceptional events can cause the whole average to become higher or lower. 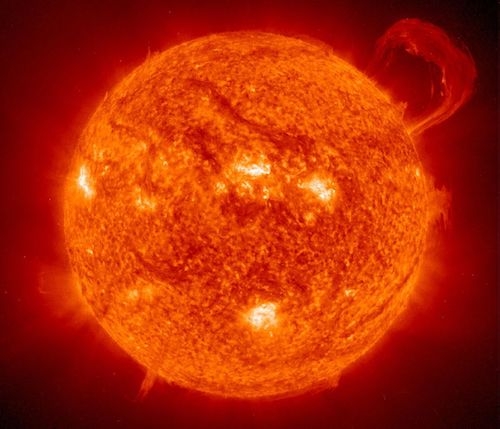 The sun goes through solar cycles, when activity is higher and lower at different times. Scientists are still learning how this affects our climate on Earth.