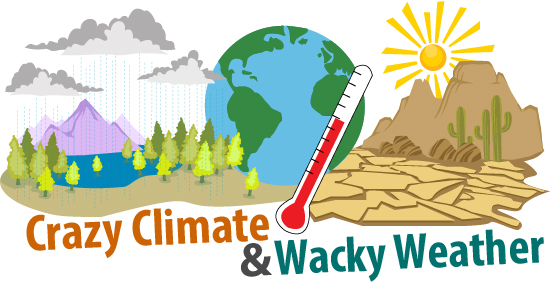 Weather: short-term conditions of the atmosphere. 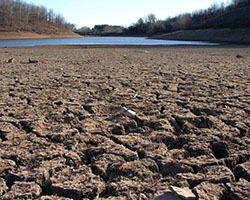 Some parts of the world, like the western United States, are already experiencing more frequent or severe droughts. Click to enlarge.

People are talking about it all over the globe. In some places, storms are more frequent, in others, temperatures are changing and droughts are longer. So what’s going on with all this wacky weather?

In today’s world, climate change is a popular topic, as it stands to affect the entire globe, including many of the plants and animals that we depend on to live. But what exactly does this crazy climate mean? What is causing it and why should we care? To understand the changes in Earth’s climate, we first need to look at how climate is different from weather.

Weather refers to the short-term conditions of the Earth’s atmosphere. When a news reporter talks about the amount of precipitation that fell yesterday or how hot or cold it is today, they are talking about the weather. These short-term changes happen from day to day and across seasons. For example, some days it is sunny and warm and we can play outside. Other days it is rainy and cold and we have to stay inside. 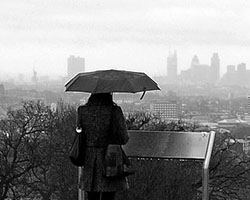 If you own an umbrella, you likely live in an area with a rainy or seasonally rainy climate. Image by Duncan Harris.

Climate happens over much longer time periods. If we took the average of all the weather for 30 years, then we would have the climate. It describes what we would expect the weather to be. For instance, we expect the climate of deserts to be warm and dry and the artic to be cold and snowy.

When someone talks about climate, they are not talking about a single weather event like a really hot day or a strong storm. They are talking about the long-term average conditions.

Here’s a popular way to remember the difference between climate and weather:

In areas with a very wet climate, like the Pacific Northwest, people are likely to own an umbrella because it is often rainy there. However if there is no chance for rain in the weather report, they may not take it with them for the day.

Around the world, the climate is changing. Temperatures are getting warmer and these changes are causing some places to get more or less rain than usual. Scientists know this is happening from studying Earth’s climates from over a million years ago. By studying these historical climates, they have found that Earth’s climate has changed many times and these changesarerelated to the amount of special gases in the atmosphere, called greenhouse gases (GHGs).

Greenhouses gases in the atmosphere work just like the glass of a greenhouse ceiling. The temperature inside a greenhouse is usually warmer than what it is outside. This warmth is from the sun’s energy passing through the glass but not escaping back outside. Inside greenhouses plants can still grow even when temperatures outside are cold. 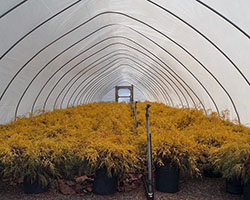 Greenhouses work in a way similar to the way gases affect the temperature of Earth. Click for more detail.

If you’ve never been in a greenhouse, think of getting in a car during a warm, sunny day. You might remember that it was a lot hotter inside the car than it was outside. Greenhouse gases in our atmosphere work just like the glass in the car. They let the sun’s energy pass through but do not let it pass back to outer space. This is called the greenhouse effect. It happens because lots of energy from the sun reaches Earth, but not all of that energy can leave.

Today, lots of people are trying to understand how and why climate is changing. Because plants and animals are adapted to the places where they live, changes in climate could make them unable to survive in certain places. If the plants and animals cannot move to another area or adapt to the new climate, then they may become extinct. Extinction means all members of a species disappear forever. If a species goes extinct, humans may lose the benefits it provides. 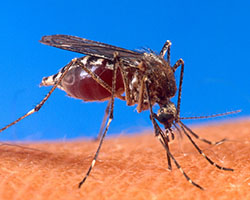 Climate change is already altering the ranges of some species, including mosquitoes, which can carry disease. Click to enlarge.

The amount of GHGs in our atmosphere and the climate has changed a lot in the past. These changes happened way before there were people and some of the changes caused species to go extinct. Many changes were due to the amount of specific GHGs in the atmosphere. Today humans use fuels like coal, natural gas, and oil. These release a GHG called carbon dioxide (CO2) into the atmosphere.

All of this CO2 is starting to affect the Earth. Continuing to increase the amount of this gas in our atmosphere will likely change the climate and could cause some species to go extinct. Because we depend on species for many different things, we do not want a changing climate to threaten their existence. This is why many people today want to decrease the amount of fossil fuels that we use. 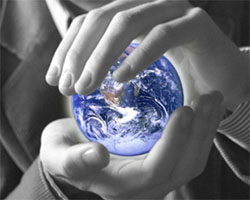 There are many small things you can do in your daily life to help protect the Earth. Image by Olivier Bresmal.

Although the Earth’s climate is changing, there is still time to help. One way to help could be to reduce CO2 emissions. Energy sources which produce GHGs are very important to our society but making little changes to reduce the amount we each use can make things better. To reduce the energy you use, you could:

Every little bit can help and if enough people take small steps, they can add up to a huge leap. 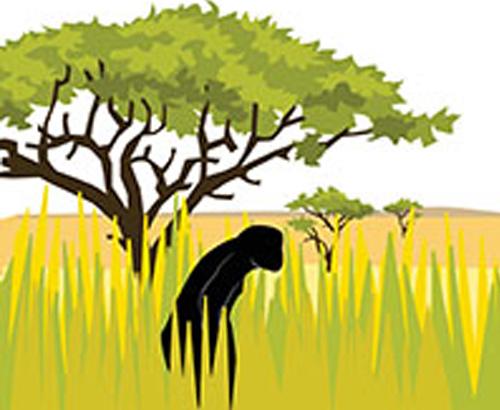 Learn how climate may have affected early humans in Ask An Anthropologist's story Changing Climates and Changing Faces.