What Is the Menstrual Cycle?

Fallopian tube: a structure inside female body that connects an ovary to the uterus.

Vagina: a part of the female body that connects the uterus the outside the body. 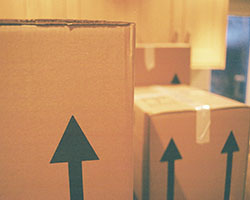 People face lots of changes in life, like moving to a different house or city. One change most females experience in their early teenage years is getting their first period. Like moving, getting a period can be scary or exciting. Understanding what is going on can help make it easier. Image by Nathan O’Nions via Wikimedia Commons.

When change happens, it can be exciting, scary, or both. People experience changes in different ways, like moving to a different city or meeting a new friend. Well your body experiences changes, too. And one important change in the female body is called the menstrual cycle.

The menstrual cycle helps to prepare a woman’s body to become pregnant. That is certainly a big change. But if a woman does not become pregnant during the menstrual cycle, then what happens? Her body experiences a different kind of change. That change is called menstruation, or a period. And just like moving to a different city or meeting a new friend, getting a period can be exciting, scary, or both.

In the Embryo Project article “Estrogen and the Menstrual Cycle in Humans,” writers explore how the menstrual cycle works and why it is important in the female reproductive system.

Why Do Girls Get Periods? 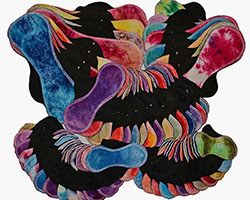 These are examples of reusable sanitary pads. You can wash the pads after every use. Some people use these because they don’t have access to disposable pads, while others use them because they want to reduce their waste. Image by LittleGumnut via Wikimedia Commons.

Women give birth to children everyday. And thanks to the menstrual cycle, a woman's body is prepared for nurturing a baby when she becomes pregnant. During the menstrual cycle, different hormones tell the female body to prepare for pregnancy. But if a woman does not become pregnant, she experiences menstruation.

Menstruation, or a period, is when blood and tissue are released from the vagina. Periods last for three to seven days, and they happen about every 28 days. But, some girls can get their periods every 21 days, and other girls get theirs every 40 days. Every girl is different, and that’s normal. Periods start happening around age 12 or 13. But again, every girl is different. There’s quite a complex process that leads to menstruation, and it starts in the brain.

The body needs to be prepared before the egg cell can start its adventure in the menstrual cycle. 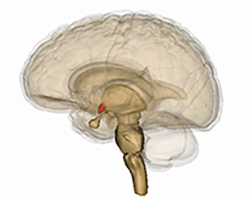 A period starts in response to signals from the brain. The hypothalamus is located near the bottom center of the brain, colored in red here. The pituitary gland is just below that. Those parts of the brain send out hormones that start the menstrual cycle. Image by Life Science Databases via Wikimedia Commons.

First, the egg cell starts in the ovaries. A woman is born with all of the egg cells that she will ever have. They live in her ovaries until it is time for one to start its adventure. But, they are not ready to continue in the menstrual cycle yet. In other words, they are not mature. When the pituitary gland releases hormones, the ovaries have the power to mature one egg cell.

Once that egg cell is mature, it pushes through the ovaries and into the fallopian tubes. Then, it has completed one part of its journey in the menstrual cycle — this is technically called ovulation.

No Fertilization, No Problem

While in the fallopian tubes, the egg cell can meet a sperm cell. This is called fertilization. Fertilization is the first step in pregnancy. To prepare for the fertilized egg cell, the uterus begins to line itself with a soft cushioning. This is called endometrial tissue, and it is filled with blood. The endometrial tissue provides important nutrients for the fertilized egg cell to develop into a fetus. 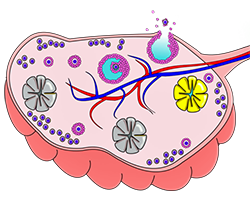 Females are born with all the eggs they will ever have. The ovaries (one of which is pictured here) store those eggs, and release one during each menstrual cycle. From there, the egg will either be fertilized or be expelled during a period. Image by Sheldahl via Wikimedia Commons

But what happens if the egg cell is not fertilized?

The very first egg cell to complete its journey from the ovaries to the uterus during a girl’s first menstrual cycle is something new for the body. After a girl’s first period, it will take time for her body to adjust to this change. Her second period may be a while after her first. But that’s normal.

Knowing how to take care of your period is an important part of menstruation. So, let’s talk about menstrual hygiene management.

Just like there is shampoo for your hair and soap for your body, there are also things to manage your period. There are pads, underwear liners, and tampons (just to name a few). 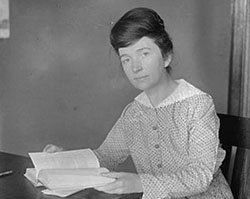 In addition to her book on puberty, Margaret Sanger founded the group that we know today as Planned Parenthood. That organization provides many women with reproductive healthcare. Image from Library of Congress via Wikimedia Commons.

Girls have had those things to manage their periods for a long time. Ancient Roman women even made tampon-like devices out of wool. And in 1875, Lydia Pinkham used herbs from her garden in the United States that helped get rid of cramps and headaches during periods.

A Shared (Yet Different) Experience 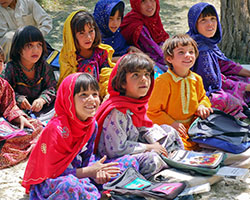 Having a period is an experience most girls share no matter where they come from. But, girls from separate places might manage periods in totally separate ways. Image via Piqsels.

Take for example a small village in Uganda, Africa. Some girls in the village sew pads made out of cloth, which they can wash and reuse for a long time. That might be really different from what girls in other countries experience. But, cloth pads are friendly to the environment and cost less money than other pads.

No matter how long a girl’s menstrual cycle is or how she manages her period, all girls do share something in common when it comes to menstruation. And that is that all girls’ periods are nothing to be embarrassed about. The menstrual cycle is a normal biological process that most girls around the world experience. So, don’t be ashamed if your body experiences this change.

This Embryo Tale was edited by Dina Ziganshina and is based on the following Embryo Project articles:

Emily Santora. (2022, February 03). What Is the Menstrual Cycle?. ASU - Ask A Biologist. Retrieved December 6, 2022 from https://askabiologist.asu.edu/period-cycle

Emily Santora. "What Is the Menstrual Cycle?". ASU - Ask A Biologist. 03 February, 2022. https://askabiologist.asu.edu/period-cycle 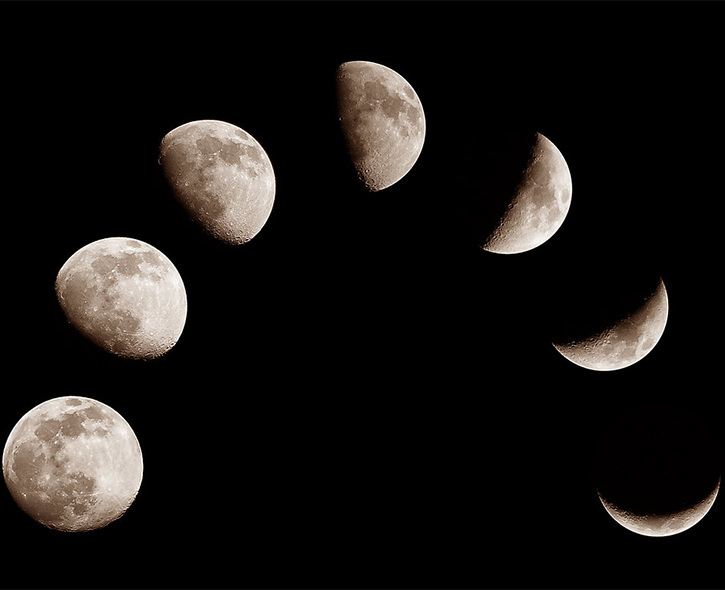 Humans have associated the menstrual cycle with the moon since ancient times. That's because the moon cycle lasts about as long as the average menstrual cycle: 29 days. The moon doesn't directly control people's menstrual cycles, but the two cycles still might line up as a coincidence.

What Is The Period Cycle? | Ask A Biologist
Skip to main content